The New Orleans Economy Since Katrina

On August 29, 2005, Hurricane Katrina slammed into the Gulf Coast area, causing $125 billion in property damage and more than 1,800 deaths. According to U.S. Census Bureau estimates, in the July 2005 the population of the New Orleans-Metairie-Kenner metropolitan area was area at a shade over 1.3 million, essentially unchanged since 2000. By the July 2006 count, dropped to 978,000. The population has rebuilt slowly since then, up to nearly 1.2 million by July 2009, but remains below the pre-storm level. What about the economy of New Orleans? As I'll try to explain, it's a story with twists and turns, but perhaps without any clear policy implication.

Charles Davidson has written ""The Big Busy: A radical reset after the Katrina catastrophe is transforming the economy of New Orleans," in the Third Quarter 2013 issue of Econ South, published by the Federal Reserve Bank of Atlanta. He draws to some extent on data from the Greater New Orleans Community Data Center and its report "The New Orleans Index at Eight." For some of the good news, here's a figure showing job growth in various metro areas since 2008. New Orleans lost fewer jobs than the rest of the country. The group of "aspirational metros" is seven Southern metro areas with populations of more than 1 million that have seen at least 10% job growth since 2000: Orlando, Nashville, Raleigh, Charlotte, Austin, Houston, and San Antonio. Just the fact that job growth in those cities since 2008 are closely comparable to those in New Orleans since 2008 is a big change. 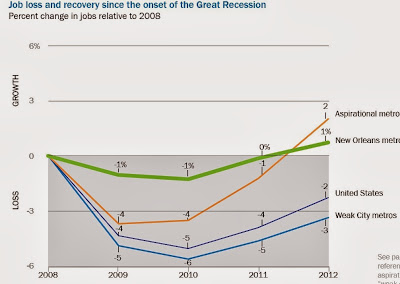 Here's a figure showing wage levels in New Orleans compared to the U.S. level. Notice that a substantial gap opened up between wages in the New Orleans metro in the 1980s and 1990s, but after 2005 that gap closed somewhat. Of course, there's a difficult question here. A substantial share of those who left New Orleans and didn't return after Katrina were those with lower incomes, whose presence had been holding down average wages. Right after the storm, the area received considerable funds from insurance companies and government programs for clean-up and construction. Thus, are these higher wages an artifact of altered population composition and demographics, along with a short-term gusher of rebuilding money? Or a phenomenon that might have longer-term sustainability? 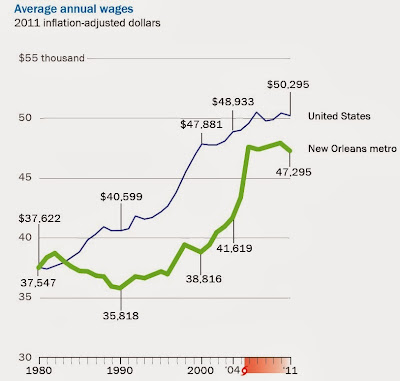 The argument that the gains in wages might be sustainable is based in part on the fact that New Orleans has experienced a wave of entrepreneurial behavior. This figure shows the number of individuals per 100,000 starting up businesses. New Orleans has risen from well below the U.S. average to well above it. 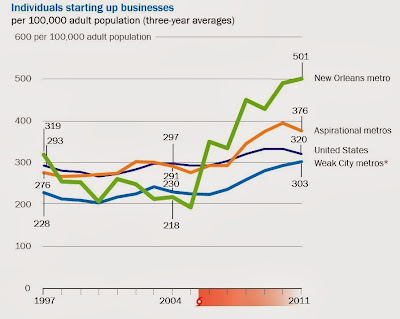 Much of Davidson's article is focused on how the storm transformed attitudes and governance in New Orleans. He quotes Michael Hecht, president of the largest economic development agency in the region, in this way: “New Orleans was like a morbidly obese person who ﬁnally had a heart attack that was strong enough to scare them, but not strong enough to kill them ... Katrina laid bare that this was a city and a
region that had been in slow, decadent decline, probably since  the ’60s ...”

The economic analysis of the city of New Orleans looks back  before Hurricane Katrina, and sees a city in long-term decline. Jacob Vigdor laid out the issues in "The Economic Aftermath of Hurricane Katrina,"
which appeared in the Fall 2008 issue of the Journal of Economic Perspectives. (Full disclosure: I've been the Managing Editor of JEP since the first issue in 1987.) Vidgor points out that many cities which have experienced disasters revert over time to their previous pattern of population: for example, this graphs shows population levels before and after for some cities that experienced heavy bombing during World War II, along with San Francisco and the 1906 earthquake, and Chicago and its 1871 fire. 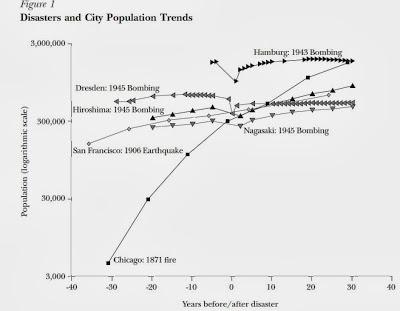 So what was the long-term trend for New Orleans before Hurricane Katrina? As Hecht says, it was "slow, decadent decline." Here's a figure from Vigdor showing the population of New Orleans as a share of U.S. population. It's no surprise that the New Orleans share of the U.S. population falls during the 19th century, at a time when the U.S. was adding states. What is perhaps more interesting is that the New Orleans share of the U.S. population was largely unchanged from about 1880 to 1950, when it began to decline. Vigdor argues that U.S. cities since 1950 have experienced two transforming changes: the rise of suburbs and a reliance on "knowledge-based" industries as the basis for growth--and that New Orleans essentially  missed both of these transformations. The population of the city of New Orleans itself had fallen from more than 600,000 in 1960 to less than 400,000 in 2005, before Katrina hit. 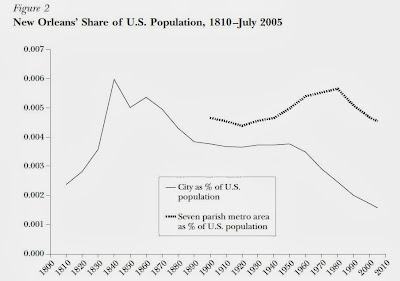 Vigdor also emphasizes a recent lesson in the economic thinking about cities in economic decline: When a city is declining, low-quality housing can become quite inexpensive. The result is that those with low incomes find it hard to leave the city, because although their prospects for earning income aren't good, their cost of housing is low, and moving to some other area with a higher cost of housing seems like a high-risk choice. But Hurricane Katrina blasted the New Orleans housing stock. Vigdor wrote: "The 2000 Census counted just over 215,000 housing units in the city of New Orleans. By 2006, the estimated number of units had declined to 106,000, of which more than 32,000 were vacant. Although these vacant units appeared intact from the exterior, most of them undoubtedly required signiﬁcant interior rehabilitation prior to occupation. Hurricane Katrina thus rendered two-thirds of the city’s housing stock uninhabitable, at least in the short term." To be sure, a substantial amount of this housing stock was eventually refurbished. But some of the cycle of low-income people living in low-cost housing was diminished, partly because a number of those low-income people ended up relocated in other cities, and partly because much of the refurbished housing was no longer as inexpensive as it had previously been.

Another piece of evidence is from another report by Vicki Mack and Elaine Ortiz of the Greater New Orleans Community Data Center, "Who lives in New Orleans and the metro area now? Based on 2012 U.S. Census Bureau data." Here is some of their data on education. The first bar, the parish of Orleans, is the same as the city of New Orleans. The next two bars show a couple of nearby parishes,  then the metro area around New Orleans. Notice that for the city of New Orleans in particular, the share of those with only a high school diploma fell sharply and the share of those with at least a bachelor's degree rose sharply. The main industry for New Orleans is tourism. But for a city hoping to build a stronger future in knowledge-based service industries, this rise in educational attainment is encouraging. 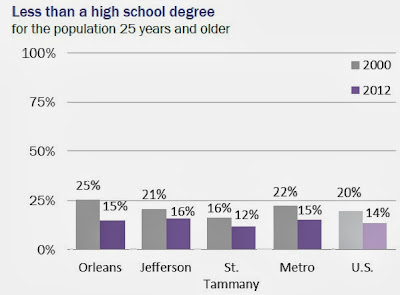 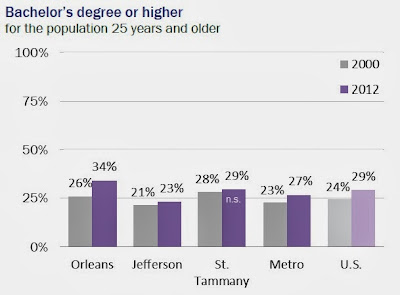 New Orleans as a city and a metropolitan area has a chance to move into the future with a different kind of momentum: that is, as a city in which tourism and dilapidation plays a relatively less important role, and entrepreneurs with higher education levels living in a refurbished housing stock play a greater role. But of course, these changes have arrived only after the gut-wrenching destruction and deaths from Hurricane Katrina, and the forces it created for resettlement and rebuilding.  There's no question that the economy, schools and governance of New Orleans circa mid-2005 were stagnating in a way that wasn't providing opportunity for many of its residents--but what a dreadful and disruptive way for some welcome changes to arrive.