The Global Sugar Market and US Sugar Consumption

Here's the pattern of American daily calorie consumption since the early 20th century. I suspect that some of the the ups and downs from 1900 up to about 1980 are due to issues with data and measurement, as well as social trends that came and went. But there's no mistaking the rise in the last few decades. 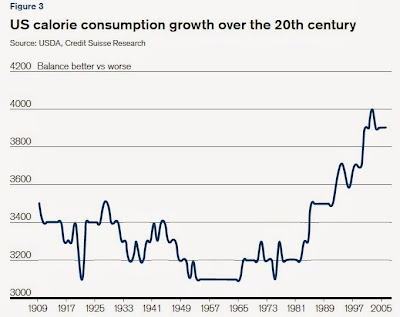 From an international perspective, Americans consume a large amount of sugar (whether from cane or beets) and related high-calorie sweeteners like high-fructose corn syrup. 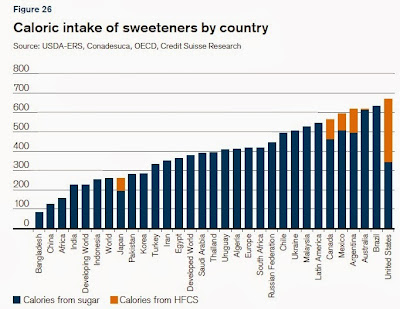 The Credit Suisse Research Institute ponders the economic background and health consequences of these patterns in "Sugar Consumption at a Crossroads," a report released in September 2013. A sizeable share of the report looks at the evidence linking sugar consumption in various forms to obesity, the health consequences of obesity, and possible policy options like a tax on sugary beverages.  Here, I'll stick to looking at patterns of consumption and production.

The report emphasizes that the growth in U.S. consumptin of calories can be linked to sweetened beverages: "Sweetened  beverages are now delivering  an increasingly greater percentage of the sugars that are ingested in an average diet. Between 1955  and 2000,  the consumption  of  soft drinks in the USA increased from about ten gallons/person to  54 gallons/person and then declined by around 20% until 2012, but with an equivalent increase in the consumption  of fruit juices and bottled water. According to  the USDA, the beverage industry now accounts for 31% of total sweetener  deliveries  and we estimate  that 43% of added sugars in a normal US diet come from sweetened  beverages. A similar stabilizing trend can be seen in most other developed markets, while consumption is still on the rise in emerging markets.: 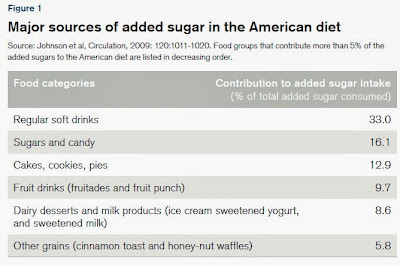 U.S. consumption of sugar and high-fructose corn syrup happens in the context of a global market. "The global sweetener market is estimated to be around 190 million tons of “white sugar equivalent,”
and is unsurprisingly dominated by sugar. Each of the major groups (high-intensity/artificial sweeteners,
sugar, and high-fructose corn syrup) has been growing at a similar rate of circa 2% per annum, though the most recent numbers have natural high intensity\sweeteners growing rather faster." 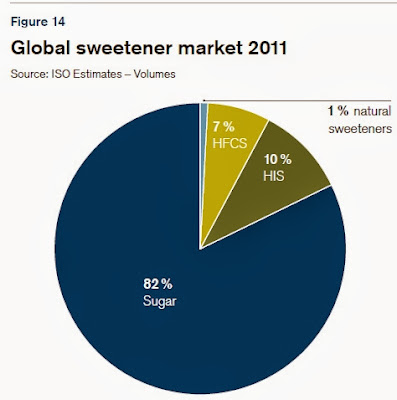 The actual price that consumers pay for sugar is highly influences by government policies: for example, the U.S. acts to limit imports of sugar as part of how it assists producers of beet sugar and high-fructose corn syrup.

"Many countries have regimes that protect the local production through various mechanisms including support prices, import restrictions, production quota, etc. Examples include the US Farm Act, the European Union Sugar Regime, or the Chinese government’s controls on imports. Put simply, the complexity of the infrastructure surrounding sugar is significant. Thus, the traded market (or the “world market”) is only 55–60 million tons, and is sometimes referred to as the residual market (where the sugar that is not a part of the special agreements is bought and sold). The largest producer of sugar by some distance is Brazil (22% of world production), followed by India (15%), China (8%) and Thailand (6%). However, India and China consume all they produce, so if we look at the supply to the “world market” instead, this is dominated by Brazil (supplies typically half the “world market”) and Thailand (10%–15%).

The “residual” nature of the world market has made the “world price” very volatile and sensitive to movements in global supply versus demand. ... Brazil’s cost of production is generally thought to be USD 18 cents/lb. and, in the long term, this should be the floor of the market. As we mentioned earlier, most of the markets are protected/controlled, which means the local price bears little significance to the world price – and trades at a significant premium (see Figure 20). These regimes have been in place for many years and are designed to protect the local farmers from the vagaries of the world price and guarantee them an economic return. ...
Finally, the market for HFCS [high fructose corn syrup] is similar in size to that of HIS, but is concentrated in three major markets: USA, China and Japan. The principal requirement for HFCS to flourish is government support. HFCS can only truly become established where it is allowed and where there is enough supply of starch. ...


Here's a figure showing the retail price of sugar. It can't be compared directly to Brazil's cost of production of 18 cents per pound, but the comparison is nonetheless interesting. 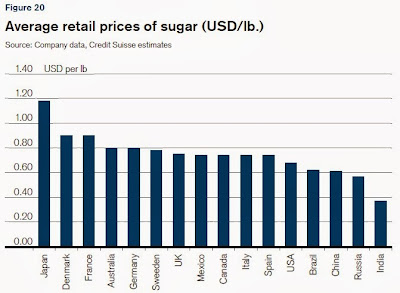 If one is concerned about the effects of high levels of sugar consumption on public health, what might be done? One option is to have a tax on foods that are high in sugar, which presumably would need to include not just sugared soft drinks, but also many kinds of drinks flavored with sugar or fruit juice, and other high-sugar foods. The Credit Suisse report leans in favor of such taxes; my own somewhat more pessimistic review of the workability and desirability of such taxes is here.

Another option is technological: that is, find a way to sweeten foods that doesn't have (many) calories. The difficult here is that while most societies have no regulation that limit loading up food and drink with sugar, they often have strict regulations about using alternative sweeteners. The Credit Suisse report writes: "The market for high-intensity sweeteners, both natural and artificial, is completely open, but the products are the most heavily regulated among sweeteners. These regulations vary from country to country. A high-intensity sweetener cleared in one country may be banned in another. The artificial sweetener industry’s profile on health is somewhat colored and many still see some of these products in a bad light. This is not the case for natural HIS, the largest portion of which is made of polyols (sugar alcohols)." At least so far, many people have more fear of how artificial sweeteners may affect their health than about how high sugar intake might affect their health. Also, many of the artificial sweeteners don't really taste like sugar.

A final option is some sort of social attitude adjustment. Just as shifts in social attitudes brought us the explosion in soft drink consumption, and more recently the explosion in bottled water consumption, a future change could mean lower consumption of added sugars. The Credit Suisse report has some suggestive if not dispositive evidence here. If one looks across regions of the United States, those regions with a higher average level of education and higher average levels of income are more likely to consume diet soda. Of course, this kind of correlation doesn't prove a cause and effect. But it does suggest that there are different cultural norms even within the United States about drinking sugared soda, and thus some hope for a healthier set of sugar-consumption norms to emerge. 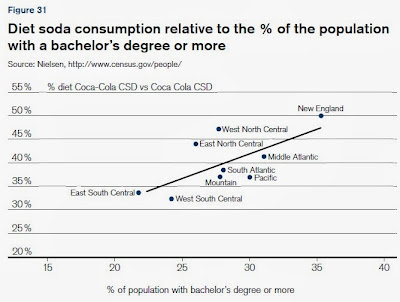 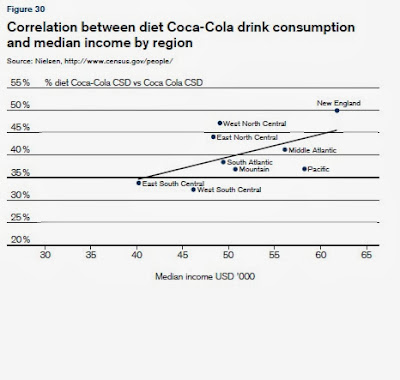