Credit Suisse has published its Global Wealth Report 2013. Reports like this help me update the mental picture of the world economy that I try to carry around with me. First, the quick overview of global wealth looks like this: Total world wealth was about $241 trillion in 2013, with a little under one-third in North America, a little under one-third in Europe, and the rest spread around the rest of the world. Average wealth per adult for the world economy was $52,000, with North Americans averaging about six times that amount, while those in Africa and India averaged less than one-tenth of that amount. 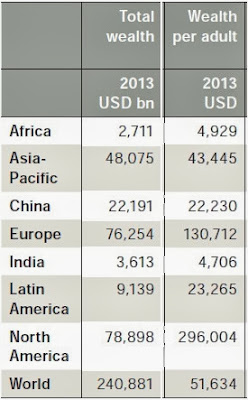 The report has lots of detailed information about how wealth is held in financial and nonfinancial forms, trends in the last year, and trends back to 2000. I found especially interesting the discussion of what happens if we look at the distribution of global wealth not as averages across regions, as in the table above, but across individuals?


"To determine how global wealth is distributed across households and individuals – rather than
regions or countries – we combine our data on the level of household wealth across countries with information on the pattern of wealth distribution within countries. Our estimates for mid-2013 indicate that once debts have been subtracted, an adult requires just USD 4,000 in assets to be in the wealthiest half of world citizens. However, a person needs at least USD 75,000 to be a member of the top 10% of global wealth holders, and USD 753,000 to belong to the top 1%. Taken together, the bottom half of the global population own less than 1% of total wealth. In sharp contrast, the richest 10% hold 86% of the world’s wealth, and the top 1% alone account for 46% of global assets."

Here's a pyramid of wealth for the world economy. The 32 million people around the world who have more than $1 million in wealth represent 0.7% of the world population, and hold 41% of the world's wealth. 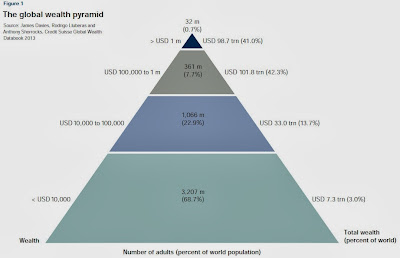 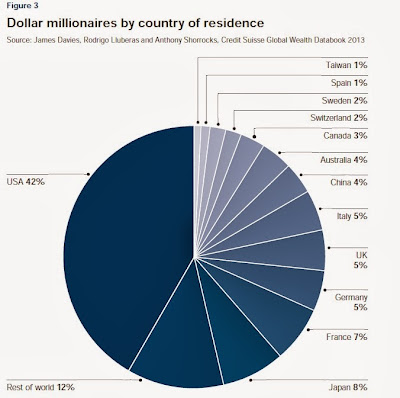 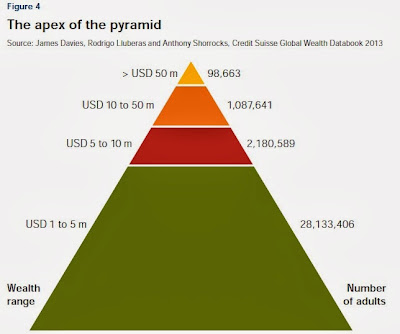 And finally, how about if we look at the ultra-wealthy, the top of the top of the wealth pyramid, meaning those 100,000 people with more than $50 million in wealth. What countries are they from? The United States is first on the list, which isn't big surprise, but I found it startling that among countries, China has the second-largest number of ultra-wealthy  people. 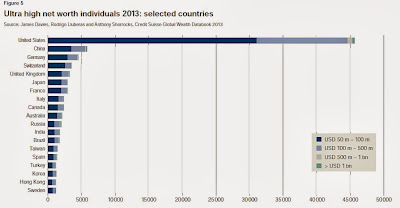