The last five years have brought economic policies that I would not have thought were even remotely possible if you had asked me in, say, mid-2007. The Federal Reserve and other central banks of high-income countries would push their policy-target interest rates to near-zero, and hold the rates there for years on end, while printing money to buy government debt? I wouldn't have believed it. The U.S. government would run budget deficits of 10.1% of GDP, 9.0% of GDP, 8.7% of GDP, and 7.0% of GDP in consecutive years, raising the debt/GDP ratio over that time from 40.5% in 2008 to 72.6% in 2012? I wouldn't have believed it. An IMF staff team led by Bernardin Akitoby offers some thoughts on how conventional wisdom about fiscal policy has change in the last five years in a September 2013 Policy Paper, "Reassessing the Role and Modalities of Fiscal Policy in Advanced Economies."

What was the consensus view on fiscal policy back in the Stone Ages of 2007? The IMF report reminds us (as usual, footnotes and citations omitted): "The prevailing consensus before the crisis was that discretionary fiscal policy had a  limited role to play in fighting recessions. The focus of fiscal policy in advanced economies was often on the achievement of medium- to long-run goals such as raising national saving, external rebalancing, and maintaining long-run fiscal and debt sustainability given looming demographic spending pressures. For the management of business cycle fluctuations, monetary policy was seen as the central macroeconomic policy tool. Fiscal contraction was sometimes recommended during periods of economic overheating as a means of supporting monetary policy, for example to take pressure off the exchange rate in the face of persistent capital inflows. However, during downturns, it was deemed that there was little reason to use another instrument beyond monetary policy."

But when the Great Recession hit, this consensus wisdom went out the window in a hurry, not just in the U.S. economy but across the high-income countries of the world. Here's a figure comparing the usual rise in the debt/GDP ratio after a recession (the blue dashed line) with what has actually happened in advanced economies since the recession (the red line). The U.S. economy, with a rise in the debt/GDP ratio of just over 30 percentage points, is just about on the average of how high-income countries have expanded their government debt since the Great Recession. What lessons have we learned about fiscal policy during this period? Here are a few suggested by the IMF:

1) Of course, one main reason that so many governments raised their debt/GDP ratios so much was that the Great Recession was so ferocious. Advanced economies are apparently more vulnerable to severe downturns than most would have believed five years ago. In particular, financial imbalances, asset bubbles, housing and credit booms, and other risks were more severe that expected. . They write: "The fiscal risks created by large  (relative to GDP), growing, and interconnected financial sectors were also underappreciated, partly  because of confidence in financial markets’ capacity to self-regulate and the
opacity of cross-border exposures."

2) "[T]here is a need for a more holistic approach to measuring public debt and determining “safe’’ levels of debt." During the financial crisis, it became apparent that many governments were offering various guarantees and support to their financial sector that would not have been counted as "government debt" back in 2007, but turned into government debt very quickly when the crisis hit. "For example, in the United
States, potential contingent liabilities stemming from the debt of government-related enterprises is
estimated to exceed 50 percent of GDP ..." Official measurements of debt also don't take into account future promises for funding government programs, like providing support to the elderly.

3) In some "safe havens (Japan and the United States, for example), markets can tolerate much higher debt ratios than previously thought, at least for a time."

4) In other advanced economies, high government debt can lead to a  harmful "soverign debt feedback loop." Within a given country, banks typically hold a lot of debt from the government of that same country. If the government piles up so much debt that it begins to look risky, then the banks of that country have a lot of assets that look risky. But if the government is to step in and rescue the banks, it will pile up more debt, which will make the banks look even riskier. See the recent history of Greece for how this story unfolds.

5) "While debate continues, the evidence seems stronger than before the crisis that fiscal policy can, under today’s special circumstances, have powerful effects on the economy in the short run. In particular, there is even stronger evidence than before that fiscal multipliers are larger when monetary policy is constrained by the zero lower bound (ZLB) on nominal interest rates, the financial sector is weak, or the economy is in a slump ..Earlier research often assumed that the impact of fiscal policy was similar across different states of the economy, but a number of recent empirical studies suggest that fiscal multipliers may be larger during periods of slack. ...The crisis has not offered conclusive lessons regarding the relative size of revenue and
government spending multipliers. Some recent studies suggest that spending multipliers are larger than revenue multipliers, while others reach the opposite conclusion ... " 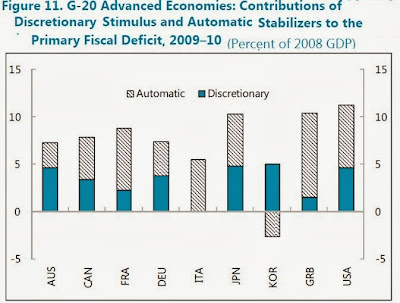 7) "The fundamental challenge facing policymakers today is to reduce deficits and debt levels in a way that ensures stability but is sufficiently supportive of short-term economic growth, employment, and equity. ...As mere promises to undertake fiscal adjustment later may not be persuasive, gradual consolidation needs to be anchored in a credible medium-term plan.