The German unemployment peaked at 12.1% in March 2005 (based on OECD statistics), and then declined more-or-less steadily since then, with only a small hiccup during the Great Recession. Here's a figure to illustrate from the ever-useful FRED website run by the Federal Reserve  Bank of St. Louis. How did Germany--the world's fourth-largest national economy--do it? Are there lessons to learn?

There are essentially three categories of explanation that have been suggested for Germany's remarkable labor market performance during the Great Recession: 1) decentralization of wage bargaining in Germany starting in the 1990s; 2) the "Hartz reforms" implemented in the mid-2000s; and 3) how the adoption of the euro influenced Germany's economic situation.

A nice statement of the first point of view, decentralization of German wage bargaining, appears in
"From Sick Man of Europe to Economic Superstar: Germany’s Resurgent Economy," by Christian Dustmann, Bernd Fitzenberger, Uta Schönberg, and Alexandra Spitz-Oener, in the Winter 2014 issue of the Journal of Economic Perspectives. (Full disclosure: I've been the Managing Editor of the JEP since 1987.) Dustman et al. start their story in the early 1990s. Germany was facing the enormous costs and disruptions of reunification, in which higher-wage West Germany found itself part of the same country with lower-wage East Germany. In addition, the fall of the Soviet Union also offered German firms access to imports produced by a number of lower-wage eastern European workers, many of who already had educational, economic, or cultural ties to Germany. Germany industry began a "factory Europe" approach which built international supply chains across countries of eastern Europe, as well as the rest of the world.

Under these pressures, German unions at the industry- and the firm-level showed considerable flexibility. The number of German workers covered by unions declined: "From 1995 to 2008, the share of employees covered by industry-wide agreements fell from 75 to 56 percent, while the share covered by firm-level agreements fell from 10.5 to 9 percent." Wages rose more slowly than productivity,a nd so starting around 1994, Germany's labor costs rose more slowly than those in other European countries, as well as the United State. In addition, Germany's wages became markedly more unequal. Here's a figure showing wage growth at the 85th percentile of wages, the 50th percentile, and the 15th percentile. 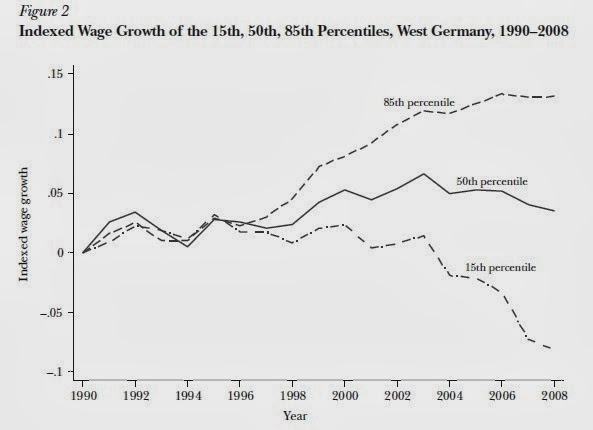 A second set of explanations for Germany's strong labor market performance in recent years emphasizes the "Hartz reforms" that were undertaken between 2003 and 2005. Ulf Rinne and Klaus F. Zimmermann offer a nice exposition of this point of view in "Is Germany the North Star of Labor Market Policy?" in the December 2013 issue of the IMF Economic Review. (This journal isn't freely available online, but readers may have access through library subscriptions.) They summarize the reforms this way:


"First, the reforms reorganized existing employment services and related policy measures. Importantly, unemployment benefit and social assistance schemes were restructured, and a means-tested flat-rate benefit replaced earnings-related, long-term unemployment assistance. Second, a significant reduction of long-term unemployment benefits—in terms of both amount and duration—and stricter monitoring activities were implemented to stimulate labor supply by providing the unemployed with more incentives to take up a job. Third, massive deregulation of fixed-term contracts, agency work, and marginal part-time work was undertaken to stimulate labor demand. The implementation of the reforms in these three areas was tied to an evaluation mandate that systematically analyzed the effectiveness and efficiency of the various measures of ALMP [active labor market policy]."

To put all this a little more bluntly, it was strong medicine. Early retirement options were phased out. Unemployment benefits were limited in eligibility, size, and duration. For example, the unemployed had to prove periodically that they were really looking for work. Also, remember that Germany was enacting many of these policies right around 2005 when its economy was going through a deep recession that spiked the unemployment rate.  During the recession, a number of German firms avoided layoffs by using the flexibility of the Hartz reforms to reduce hours worked--and wages paid.

The third set of explanations for Germany's lower unemployment rate focuses on the creation of the euro and the pattern of German trade surpluses that has resulted. The figure shows Germany's trade surplus. Notice that around 2001, when the euro moves into general use, Germany's trade surplus takes off. This has been called the "Chermany problem"--that is, both China and Germany after about 2000 had exchange rate that was at a low enough level to generate large and rising trade surpluses.

While academics and policymakers will continue to dispute the reasons for Germany's stellar performance in reducing unemployment in the last few years, I'll just note that none of the possible answers look easy. Having productivity growth outstrip wages over time, so that labor costs relative to competitors fall, isn't easy. Reorganizing industry around global supply chains that include suppliers from lower-wage economies isn't easy. Increasing inequality of wages isn't easy. The "structural labor market reforms" that include trimming back on  early retirement and unemployment insurance isn't easy. U.S. discussions of economic policy sometimes make it sound as if the government can just "create jobs" with large enough spending and/or tax cuts, or low enough interest rates. But real and lasting solutions to reducing unemployment and keeping it low aren't that easy.
Posted by Timothy Taylor at 7:00 AM