Will We Look Back on the Euro as a Mistake?

For the last few months, the euro situation has not been a crisis that dominates headlines. But the economic situation surrounding the euro remains grim and unresolved. Finance and Development, published by the IMF, offers four angles on Europe's road in its March 2014 issue. For example,
Reza Moghadam discusses how Europe has moved toward greater integration over time, Nicolas Véron looks at plans and prospects for a European banking union, and Helge Berger and Martin Schindler
consider the policy agenda for reducing unemployment and spurring growth.  But I was especially drawn to "Whither the Euro?" by Kevin Hjortshøj O’Rourke, because he finds himself driven to contemplating whether the euro will survive. He concludes:

The demise of the euro would be a major crisis, no doubt about it. We shouldn’t wish for it. But if a crisis is inevitable then it is best to get on with it, while centrists and Europhiles are still in charge. Whichever way we jump, we have to do so democratically, and there is no sense in waiting forever. If the euro is eventually abandoned, my prediction is that historians 50 years from now will wonder how it ever came to be introduced in the first place.

To understand where O'Rourke is coming from, start with some basic statistics on unemployment and growth in the euro-zone. Here's the path of unemployment in Europe through the end of 2013, with the average for all 28 countries of the European Union shown by the black line, and the average for the 17 countries using the euro shown by the blue line. Here's the quarterly growth rate of GDP for the 17 euro countries, for all 28 countries in the European Union, and with the U.S. economy for comparison. Notice that the European Union and the euro zone actually had two recessions: the Great Recession that was deeper than the U.S. recession, and the a follow-up period of negative growth from early 2011 to early 2013. As O'Rourke writes: "In December 2013 euro area GDP was still 3 percent lower than in the first quarter of 2008, in stark contrast with the United States, where GDP was 6 percent higher. GDP was 8 percent below its precrisis level in Ireland, 9 percent below in Italy, and 12 percent below in Greece." 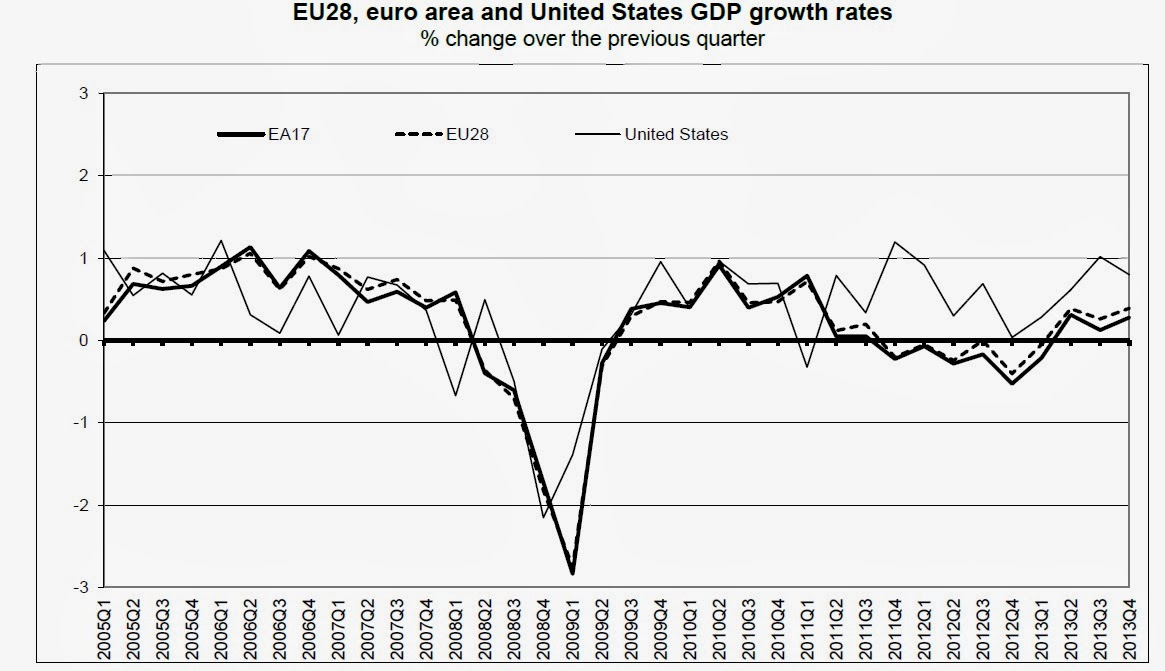 For American readers, try to imagine what the U.S. political climate would be like if unemployment had been rising almost continually for the last five years, and if the rate was well into double-digits for the country as a whole. Or contemplate what the U.S. political climate would look like if instead of sluggish recovery, U.S. economic growth had actually been in reverse for most of 2011 and 2012.

O'Rourke points out that this dire outcome was actually a predictable and predicted result based on standard economic theory before the euro was  put in  place. And he points out that there is no particular reason to think that the EU is on the brink of addressing the underlying issues.

The relevant economic theory here points out that if two areas experience different patterns of productivity or growth, some adjustment will be necessary between them. One possibility, for exmaple, is that the exchange rate adjusts between the two countries. But if the countries have agreed to use a common currency, so that an exchange rate adjustment is impossible, then other adjustments are possible. For example, some workers might move from the lower-wage to the higher-wage area. Instead of a shift in exchange rates cutting the wages and prices in global markets, wages and prices themselves could fall in an "internal devaluation." A central government might redistribute some income from the higher-income to the lower-income area.

But in the euro-zone, these adjustments are either not-yet-practical or impossible. With the euro as a common currency, exchange rate changes are out. Movement of workers across national borders is not that large, which is why unemployment can be 5% in Germany and more than 25% in Spain and Greece. Wages are often "sticky downward," as economists say, meaning that it is unusual for wages to decline substantially  in nominal terms. The EU central government has a relatively small budget and no mandate to redistribute from higher-income to lower-income areas. Without any adjustment, the outcome is that certain countries have depressed economies with high unemployment and slow or negative growth, and no near-term way out.

Sure, one can propose various steps that in time might work. But for all such proposals, O'Rourke lays two unpleasantly real facts on the table.


First, crisis management since 2010 has been shockingly poor, which raises the question of whether it is sensible for any country, especially a small one, to place itself at the mercy of decision makers in Brussels, Frankfurt, or Berlin. ... Second, it is becoming increasingly clear that a meaningful banking union, let alone a fiscal union or a safe euro area asset, is not coming anytime soon.

Given the unemployment and growth situations in the depressed areas of Europe, it's no surprise that pressure for more extreme political choices is building up. For Europe, sitting in one place while certain nations experience depression-level unemployment for years while other nations experience booms, and waiting for the political pressure for extreme change to become irresistible,  is not a sensible policy. O'Rourke summarizes in this way:

For years economists have argued that Europe must make up its mind: move in a more federal direction, as seems required by the logic of a single currency, or move backward? It is now 2014: at what stage do we conclude that Europe has indeed made up its mind, and that a deeper union is off the table? The longer this crisis continues, the greater the anti-European political backlash will be, and understandably so: waiting will not help the federalists. We should give the new German government a few months to surprise us all, and when it doesn’t, draw the logical conclusion. With forward movement excluded, retreat from the EMU may become both inevitable and desirable.