The Census data most often used for studying the distribution of income is a snapshot of income each year. With this data, you can see how many people are in the top and bottom income groups, and all the groups in between, but you can't tell whether the same people are in the top or the bottom groups. In other words, the usual data on inequality doesn't allow you to look at the mobility of people across the income distribution. The degree of income mobility might matter a great deal to how one thinks about income inequality. For example, if those in the top or bottom groups are often there for a relatively short period of time, or if those from one generation of a family have a better chance over time of ending up in a different part of the income distribution than the previous generation of that family, one might feel differently about the rise in income inequality over the previous few decades.

There has been some evidence on mobility across the income distribution over the last few decades, often using the Panel Study of Income Dynamics,  a dataset that started tracking a nationally representative sample of 5,000 families back in 1968, and has been looking at them year-by-year, along with their descendants and the families of their descendants, since then. Raj Chetty, Nathaniel Hendren, Patrick Kline, Emmanuel Saez, and Nicholas Turner take a whack at this this issue focusing on intergenerational income mobility in "Is the United States Still a Land of Opportunity? Recent Trends in Intergenerational Mobility?" The January 2014 paper, along with data and supporting materials, is available here.

Their bottom line is that the amount of intergenerational income mobility isn't changing over time. They look at intergenerational income mobility with a variety of calculations, but here's one illustrative figure: "This figure plots the difference in average income percentiles for children born to low vs. high-income parents in each year from 1971-1993. On average, children from the poorest families grow up to be 30 percentiles lower in the income distribution than children from the richest families, a gap that has been stable over time. For children born after 1986, estimates are predictions based on college attendance rates."

Summarizing work in this area, they write: "Putting together our results with evidence from Hertz (2007) and Lee and Solon (2009) that intergenerational mobility did not change significantly between the 1950 and 1970 birth cohorts, we conclude that rank-based measures of social mobility have remained stable over the second half of the twentieth century in the United States. However, intergenerational mobility is significantly lower in the U.S. than in most other developed countries, especially in some parts of the country such as the Southeast and cities in the Rust Belt."

To be clear, saying that intergenerational mobility of incomes hasn't changed is quite different from arguing that the distribution of income hasn't changed.  As they point out, a lot of the change in the distribution of income--a greater share of income going to the extreme upper end--doesn't seem to have much effect on the rate of intergenerational mobility across different parts of the income distribution: "However, much of the increase in inequality has come from the extreme upper tail (e.g., the top 1%) in recent decades, and top 1% income shares are not strongly associated with mobility across countries or across metro areas within the U.S."

Indeed, given that the distribution of income has been widening out, it is actually a little surprising that intergenerational mobility has been fairly stable: after all, if the levels of income distribution are farther apart, moving between those levels would seem to be  harder. The authors use a ladder diagram to illustrate this theme: 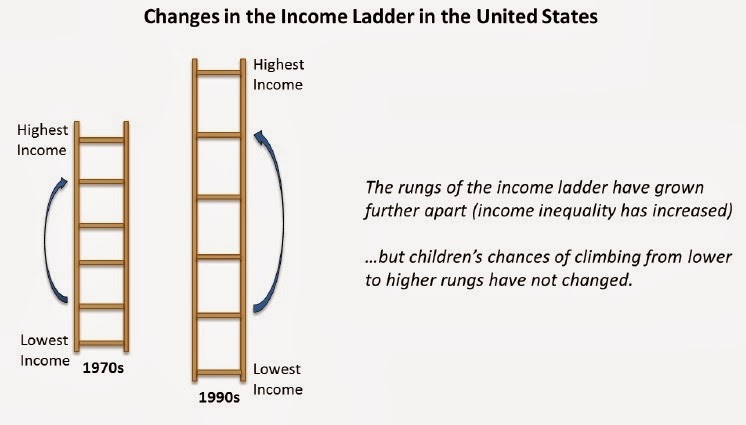 But to put this same point another way, winning the "birth lottery" now has a bigger effect than it did a few decades ago, because stable intergenerational mobility is not offsetting the rising inequality of the income distribution. Of course,  the "American Dream," that term coined by Pulitzer Prize-winning historian named James Truslow Adams back in 1931, defines the powerful value in America people should have equal opportunity to follow their dreams--in both material income-earning and nonmaterial terms--rather than living in a society calcified by income and class distinctions.

Two points about this research finding are worth emphasizing. First, these authors are a very high-profile and high-powered group, and some of them (Saez in particular) have been strongly associated with arguments about the rising share of income at the top of the income distribution and the desirability of higher marginal tax rates. In other words, this is not a finding that can be dismissed as propaganda from low-level right-wing economists. Second, calculating intergenerational income mobility is a data hard problem. This group has a fairly remarkable dataset, and has made a fairly remarkable effort, but there are sure to be future studies that offer additional subtleties or even contrary findings.

In the details, their result is actually based on four interlocking sets of calculations. As they write: "For children born during or after 1980, we construct a linked parent-child sample using population tax records spanning 1996-2012. This population-based sample consists of all individuals born between 1980-1993 who are U.S. citizens as of 2013 and are claimed as a dependent on a tax return filed in or after 1996. We link approximately 95% of children in each birth cohort to parents based on dependent claiming, obtaining a sample with 3.7 million children per cohort."

But the first graph shows data back to 1971. How were they included? Again, they used tax data, but in this case they needed to used samples of that data. "We first identify all children between the ages of 12 and 16 claimed as dependents in the 1987-98 SOI [Statistics of Income, the official tax data] cross-sections. We then pool all the SOI cross-sections that give us information for a given birth cohort. For example, the 1971 cohort is comprised of children claimed at age 16 in 1987, while the 1982 cohort is comprised of children claimed at ages 12-16 in 1994-98. The SOI sample grows from 4,331 children in 1971 to 9,936 children in 1982.

But there's another problem: their standard measure of mobility across the income distribution is to look at children's income at age 30, and then compare it to their parent's income. But as they write: "We cannot measure children’s income at age 30 beyond the 1982 birth cohort because our data end in 2012." You'll notice that in the figure above, the line includes those born into the early 1990s. For those born from 1983-1986, they look at earnings as of age 26, which they argue are pretty close correlated with earnings at age 30. Then for those born from 1987-1993, they project future income based on rates of college attendance.

In other words, the seemingly simple graph above, along with their other calculations, is based on samples of thousands of children from tax data for 1971-1980. They have tax-based data on 3.7 million children from 1980 to 1993, but they only have income up to age 30 for the first couple of years, then income up to age 26 for another few years, and then projections based on college attendance after that.

Thus, while this study and a several previous studies suggests that intergenerational mobility of incomes hasn't shifted much over time, the issue is certain to be revisited as new evidence emerges over time.