U.S. higher education has been seeing three main changes in staffing patterns in the last decade or so: 1) part-time faculty are way up; 2) administrators are way up; 3) and staff are down. In the middle of all this, the number and pay of full-time tenure track faculty hasn't changed much. Donna M. Desrochers and Rita Kirshstein describe the patters in  "Labor Intensive or  Labor Expensive? Changing Staffing and Compensation Patterns in Higher Education," as a Februrary 2014 "Issue Brief" for the Delta Cost Project at the American Institutes of Research. The analysis is based on a dataset maintained by the National Center for Education Statistics. Here is some of the evidence that caught my eye. 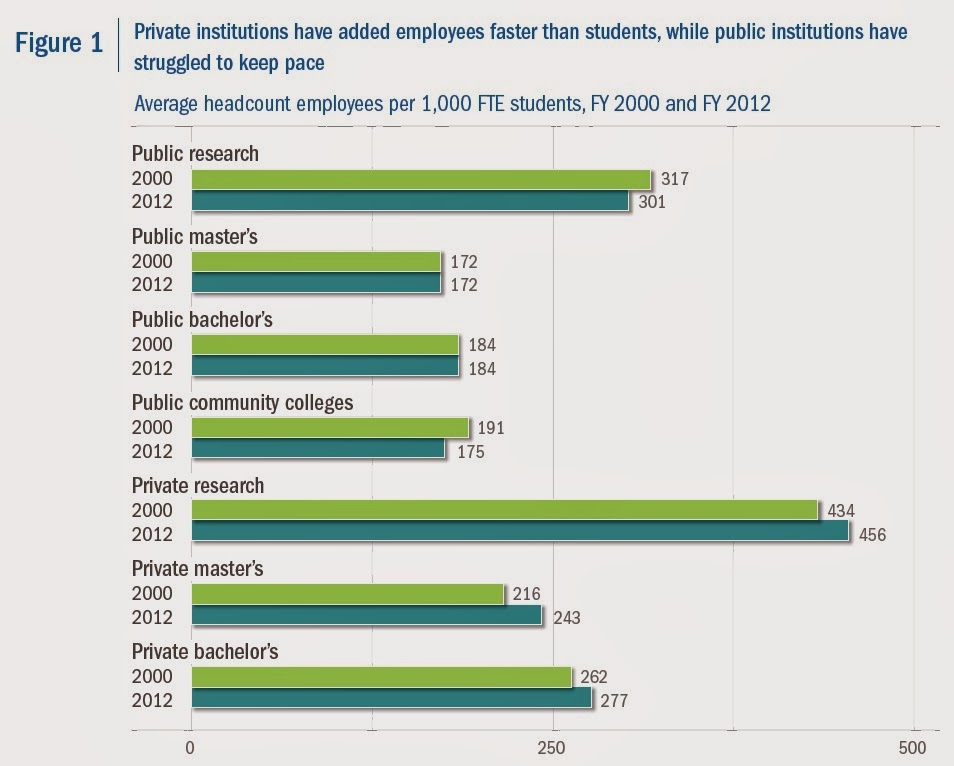 But within these overall employee numbers, a shift is occurring. This figure shows changes in different categories of employees over time just for research universities, again expressed per 1,000 full-time equivalent students. 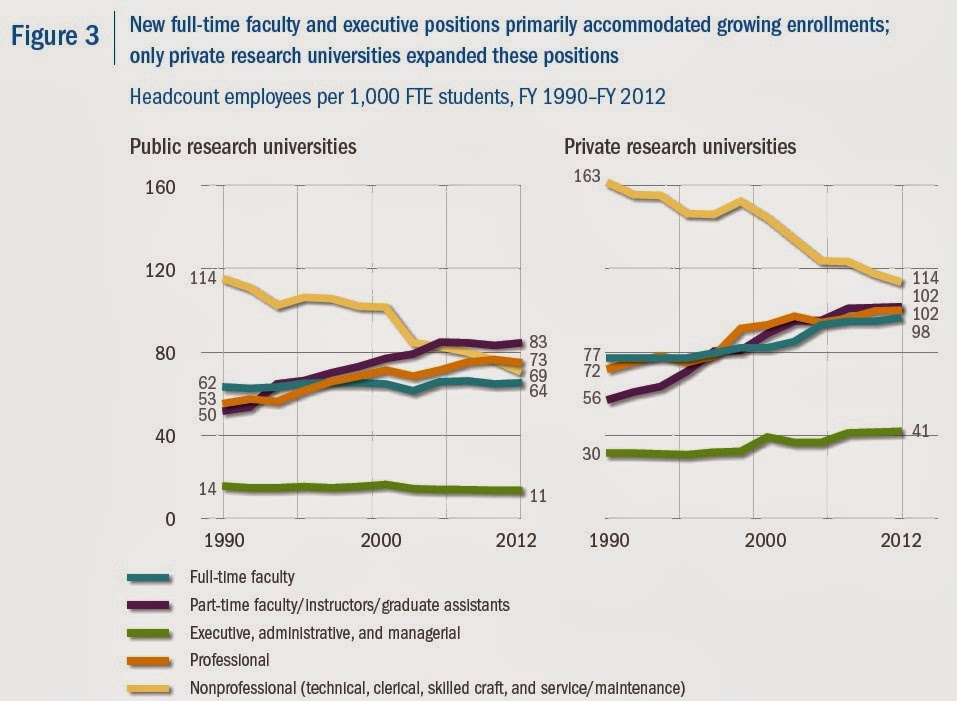 Overall, full time faculty are about 20-25% of the employees in higher education, with the number being a little lower in research-oriented institutions and higher in teaching-oriented institution. The number of faculty relative to the number of students (the blue line) has barely budged in the public research universities, and has risen in the private ones.  But even among full-time faculty, the share with a time-limited contract instead of a conventional tenure arrangement is declining: "Among full-time faculty only, the share of non-tenure-track professors increased about 3 percentage points between 2004 and 2012. By 2012, these non-tenure track positions represented more than one third of assistant professors, 18 percent of associate professors, and 12 percent of full professors ..." 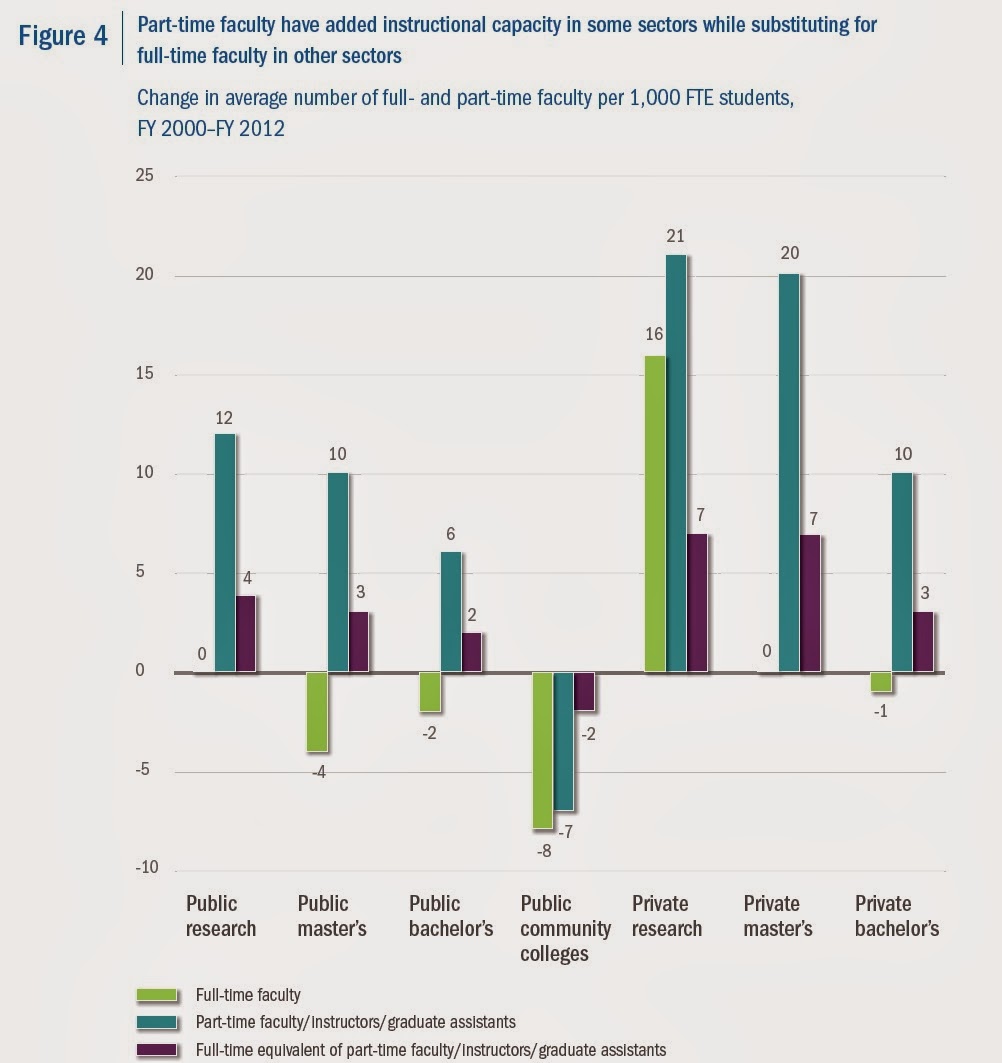 In both types of research universities, the number of "nonprofessional" staff--technical, clerical, service/maintenance--has fallen relative to the number of students. This group is about one-quarter of the employees at higher education institutions. What has actually happened here is the total number of these employees hasn't changed much, but they are serving a larger number of students over time--probably due in part to the information technology revolution.

The picture that emerges from all this is fairly clear. When it comes to employment, colleges and universities have tried to hold down faculty costs in dealing with the expanding numbers of students by the use of time-contract faculty and part-timers. The nonprofessional staff are dealing with the increased number of students by using improved information technology and other capital investments, without a need for  a higher total number of staff. But the number of professional staff is rising, both in absolute terms and relative to the number of students. Desrochers and Kirshstein report these patterns in a neutral tone: "Growing numbers of administrative positions (executive and professional) and
changes in faculty composition represent long-standing trends. The shifting balance among these positions has played out steadily over time in favor of administrators, and it is unclear when a tipping point may be near. Whether this administrative growth constitutes unnecessary “bloat” or is justified as part of the complexities involved in running a modern-day university remains up for debate."

I'll only add that institutions are defined by their people. As the full-time and tenured faculty become a smaller share of the employees of the institution and the professional administrators become a larger share, the nature and character of the institution inevitably changes. In this case, colleges and universities have become less about faculty, teaching, and research, and more about the provision of professional services to students and faculty. As far as I know, this shift was not planned or chosen, and the costs and benefits of such a shift were not analyzed in advance. It just happened.