From BRICs to MINTs?

Back in 2001, Jim O'Neill--then chief economist at Goldman Sachs--invented the terminology of BRICs. As we all know two decades later, this shorthand is a quick way of discussing the argument that the course of the world economy will be shaped by the performance of Brazil, Russia, India, and china. Well, O'Neill is back with a new acronym, the MINTs, which stands for Mexico, Indonesia, Nigeria, and Turkey. In an interview with the New Statesman, O'Neill offers some thoughts about the new acronym. If you would like more detail on his views of these countries, O'Neill has also recorded a set of four radio shows for the BBC on Mexico, Indonesia, Nigeria, and Turkey.

In the interview, O'Neill is disarmingly quick to acknowledge the arbitrariness of these kinds of groupings. About the BRICs, for example, he says: "If I dreamt it up again today, I’d probably just call it ‘C’ ... China’s one and a half times bigger than the rest of them put together.” Or about the MINTs, apparently his original plan was to include South Korea, but the BBC persuaded him to include Nigeria instead. O'Neill says: “It’s slightly embarrassing but also amusing that I kind of get acronyms decided for me.” But even arbitrary divisions can still be useful and revealing. In that spirit, here are some basic statistics on GDP and per capita GDP for the BRICs and the MINTs in 2012. 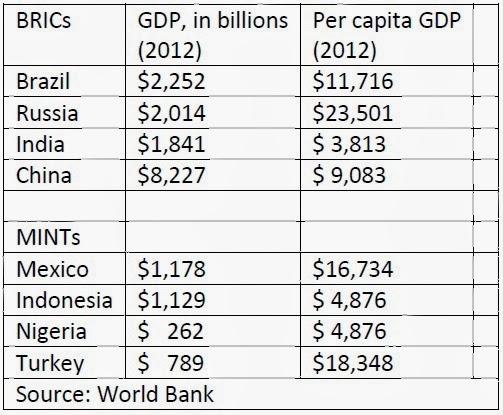 What patterns jump out here?

1) The representative growth economy for Latin America is now Mexico, rather than Brazil. This change makes some sense. Brazil has had four years of sub-par growth, its economy is in recession, and international capital is fleeing. Meanwhile, Mexico is forming an economic alliance with the three other nations with the fastest growth, lowest inflation, and best climates for business in Latin America: Chile, Columbia and Peru.

2) All of the MINTs have smaller economies than all of the BRICs. If O'Neill would today just refer to C, for China, rather than the BRICs as a group, it's still likely to be true that C for China is the key factor shaping the growth of emerging markets in the future.

3) O'Neill argues that although the MINTs differ in many ways, their populations are both large and relatively young, which should help to boost growth. He says: "That’s key. If you’ve got good demographics that makes things easy." Easy may be overstating it! But there is a well-established theory of the "demographic dividend," in which countries with a larger proportion of young workers are well-positioned for economic growth, as opposed to countries with a growing proportion of older workers and retirees.

4) One way to think about the MINTs is that they are standing as representatives for certain regions. Thus, Mexico, although half the size of Brazil's economy, represents the future for Latin America. Indonesia, although smaller than India's economy and much smaller than China's, represents the growth potential for Factory Asia--that group of countries building international supply chains across this region. Turkey represents the potential for growth in Factory Europe--the economic connections happening around the periphery of Europe. Nigeria's economy looks especially small on this list, but estimates for Nigeria are likely to be revised sharply upward in the near future, because the Nigerian government statistical agencyis “re-basing” the GDP calculations so that they represent the structure of Nigeria’s economy in 2014, rather than the previous “base” year of 1990. Even with this rebasing, Nigeria will remain the smallest economy on this list, but it is expected to become the largest economy in sub-Saharan Africa (surpassing South Africa). Thus, Nigeria represent the possibility that at long last, economic growth may be finding a foothold in Africa.

I'm not especially confident that MINTs will catch on, at least not in the same way that BRICs did. But of the BRICs, Brazil, Russia, and to some extent India have not performed to expectations in the last few years. It's time for me to broaden the number of salient examples of emerging markets that I tote around in my head. In that spirit, the MINTs deserve attention.