I'm usually opposed to book-burning, but I've recently discovered that Haverford College, where I graduated in 1982, used to have a tradition of book-burning that seems to me admirable and even enviable. It worked like this: Back in the 1880s, the sophomore class was responsible for choosing their least favorite book. They then planned an elaborate ceremony--marches, costumes, songs--to be held near the end of the academic year. A common highlight of the ceremony was that the worst book was put on trial, with arguments for and against, and when the inevitable conviction was announced, a copy of the book was burned at the stake. Of course, the fact that a book was convicted and executed one year didn't mean that students were able to avoid reading it the next year.

Some details are available at at a website run by the Quaker and Special Collections part of the Haverford Library. Here's one of the invitations to the event (the pointing fingers are added to the image by the librarians, and at the website they link to comments and translations): 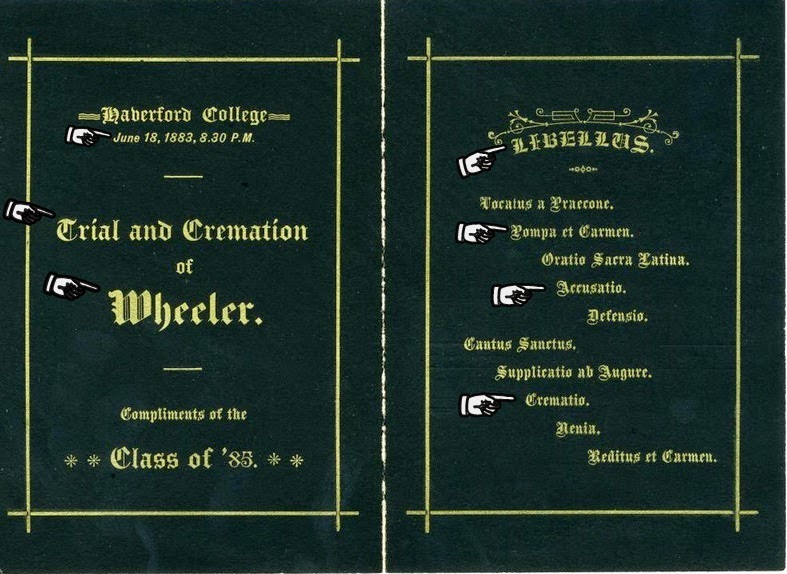 Here's a picture of students dressing in costume for the event. 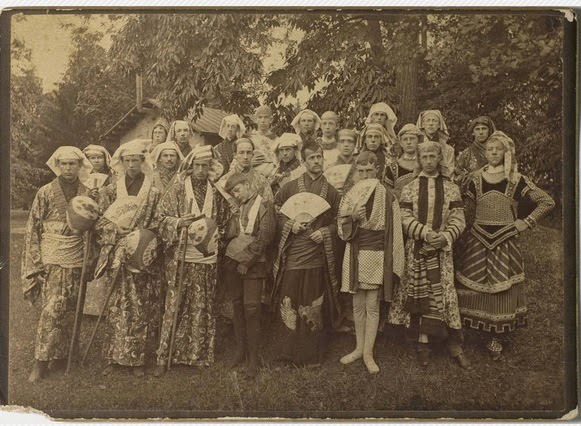 I should admit that this type of costumed ritual, whether it involves book-burning or not, is a transcontinental distance from my personality type. But what I do like about this particular book-burning ritual, of course, is that it is rooted in an intimate and detailed connection with the text--as well as with the demerits of other texts not ultimately worthy of cremation. My guess is that the curriculum for sophomores offered a lot less choice 150 years ago, and so a high proportion of students would all read the same books. Apparently, such book-burning rituals also occurred at other schools at around this time, including Penn, Princeton, Yale, and Rutgers.

The ritural reminds me of a a story I once heard from a an acquaintance once that after completing his Ph.D. dissertation, he saved one copy for a special purpose: he executed each separate page in a distinctive manner, through numerous variations on crumpling, burning, drowning, tearing. He limited himself to executing one page per day, so that he could prolong the experience.

Hat tip: I heard about this book-burning practice through the Twitter feed David Wessel ‏@davidmwessel 49m. David is now Director of the Hutchins Center on Fiscal & Monetary Policy at the Brookings institution, and before that was at the Wall Street Journal for a number of years. But he also preceded me as a Haverford alum, in his case with the class of 1975.