We know that a large proportion of job growth and economic dynamism comes from those young firms and small firms that are in the process of taking off. But how does the role of small firms vary across countries, and during the recent Great Recession? Chiara Criscuolo, Peter N. Gal, and Carlo Menon have put together the evidence in "The Dynamics of Employment Growth: New Evidence from 18 Countries," published as OECD Science, Technology and Industry Policy Papers No. 14 (May 21, 2014).  The same authors also offer a readable short summary of some of the main themes of the report in "DynEmp: New cross-country evidence on the role of young firms in job creation, growth, and innovation" at the Vox website.

As an overall starting point, it's useful to recognize that most firms in high-income economies are small, but by definition, these firms hire relatively few workers, and so most employment happens in medium and large firms. Here's the data from Criscuolo, Gal, and Menon: 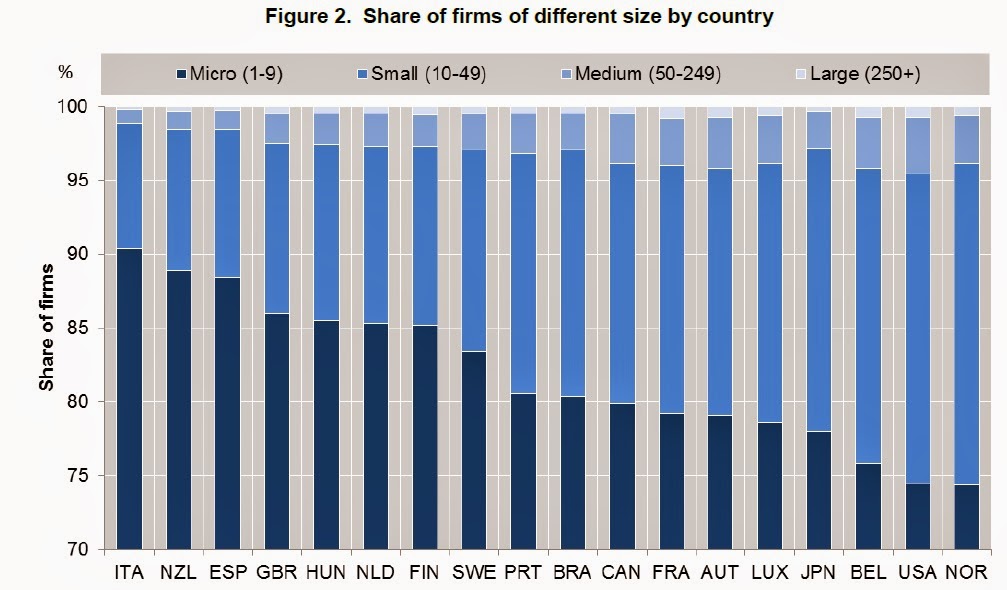 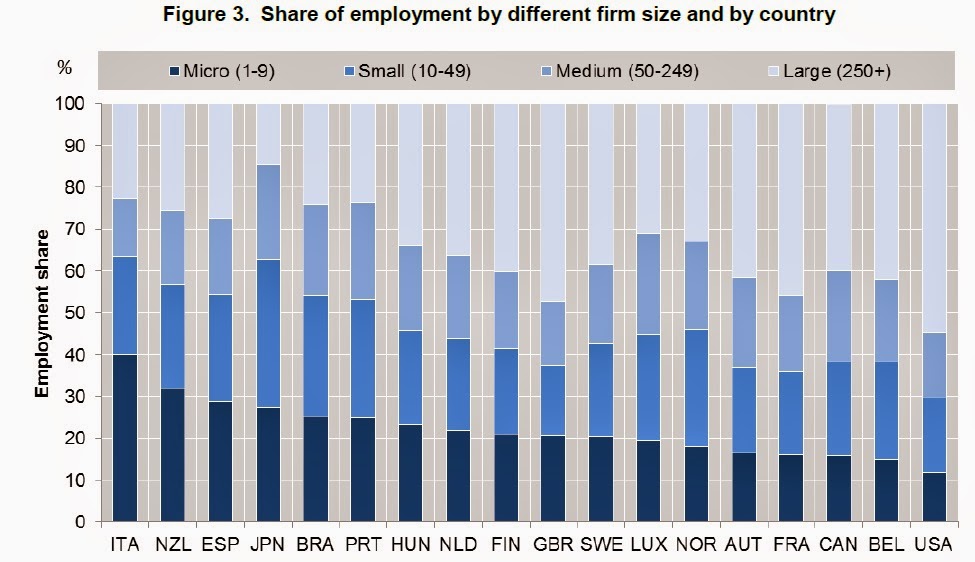 Moreover, the evidence from Criscuolo, Gal, and Menon suggests that while sizes of start-ups are fairly similar across countries, the size of older firms differs quite a bit.  The dark blue bars on the figures show the size of start-ups in terms of employees, while the light blue squares show the average size of firms across countries: top panel is manufacturing, bottom panel is services. 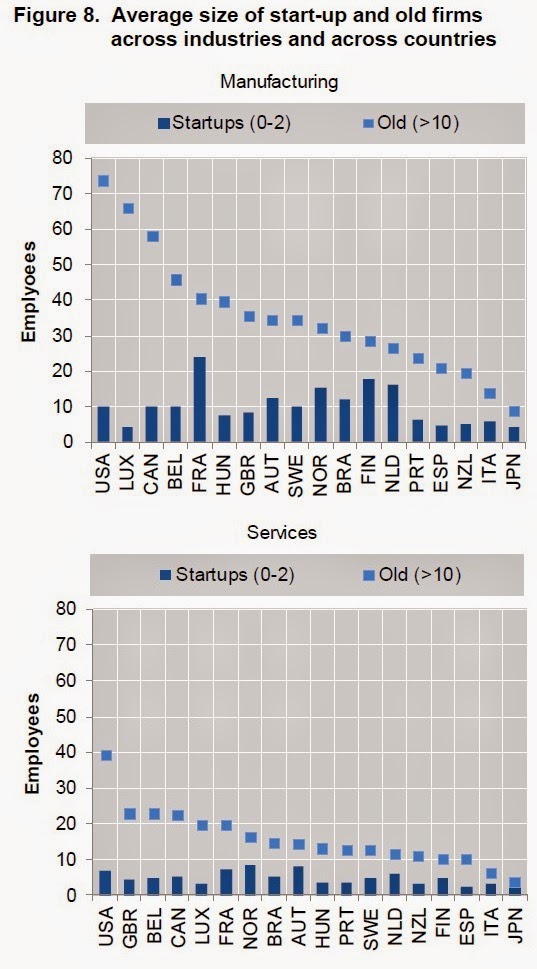 The authors warn that the size of start-ups as measured by employees may not be fully comparable across countries, because in some cases a newly merged firm is apparently counted as a start-up. But that said, the evidence is intriguing because it suggests that the U.S. economy is not especially extraordinary in having larger start-up firms, but it is different in having a friendlier business climate that is more likely to allow some start-ups to grow into larger firms. They write:

As indicated in the figure, differences in the size of start-ups at entry exist but
are not striking ... The average size of old firms in the United States – around 80 employees in manufacturing and 40 in services – is by far the largest in the sample. These statistics are even more striking since in some other economies, the average start-ups tend to be larger than in the United States, for example the average size of start-ups in the French manufacturing sector is more than double the average size of United States start-ups, while the situation reverses when considering older businesses: on average the size for an old manufacturing business in France is half the size than in the United States. This evidence confirms previous results of Bartelsman et al. (2005) on employment growth amongst surviving firms in the manufacturing sector of six
European countries (France, Finland, West Germany, Portugal, Italy and the United Kingdom) and the United States showing that at the age of seven, US firms are on average 60% larger than their size at entry, while in European countries the figure ranges between 5% and 35%. This suggests that in some countries there are lower entry barriers for new firms; as a consequence, entrants can start off at a smaller size as they have more room for experimentation. This, in turn, might contribute to unleashing the growth prospects of very productive and successful businesses. Also it indicates that in some countries barriers to growth (access to market; burdensome regulation on starting businesses; lack of competition; etc.) might hinder the growth potential of young businesses.

The evidence also suggest that the start-up rate for small businesses (defined as the fraction of all firms that are start-ups) has been declining, a fact which was known for the U.S. but at least I had not know about for other countries. Perhaps not surprisingly, because young firms and small firms can be fragile, the trend toward lower start-up rates worsened during the Great Recession. 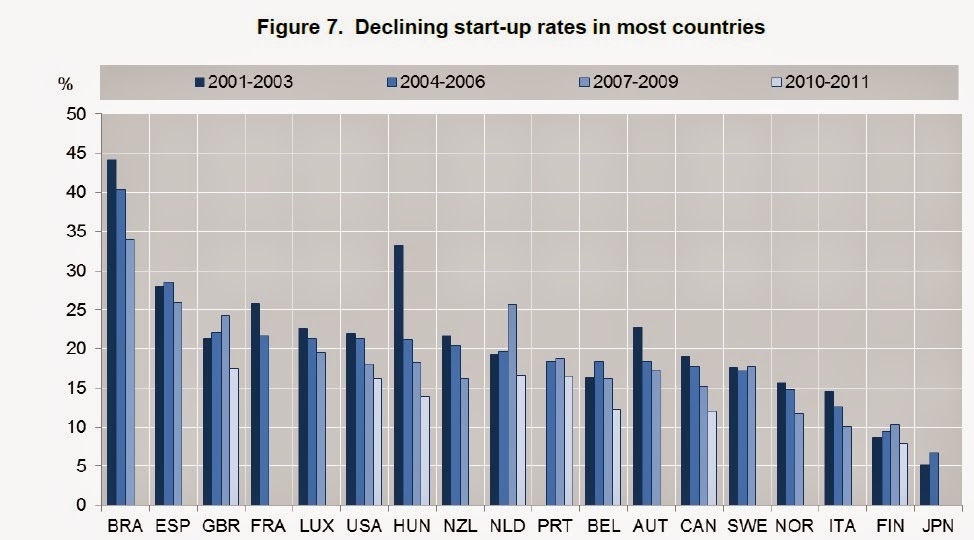 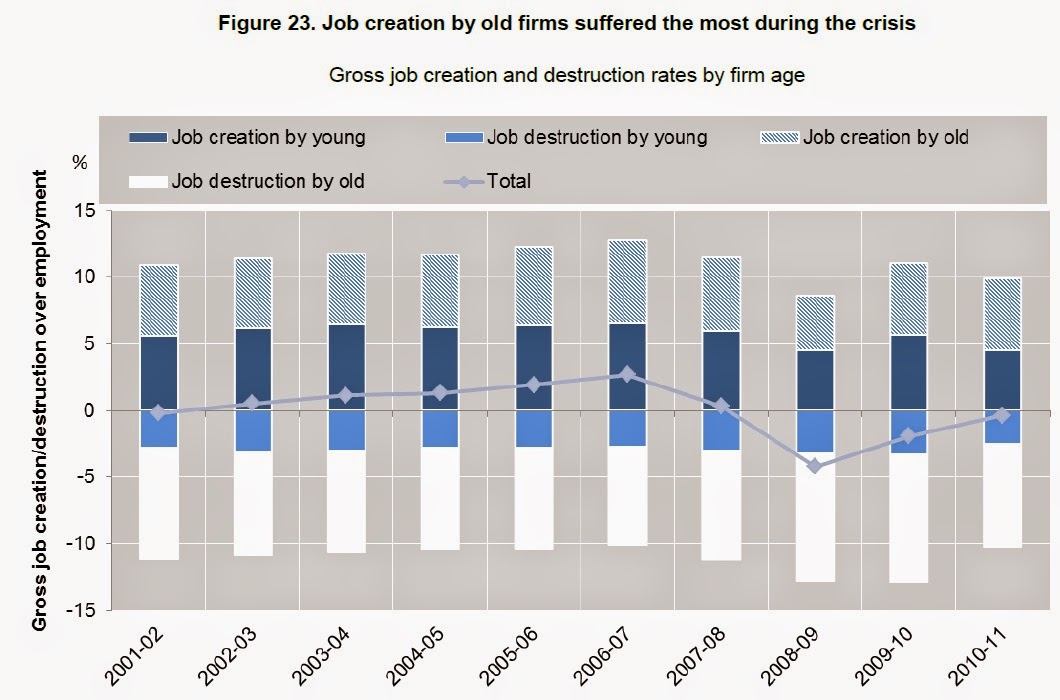 You can eyeball this figure in a bunch of ways, but I found it useful to notice that job creation at young firms exceeds job destruction at young firms, while for older firms the reverse is true. You can also see that even during the Great Recession, when job growth turned negative, small firms on net were creating more jobs than they destroyed.

The authors note with appropriate caution that how this cross-country evidence is preliminary and there can be issues in how official statistics on firm age, entry and exit, are collected across countries--and thus the extent to which they are truly comparable. That said, the available evidence to me makes a powerful statement that it's not the share of small firms in an economy that matters, nor the number of employees working at small firms, nor the size of start-ups firms, nor the rate of start-up firms. What matters most is whether the economy provides an environment in which a relatively small share of start-ups will be able to take off in size and become larger firms.