The Challenge of Participation in the Globalizing Economy

One of the biggest economic adaptations for high-income economies in a globalizing world is the recognition that the lion's share of economic growth in the next few decades will be happening outside their borders in "emerging" economies. The U.S. economy, with its enormous domestic market, has been somewhat insulated from world markets in the past, and European companies have often focused more on building ties across the internal market of the EU. Such a strategy made sense back around 1980, or perhaps even 1990. It won't make sense in the next few decades. A team at the McKinsey Global Institute--James Manyika, Jacques Bughin, Susan Lund, Olivia Nottebohm, David Poulter, Sebastian Jauch, and Sree Ramaswamy--sketches how the world economy is evolving in an April 2014 report, "Global flows in a digital  age: How trade, finance, people, and data connect the world economy." They write (footnotes omitted):

"Yet the fact remains that even the world’s largest multinational companies remain underweight in emerging markets. In 2010, McKinsey research found that 100 of the world’s largest companies headquartered in developed economies derived just 17 percent of their total revenue from emerging markets—despite the fact that those markets accounted for 36 percent of global GDP and are likely to contribute more than 70 percent of global GDP growth between now and 2025. Business leaders need to not only invest more in emerging markets but also understand how the role of these countries in the world economy is undergoing a historic transformation. In the first wave of globalization, developing countries first supplied commodities and raw materials for production and then economies recently became an abundant source of cheap labor for global supply chains. In the current wave of globalization, the emerging world is increasingly becoming a source of new customers. But a third wave is coming, enabled by digital technologies. In the new era, emerging economies will increasingly be the source of new talent pools, innovations, competition, and partnerships. Companies need to look globally for the right talent, suppliers, and innovation—and much of those could be in emerging markets."

Large companies based in emerging economies are already changing the shape of global competition.

[L]arge companies from emerging markets are increasingly formidable global players. For instance, Bharti Airtel, the largest telecommunications company in India, has more than 260 million mobile customers around the world, more than the combined population of Germany, Japan, and Spain. Lenovo is the largest PC seller in the world. Mumbai’s Tata Sons is now the largest private-sector employer in the United Kingdom with more than 40,000 workers across Tata Steel, Jaguar Land Rover, Tata Consultancy Services, and TGB, a drinks branch that acquired British tea company Tetley. Two Mexican companies—Cemex and Bimbo—are the US market leaders for cement and bread, respectively.

For a deeper sense of these changes, contemplate how quickly economic growth is moving in some of the converging economies. This figure shows the amount of time that it took various economies to double their per capita GDP from about $1300 to $2600. In the UK, this process took 150 years from about 1700 to the mid-1800s. In the U.S. and Germany, it happened in a little more than half-century in the middle of the 1800s. It took Japan 33 years in the early 1900s. Not only has that process been much faster in China and India, but look at the size of the populations involved. When the US started its process of doubling per capita GDP between these two levels in about 1820, the U.S. population was about 10 million. When China and India started the same step, their populations were close to 1 billion people each. Buying power is shifting to the emerging markets of the world. 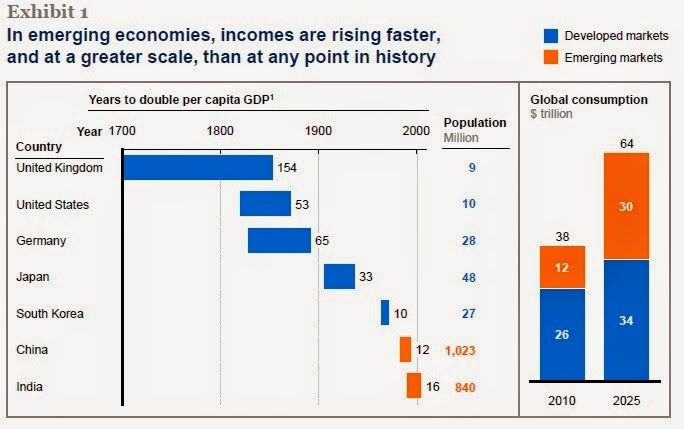 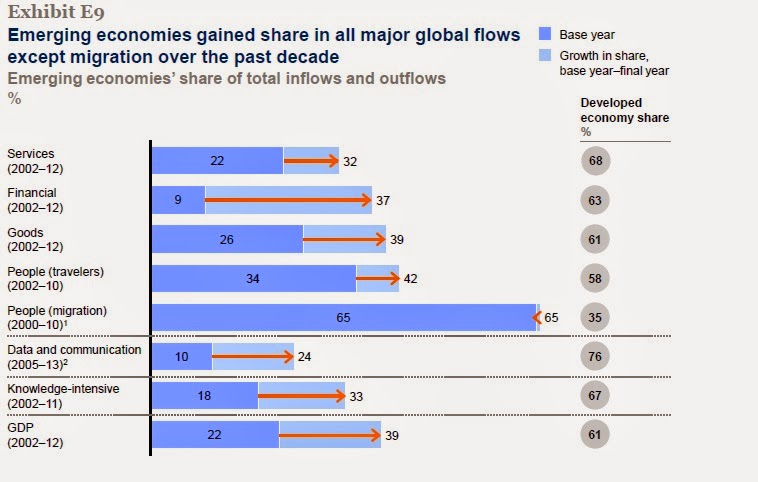 Sometimes it's the more specific facts that help drive home some of the changes around us. For example, the McKinsey team reports that "China is already a larger market for BMW than the
United States." Computer-to-computer Skype calls barely existed a decade ago; now, they are almost 40% of the volume of traditional international phone calls. "Netflix, which provides movies and television shows online, has become an increasingly international business. By 2013, nearly one-quarter of its streaming customers lived outside the United States, a testament to the speed at which companies can establish a global footprint courtesy of digital technologies. Some 40 percent of
Amazon’s revenue in 2013 came from sales outside of North America."

The United States and other high-income countries are competing for what roles they will play in the globalizing economy, and thus how they can experience domestic economic benefits from the rapid growth of emerging economies around the world. But except for what sounds mostly like 20th-century talk about trade agreements and big-company export sales, the discussion of how to reorient high-income economies around these global realities seems to me barely underway.