There has been enormous attention paid, and rightly so, to how slowly U.S. labor markets have rebounded since the Great Recession. But the sluggish rebound of U.S. business investment deserves attention, too. Here is the pattern of private nonresidential fixed investment in the U.S. divided by GDP, created with the help of the ever-useful FRED website. During the worst of the Great Recession, investment fell to levels comparable to troughs of recessions in the 1970s and the early 1990s. But even with some bounce-back since 2009, the level of U.S. investment remains low by historical levels.

This low level of investment is showing up in a number of recent discussions. For example, Robert Hall recently calculated that the U.S. GDP is now 13% below where it would be if it had remained on the average trend path fro 1990-2007. He attributes 3.9 percentage points of that gap to a shortfall in business capital. Lawrence Summers gave a recent speech about "U.S. Economic Prospects: Secular Stagnation, Hysteresis, and the Zero Lower Bound." The secular stagnation argument, dating back to a 1938 paper by Alvin Hansen, makes the claim that a strong level of investment is needed for a full-employment economy. Hansen argues that historically, high levels of investment have been driven by three factors: 1) innovation and new technology; 2) a rising  population; and 3) the discovery of new territory and resources.  He argued in 1938 that the last two causes were looking unlikely, and so the U.S. economy needed to focus on innovation and new technology.

As Summers points out, the last two U.S. economic upswings--the dot-com boom of the 1990s and the housing boom of the mid-2000s--were driven by rising investment levels. Of course, the busts that followed these booms were not created equal. The dot-com boom led to high levels of investment in information and communications technology that has paid off in productivity gains, and was followed by a drop in stock prices and the relatively brief and shallow recession in 2001. The financial losses around 2001 were concentrated in stock prices. The housing boom led to more houses, which will not have an effect of boosting future productivity, and was followed by a financial crises and Great Recession that shook the U.S. economy to its roots. Thus, the challenge is not just to have more investment, but to have it in a way that improves productivity and doesn't set the stage for a financial earthquake.

The very slow rebound in investment isn't obvious to explain.

One possible explanation is a rise in economic uncertainty, as U.S. firms and consumers try to process what hit them during the Great Recession and how to deal with the various major pieces of legislation Congress has passed since then. At some basic level, the very slow rebound in investment is troubling because it suggests that business doesn't perceive the U.S. economy as having opportunities for future growth.

A second possibility is that some small and medium-size firms may be having trouble finding sources of financing for investment. However,  many larger firms have sizable profits and are sitting on cash, with what appears to be the ability to borrow if they wish to do so, but they are not choosing to invest. Here's a figure from Summers's lecture showing corporate profits in recent years. 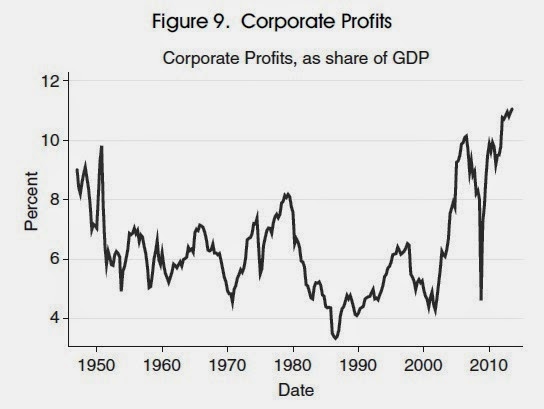 A third possibility is that despite running budget deficits and low interest rates at levels that would have astonished almost anyone back in 2007, there is still insufficient demand in the economy to encourage sufficient business investment.

A fourth possibility is that businesses are doing a lot of investment, but it's often a form of investment that involves reorganizing their firm around new information and communications technology--whether in terms of design, business operation, or far-flung global production networks. As a result, this form of investment doesn't involve enough demand to push the economy to full employment. Summers suggests this argument as a possibility in his talk as well.


Ponder that the leading technological companies of this age—I think, for example, of Apple and Google—find themselves swimming in cash and facing the challenge of what to do with a very large cash hoard. Ponder the fact that WhatsApp has a greater market value than Sony, with next to no capital investment required to achieve it. Ponder the fact that it used to require tens of millions of dollars to start a significant new venture, and significant new ventures today are seeded with hundreds of thousands of dollars. All of
this means reduced demand for investment ...

As another way to see this point, here's a price index for capital equipment. As Summers says: "Cheaper capital goods mean that investment goods can be achieved with less borrowing and spending,
reducing the propensity for investment." 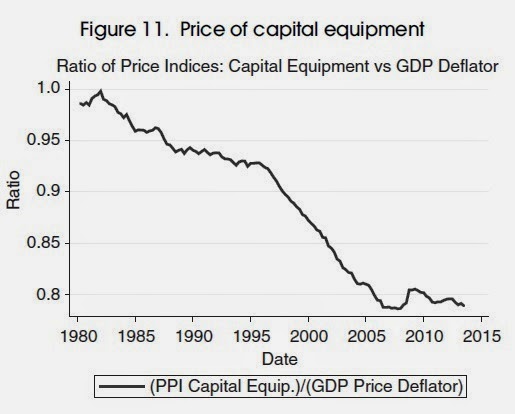 What might be done to encourage a resurgence in business investment? Low interest rates and large government budget deficits haven't been a sufficient answer so far.

One suggestion from Summers is large boost in government spending on infrastructure. I confess that this idea leaves me a little cold. Sure, we can all think of examples where infrastructure spending would be useful. Summers likes to kvetch about the griminess of Kennedy Airport. Here in Minnesota, a major bridge in Minneapolis suddenly collapsed in August 2007, killing 13 people and injuring more than 100. For economists, the trick with infrastructure spending is always to think about the right mixture of price incentives to manage congestion and damage along with pouring concrete--and to try to focus on projects with a large payoff, not just pork barrel spending. While I can easily support appropriately targeted and priced infrastructure spending, I don't think that growth in the 21st century economy is going to be built on wider highways.

Summers also suggests actively promoting and encouraging exports, and I've argued on this blog a number of times that the U.S. should be trying to build ties with the faster-growing portions of the world economy. Of course, this is a somewhat indirect way to encourage investment.

Back in the 1960s and 1970s, the government used to enact an "investment tax credit" when the economy was slow. The notion was that firms often have some investment plans up their sleeves, for when times get better. By offering a tax credit that expires in a year or two, you encourage firms to get off their duffs and move those future plans up to the present. The broad-based investment tax credit was always controversial, and it died off with the Tax Reform Act of 1986. Instead, there are now little mini-credits for specific investments like those in cleaner  energy. But given the current investment slump, perhaps a broader investment tax credit should be considered.

Summers also writes in general terms of "regulatory and tax reforms that would promote private
investment," and that agenda seems worth pursuing, too. The U.S. corporate tax code seems clearly out-of-whack with the rest of the world. Back in 1938, Alvin Hanson wrote that one traditional stimulation to investment is the discovery of new resources, and the breakthroughs in unconventional natural gas drilling seem to offer a classic opportunity both to provide cheaper energy to the US economy in a way that respects and addresses the environmental issues. And for fans of infrastructure spending, the energy boom offers a number of opportunities for rail and pipelines.

Finally, I believe that in the 21st century, the U.S. is more dependent on an ability to translate research and development into new products and industries than ever before. R&D spending has been stagnant as a share of GDP for decades. Setting a goal of doubling R&D spending might also be a way to give U.S. business investment a big push.  But one way or another, the U.S. economy isn't going to be roaring again--and the U.S. labor market isn't likely to recover fully--until U.S. firms start making major new investments in new plant and equipment.