It's a simple question: How well does the scientific research on health care issues match up with what health conditions impose the highest costs on people? James A. Evans, Jae-Mahn Shim, and John P. A. Ioannidis tackle this question in "Attention to Local Health Burden and the Global
Disparity of Health Research," which appears in the April 2014 issue of PLOS One.

They make a plausible case that health care R&D is not correlated with actual health condisions. Measure the amount of health care R&D effort by looking at the number of research articles published in that area, labelled on the right-hand axis. Measure the effect of various health care problems by looking at estimates from the World Health Organzation on DALYs--which stands for disability-adjusted life years, on the left-hand axis. The idea of DALYs is not just to measure lives lost, but also to measure health costs that might, for example, result in losing half of one's ability work in a given year. The figure shows that these measures of actual health conditions and medical R&D do not line up well. 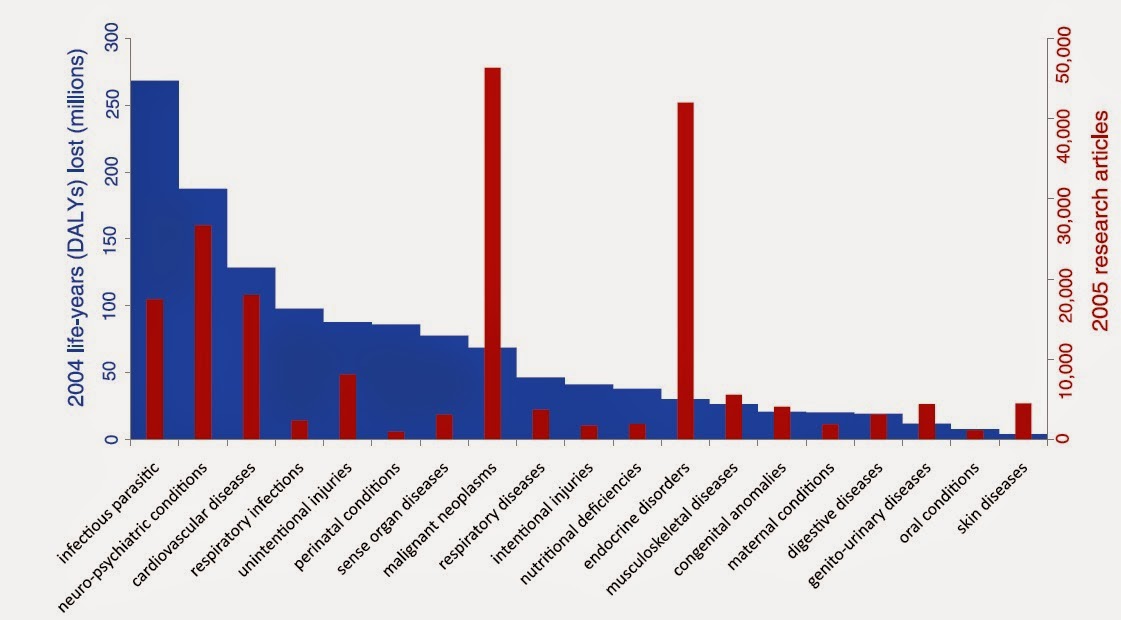 Of course, one wouldn't expect the correlation to be perfect. At any given time, some scientific areas are surely more "ripe" for discoveries than others. Making substantial progress against a disease with a smaller footprint beats making little or no progress against a disease with a larger footprint. But still, a correlation of essentially zero between health conditions and medical research should raise some eyebrows.


For example, consider the relative burden of infectious and malignant neoplasms (cancers) in rich and poor countries. Infectious diseases like diarrheal diseases, malaria and HIV naturally levy a much higher toll in less developed countries, while cancers incur a larger burden in more developed countries with longer life spans. Respiratory infections, perinatal conditions and injuries disproportionately afflict less developed countries, while neuro-psychiatric conditions like depression and schizophrenia and musculoskeletal diseases like arthritis and back pain represent a greater burden in wealthy countries. Note the conditions that most afflict poor populations only lightly affect the rich (e.g., infectious diseases, respiratory infections, perinatal conditions), while diseases that most afflict rich populations also levy a substantial toll on poor ones (e.g., cancers, neuro-psychiatric and musculoskeletal disorders). . . .

The authors raise a potentially deeper problem as well: "Not only environmental but the biological context of disease is likely to be different in less developed countries." An understanding of certain disease based on the populations and environmental conditions of high-income countries may be only partly transferable to the occurrence of that same disease in low-income countries.

It seems clear that medical research is, to a considerable extent, chasing market size, not disease burden. When you consider the number of advertisements for treatments to grow hair or to improve the sex lives of older men, who can doubt it?