During discussions of US health care policy, there is often be a moment when someone asks--sometimes angrily, sometimes plaintively, sometimes just wondering--"Why can't the U.S. just have a universal coverage single-payer system like every other country seems to have?" The question is at some level reasonable, but it's also makes me wince a bit. It seems to presume--sometimes angrily, sometimes plaintively, sometimes just wondering--that other countries have all found a clear and simple answer to health care financing issues. But other high-income countries actually have a fair amount of variety in their health care systems, and they are all struggling in different ways with the unavoidable realities of health insurance. Mark Stabile and Sarah Thomson discuss "The Changing Role of Government in Financing Health Care: An International Perspective," in the June 2014 issue of the Journal of Economic Literature (52:2, pp. 480-518). (The JEL is not freely available on-line, but many readers will have access through library subscriptions._

Stabile and Thomson focus on seven countries: Australia, Canada, France, Germany, Switzerland, the United Kingdom--and for comparison purposes, the United States. In my own reading of their paper, here are some of the practical challenges and issues that arise, even when health insurance is universal.

How should health care be financed?

Funds for health care can come from several sources: general government revenues, an earmarked tax for health care, private insurance, out-of-pocket payments by patients, and other sources including charitable foundations. The figure shows how these differ across countries. The UK, Canada, and Australia, for example, rely heavily on general tax revenues. The U.S., with its earmarked Medicare tax, is more similar to France, Germany, and Switzerland in using an earmarked tax. Private insurance is predictably a larger share of health care finance in the U.S. than in these other countries--but all of them continue to have non-negligible private health insurance. Out-of-pocket payments are common in other high-income countries: indeed, the share of total health spending that comes out-of-pocket from patients is larger in several of these countries than in the United States, although many countries have some cap on the total out-of-pocket payment. 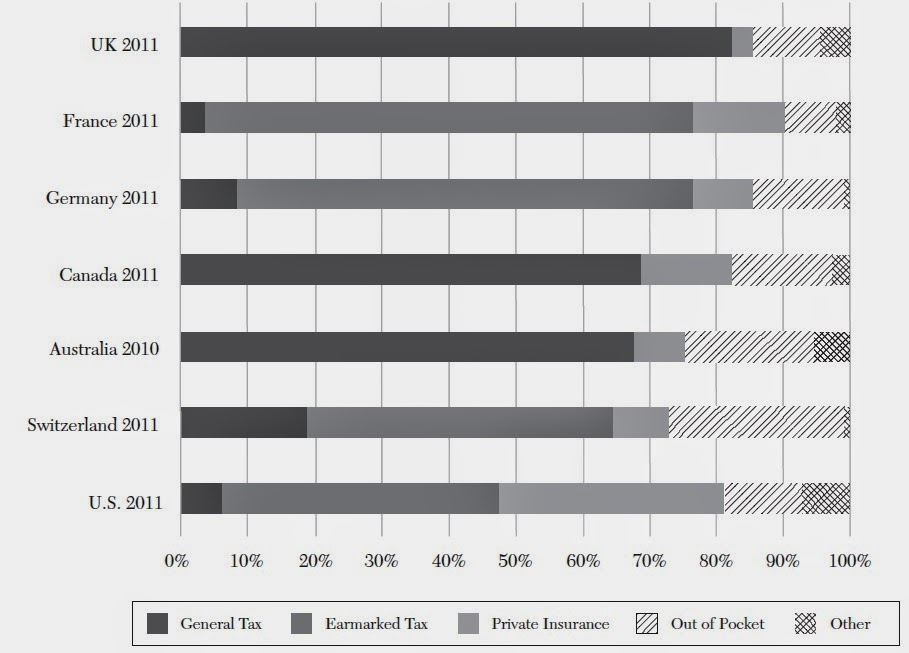 The health care finance arrangements in several of these countries have evolved fairly recently. Stabile and Thomson explain (citations omitted):


Universally compulsory coverage is a relatively recent development in France, Germany, and Switzerland. Switzerland introduced compulsory universal coverage in 1996 to address concerns about unequal access to health insurance, gaps in coverage and rising health expenditures. Before 2000, SHI [statutory health insurance] in France was compulsory for workers and their dependents and voluntary for everyone else; those who could not afford to pay the fixed (nonincome-related) contribution for voluntary coverage relied on locally administered government subsidies. In 2000, France broke the link with employment and extended income-related contributions to all residents, with free access to health insurance for those with very low incomes. In 2009, Germany introduced compulsory universal coverage to stem the growing number of uninsured people, but it maintained the link between statutory coverage and employment. Germany is the only OECD country to allow higher earners to opt out of contributing to the SHI scheme and to be privately covered, instead.


How can problems of risk pooling?

These countries all wish to allow a fair degree of choice for patients between primary care physicians and hospitals. In this setting, how should the health care providers who treat a higher-than-average share of those with more costly health conditions be compensated?

For example, one option is to subsidize high-risk individuals with vouchers or payments that let them purchase health insurance. Another option is to subsidize an insurance company for accepting high-risk patients. For example, in Switzerland people choose among 35 health insurance companies, and those with pre-existing health risks and conditions get a government subsidy so that what they pay for health insurance is the same as what others would pay. Another option is to adjust payments to health care providers in a way that is linked to the kinds of patients they treat--but also seeks to avoid having health care providers game the system by finding ways to receive extra compensation. As Stabile and Thomson note, all of these countries are tweaking how their payment systems respond to risk.

How to pay for performance?

In a system of universal coverage, there is still a wish to have different providers compete to some extent against each other, so that there can be incentives for innovation and finding ways to hold down costs. There are a variety of ways to do this, and the approaches have been evolving over time.

For example, one basic approach is to pay for the total number of patients treated, and to pay an amount that represents the average cost per patient treated. The hope is that hospitals, knowing they won't get extra pay, will find ways to trim costs. The harsh reality is that many hospitals will find ways to undertreat patients or avoid treating sick patients, as a way of holding costs down. Thus, a fallback approach called "diagnostic related groups" involves defining different diagnoses, and paying hospitals the average cost for each diagnosis. It's a little harder to game this system, but not much. Hospitals have some power to manipulate who is in what diagnostic related group in the first place, and to be very available to patients with some conditions and not others.

Thus, there have been experiments with various pay-for-performance health care systems, where there is some kind of formula that includes how many patients, their condition, their waiting times, the use of preventive care, the prevalence of avoidable infections, and many other factors to come up with a formula for payment. For example, UK physicians have a list of 65 indicators of quality of care. Again, the question of what indicators apply to what patients, and how much the pay of the doctor is adjusted for each indicator, open up possibilities for gaming the system. These systems only become more complex when trying to encourage experimentation with new technologies and methods of care delivery.

These experiments with diagnostic related groups and pay-for-performance do seem, on average, to improve care and efficiency. But they are a continual work in progress.

My point here is not to defend the U.S. system of health care finance, either as it existed before the Patient Protection and Affordable Care Act of 2009 or since. I've noted that the U.S. health care system had genuine problems, and that the 2009 act is at best a partial and quite disruptive way to address those problems. Instead, the point is that even universal coverage health care financing systems require a bunch of practical choices and challenges. Setting up a health insurance system that offers the right incentives to patients and providers for cost-effectiveness and innovation is a fundamentally difficult task, and those practical challenges don't disappear just by invoking talismanic phrases like "universal coverage" or "single-payer."