Trade in Services Begins to Blossom

At least since the writing of David Ricardo in the early 19th century, economists have taught their little lessons about the potential economic benefits of trade with examples that used goods. Ricardo's famous illustration of comparative advantage involved production of wine and cloth. Generations of modern textbooks have written about oil and wheat, cars and computers, and many other pairs of goods. But the notion of international trade as involving physical goods is eroding. Prakash Loungani and Saurabh Mishra lay out some of the patterns in "Not Your Father’s
Service Sector," appearing in the June 2014 issue of Finance & Development.

The basic story is that the revolution in information and communications technology has broken the old geographic bonds, where a service needed to be consumed where it was produced. Now, a wide array of services to be carried out in one place and consumed elsewhere. Loungani and Mishra write:

Using telecommunication networks, service products can be transported almost instantly over long distances. The range of service activities that can be digitized and globalized is expanding, from the processing of insurance claims and tax payments to the transcription of medical records to the provision of education via online courses. . . .And advanced market firms are stripping out the more standardized portions of their high value–added activities and relocating them to emerging market economies. Witness mushrooming business consulting and knowledge-processing offices and the boom in e-commerce and online retailers in emerging markets across the Middle East, Brazil, China, India, and Singapore. . . . The good news is that the spread of the service sector—and of service exports—in developing economies has outstripped the oft-cited example of information technology growth in India. Think of the mobile revolution that has transformed financial services in many countries in Africa, the Nigerian film industry, game design in Cambodia, accounting services in Sri Lanka, and human resources–processing firms in Abu Dhabi.

Trade in services has been growing almost three times as fast as trade in goods over the last decade or so. "Though measuring services trade is difficult, it appears that developing economies’ share in world service exports increased from about 14 percent in 1990 to 25 percent in 2011." 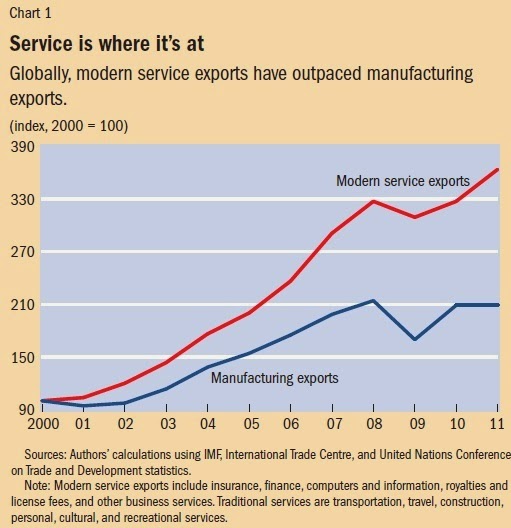 Along with the developments in information and communications technology, the other big change is that services are in the process of becoming a bigger share of the overall value even for  many products that are sold as physical goods. Loungani and Mishra quote the old Silicon Valley line that
“70 percent of hardware is software.” They also point out that, in a truly ugly neologism, some writers have labelled this change as the “servitization of manufacturing.”

This argument is often phrased in terms of the "smile" diagram credited to management
guru Ram Mudambi. It suggests that companies will set up production chains within and across national borders depending on the amount of value created at different stages of production. Mudambi argues that for modern manufactured good, much of the value-added for the final product is created in the early stages of R&D, design and commercialization,and in the late stages of marketing, logistics, and after-sales services. 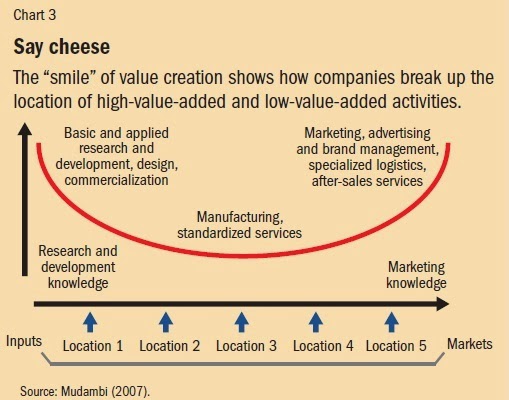 As global trade shifts to a greater emphasis on services, I suspect that it will begin to change the fundamental ways in which we think about what international trade means.

Global supply chains in services are enabled by information technology, not by ports, planes, trains and highways. Trade in services may be able to shift very rapidly: after all, if a company is buying a service to be delivered on-line, it may have  allegiance to the geographic location where that service is being performed. As the capabilities of information technology increase, and the speed and clarity and immediacy of online connections deepen, my suspicion is that many types of production will end up being divided and subdivided between locations in ways we have not yet begun to imagine.

And ultimately, I expect that the growth in services trade will reduce pressures for protectionism. Instead of talking about hypothetical trade in hypothetical completed goods--like cars and computers--it will become clear that portions of the value-added are often being created in different places. Pushing for trade protectionism in the name of specific products made in other countries like cars or steel or televisions is one thing, but I'm not sure any similar protectionist movement will form to prevent, say, insurance record-keeping or checking diagnostic X-rays from happening in another country. In addition, countries will need to be wary of placing tariffs or other restrictions on imports, because many imports will be part of a global production chain, and domestic produces will be quick to point out how inhibiting their access to those global connections will injure the domestic economy.