All You Need to Know about Disability Insurance

Earl Pomeroy and Jim McCrery are both former Congressmen who in the past headed the Social Security Subcommittee of the House Ways and Means Committee. Pomeroy is a Democrat from North Dakota and McCrery is a Republican from Louisiana. They have co-chaired something called the SSDI Solutions Initiative on behalf of the Committee for a Responsible Federal Budget, which is a nonpartisan Washington DC public policy organization that's been around since the 1980s. The group has now produced a volume of essays called SSDI Solutions: Ideas to Strengthen theSocial Security Disability Insurance Program, and chapters can be downloaded individually online.

If you want to get up to speed on the current status and issues facing Disability Insurance, along with a range of proposals for improving it, this volume should be your go-to starting point. Just to skim through the basics, which Patricia Owens lays out in detail in her essay, the share of working-age men receiving DI rose from 3.0% in the late 1970s to 4.5% in 2013; for women, the DI rate went from 1.4% in the late 1970s to 4.3% by 2013.

In the late 1970s, 3.0 percent of working-age men received SSDI, increasing to 3.8 percent before the recession and 4.5 percent by 2013, while the corresponding SSDI receipt rates for working-age women went from 1.4 percent, to 3.5 percent, and 4.3 percent, respectively. A number of economic, demographic, and policy factors went into this change. For example, back in the 1970s a lower percentage of working-age women had been  in the (paid) workforce in a way that made them eligible for DI in the first place.

The revenue for DI is part of the payroll tax that also funds Social Security and portions of Medicare. There is a separate DI trust fund, which was about to run out of money this year before a last-minute short-term fix in the Bipartisan Budget Act of 2015, which reallocated some of the rest of the payroll tax over to the DI trust fund, and should keep the fund solvent until 2022. But more substantial changes are needed. Here's a figure from the Owens paper showing the long-run projections of revenues and costs for DI. Clearly, there's a gap to be closed. 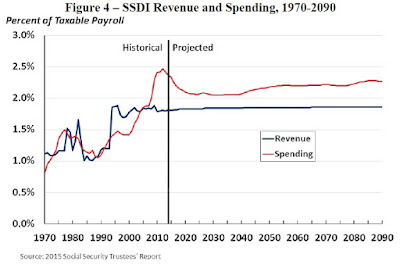 One perplexing bit of evidence is that although SSDI is a national program, and thus in theory applies to everyone in the country equally, there are some dramatic differences in how the program applies across the country. For example, the share of the population receiving DI can vary across states.  Here's an illustrative figure from the Owens paper. DI rates are the lowest in Alaska and Hawaii, and tend to be 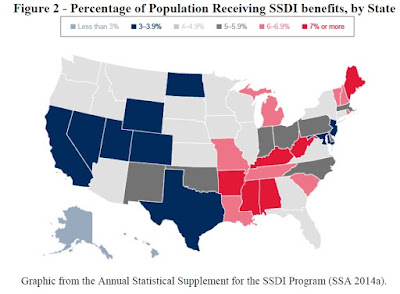 Some of this difference seems to reflect not differences in the characteristics of those receiving disability, but rather differences in the process for granting disability benefits across state. As one example from the overview paper by Pomeroy and Jim McCrery, some of the Administrative Law Judges who hear appeals about whether someone should receive DI are very likely to grant those appeals, while others are not: "There also appears to be considerable (albeit shrinking) decisional inconsistency among judges. In 2010, for example, one ALJ in Texas approved only 9 percent of applications for benefits while another in Tennessee approved 99 percent ..."

I found myself especially interested in the international comparisons chapter by Robert Haveman: "Approaches to Assisting Working-Aged People with Disabilities: Insights from Around the World." A number of other high-income countries have experienced rising levels of disability and rising program costs, and some of those countries enacted substantive reforms in the last two decades, which may have lessons for US policymakers. For a quick sense of some of the differences, check this table from Haveman's 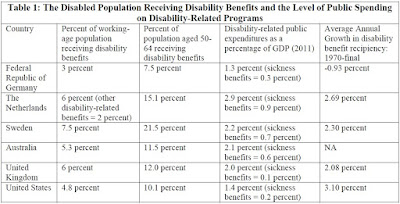 Of this comparison group, the share of the population receiving disability payments looks especially high in Sweden and Netherlands (notice that more than one-fifth of all Swedes in the 50-64 age bracket are receiving disability benefits), and quite low in Germany, with the US in the middle. When it comes to annual growth in the recipiency of disability in the last few decades,the US leads the way.

What are some of the changes in other countries? Haveman offers an overview of the countries in the table and other high-income countries, and suggests this summary:

"Across the countries studied, a number of options to better manage the disability pension caseload—aside from reforms to the public sickness benefit programs—have been pursued; these include:

Not coincidentally, the bulk of the Pomeroy/McCrery volume involves a range of proposals by various authors that could improve the ability of the US SSDI program to meet its goal of helping the disabled and also help to save money: early intervention proposals to help people stay in the workforce rather than ending up on DI rolls;  improve program administration so that determinations of who is eligible to receive DI can be faster and more accurate; help DI work better with other programs often related disability, like worker's compensation and long-term care programs; and structural reforms, like changing the rules so that disability is not all-or-nothing, forever, but it could where appropriate become simpler for some of those who experience disability to return to the workforce, or the possibility of allowing a combination of partial disability and part-time work. Here's the full Table of Contents with links to PDFs of all the chapters. Physical copies of the book can be bought on Amazon.com.

10. "Ensuring Access to Long-Term Services and Supports for People with Disabilities and Chronic Conditions," by Mark Perriello
Full Chapter

13. "Beyond All or Nothing: Reforming Social Security Disability Insurance to Encourage Work and Wealth," by Jason J. Fichtner and Jason S. Seligman
Full Chapter
Summary Slides

Posted by Timothy Taylor at 9:29 AM