Economics of Hosting the Olympics

The Summer Olympics starts in Rio de Janiero in August. From the financial point of view of the host city, it's very likely to be a money-losing proposition--just like almost all the other Olympic games in recent decades. Robert A. Baade and Victor A. Matheson describe the potential benefits and certain costs facing cities that host an Olympic Games in "Going for the Gold: The Economics ofthe Olympics," in the Spring 2016 issue of the Journal of Economic Perspectives. They write:


"In this paper, we explore the costs and benefits of hosting the Olympic Games. On the cost side, there are three major categories: general infrastructure such as transportation and housing to accommodate athletes and fans; specific sports infrastructure required for competition venues; and operational costs, including general administration as well as the opening and closing ceremony and security. Three major categories of benefits also exist: the short-run benefits of tourist spending during the Games; the long-run benefits or the “Olympic legacy” which might include improvements in infrastructure and increased trade, foreign investment, or tourism after the Games; and intangible benefits such as the “feel-good effect” or civic pride. Each of these costs and benefits will be addressed in turn, but the overwhelming conclusion is that in most cases the Olympics are a money-losing proposition for host cities; they result in positive net benefits only under very specific and unusual circumstances. Furthermore, the cost–benefit proposition is worse for cities in developing countries than for those in the industrialized world."


Consider the costs in a bit more detail. "The International Olympic Committee requires that the host city for the Summer Games have a minimum of 40,000 hotel rooms available for spectators and an Olympic Village capable of housing 15,000 athletes and officials.." For example, Rio had 25,000 hotel rooms, and thus committed to build an additional 15,000. Not surprisingly, lots of hotels typically go broke after a Games. Next come facilities themselves:


"Even modern cities in high-income countries may need to build or expand an existing velodrome, natatorium, ski-jumping complex, or speed skating oval. Furthermore, modern football and soccer stadiums are generally incompatible with a full-size Olympic track, because including space for such a track would cause an undesirably large separation between the fans and the playing field. For this reason, Boston’s failed bid to host the 2024 Summer Games had proposed $400 million to build an entirely new stadium for the track and field events, despite the presence of four large existing outdoor sports stadiums in the area."

Then add running the Games themselves. Security costs alone for a Summer Olympics has been running at $1.6 billion. How does this compare to revenues received by the Organizing Committee for the Game? Here are some illustrative estimates from the 2010 Winter Games in Vancouver and the 2012 Summer Olympics in London. The revenues don't cover even one-third of the costs. 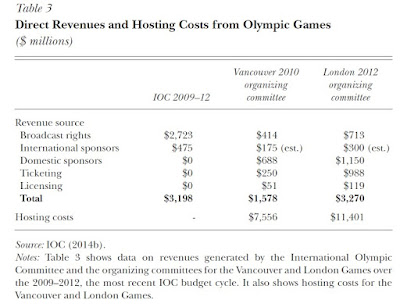 Thus, the economic case for hosting an Olympics must rely on lots and lots of spinoff benefits: construction jobs, tourist spending during the Games, a legacy of lasting infrastructure, improved recognition for the city that could help the city after the Games. But except in a few cases, these benefits turn out to shrink in size the more you look at them.

Sure, tourists come for an Olympics. But other tourists who want to avoid the Olympics--and locals, too--leave town. The number of international visitors to London during the months of those 2012 Summer Olympics was actually lower than the previous year, and Beijing saw a fall in international tourists in 2008 compared to the same months the previous year. Those extra hotel rooms do raise profits of the tourism industry, which is a boost to their shareholders and out-of-town management. Systematic studies show the Games offer a very small boost to the local economy when they are happening, but not a lasting gain. That promise of lasting infrastructure often ends up looking like a white elephant.


Many of the venues from the Athens Games in 2004 have fallen into disrepair. Beijing’s iconic “Bird’s Nest” Stadium has rarely been used since 2008 and has been partially converted into apartments, while the swimming facility next door dubbed the “Water Cube” was repurposed as an indoor water park at a cost exceeding $50 million (Farrar 2010). The Stadium at Queen Elizabeth Olympic Park in London, the site for most of the track and field events as well as the opening and closing ceremonies in 2012, was designed to be converted into a soccer stadium for local club West Ham United in order to avoid the “white elephant” problem. Before the Games, the stadium had an original price tag of £280 million. Cost overruns led to a final construction cost of £429 million, and then the conversion cost to remove the track and prepare the facility to accommodate soccer matches topped £272 million, of which the local club is paying only £15 million ...

The idea that an Olympics will raise the long-term visibility of a city works now and then: arguably it worked for the 2002 Winter Games in Salt Lake City and for the Summer Games in Barcelona in 1992. But more often, the city is either already just about as well-known as it is likely to be (London, Beijing, Rio) or it is small or remote enough that it doesn't benefit from greater long-term visibility (Lillehammer, Calgary).

The International Olympic Committee has professed to be concerned about the rising costs of the Games. I'm skeptical about the depth of this concern. But if the concern is real, then the IOC will look at future bids differently. For example, it will encourage cities with lots of existing facilities that could be used for the Games, and discourage the building of fancy, costly new structures or hosting spectacularly expensive opening and closing ceremonies. The IOC might choose a limited number of cities and rotate the Games between them, or have the Games happen in the same city twice in succession. It's a crazy idea, I know, but maybe the focus could shift back from promotionalism to the actual athletes and events.