What Was Different About Housing This Time?

Everyone knows that the Great Recession was tangled up with a housing boom that went bust. But more precisely, what was different about housing in the most recent business cycle? Burcu Eyigungor discusses "Housing’s Role in the Slow Recovery" in the Spring 2016 issue of Economic Insights, published by the Federal Reserve Bank of Philadelphia.

As a starting point, here's private residential fixed investment--basically, spending on home and apartment construction and major renovations--as a share of GDP going back to 1947. Notice that this category of investment falls during every recession (shown by the shaded areas) and then usually starts bouncing back just before the end of the recession--except for the period after 2009. 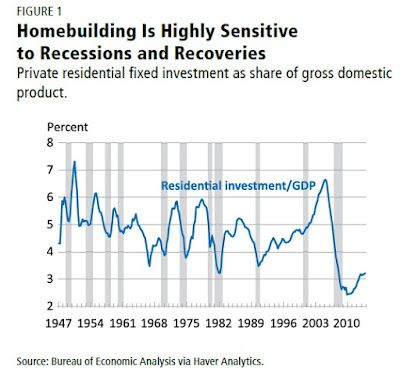 
The housing boom from 1991 to 2005 was the longest uninterrupted expansion of home construction as a share of overall economic output since 1947 (Figure 1). During the 1991 recession, private home construction had constituted 3.5 percent of GDP, and it increased its share of GDP without any major interruptions to 6.7 percent in 2005. This share was the highest it had been since the 1950s. Just like the boom, the bust that followed was also different from earlier episodes. During the bust, private residential investment as a share of GDP fell to levels not seen since 1947 and has stayed low even after the end of the recession in 2009. In previous recessions, the decline in residential construction was not only much less severe, but the recovery in housing also led the recovery in GDP. As Federal Reserve Chair Janet Yellen has pointed out, in the first three years of this past recovery, homebuilding contributed almost zero to GDP growth.

There are two possible categories of reasons for the very low level of residential building since 2009. On the supply side, it may not seem profitable to build, given what was already built back before 2008 and the lower prices. On the demand side, one aftermath of the Great Recession could plausibly be that at least some people are feeling economically shaky and mistrustful of real estate markets. and so not eager to buy.

Both supply and demand presumably played some role. But housing prices have now been rising again for about three years, and the "vacancy" rates for owner-occupied housing and rental housing are back to the levels from before the Great Recession. In that sense, it doesn't look as if an overhang of empty dwellings or especially low prices are the big problem for the housing market. Instead, Eyigungor argues that the demand side of the housing market is holding back the housing market. 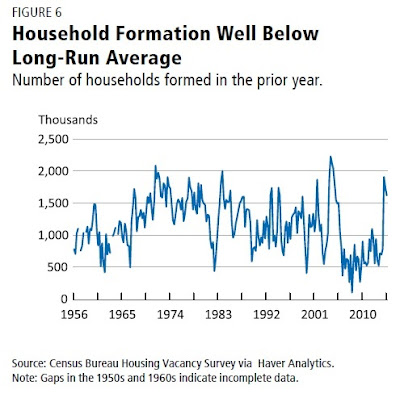 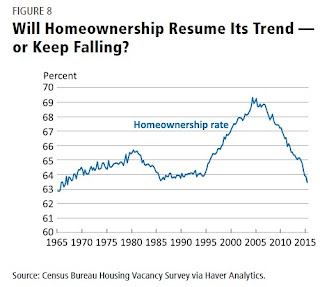 Spending on housing usually helps lead the US economy out of recession, but not this time. The demand from new household formation hasn't been there. As I've pointed out in the past, both the Clinton administration with its National Homeownership Strategy and the Bush administration with its "ownership society" did a lot of bragging about that rise in homeownership rates from the mid-1990s up through about 2007. The gains to homeownership from those strategies has turned out to be evanescent, while some costs associated with those strategies have been all too real.
Posted by Timothy Taylor at 8:00 AM