US Health Care in International Context

Health Care at a Glance 2015 is an OECD databook: that is, a bit of text, but mainly charts and figures. It serves up the standard comparisons of US health care spending in the context of the rest of the world,  along with a number of detailed comparisons of health status, the health care workforce, access to health care, quality of care, and others.

Let me start with the comparisons of US health care spending to the rest of the world, which are both familiar to me and also never fail to astonish my eye. US per capita health care spending is more than one-third bigger than any other country; moreover, it's two-and-a-half times as large as the average of OECD countries. 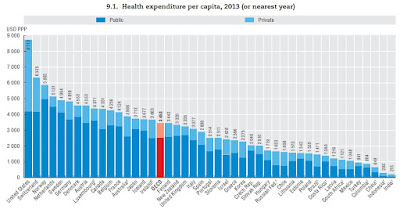 The US doesn't just spend more because it's a higher-income economy. As a share of GDP, the US spends more than five percentage point of GDP more than the second-place country; in addition, it spends nearly twice as much on health car as a share of GDP than the OECD average. 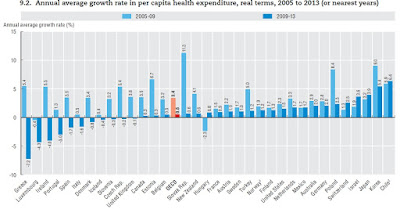 It's also well-known that despite the relatively high levels of US health care spending, US public health statistics aren't  especially good. Although the US doesn't measure up very well to other countries on access to health care, given that about 27 million Americans still lack health insurance, the causes of poor health go a lot deeper than the health care system. As the report notes:


"Life expectancy in the United States is lower than in most other OECD countries because of higher mortality rates from various health-related behaviors (including higher calorie consumption and obesity rates, higher consumption of legal and illegal drugs, higher deaths from road traffic accidents and homicides), adverse socio-economic conditions affecting a large segment of the US population, and poor access and co-ordination of care for certain population groups."

So what is the US getting for its health care spending? Here are some tips and clues from the report. I'll let you look up the specific tables yourself, if you wish, and just cut to some of the comparisons that caught my eye.

However, when it comes to measures of the efficacy of high-tech medical interventions, the US health care system performs well. For example, one such measure is the share of people over-45 admitted to a hospital with acute myocardial infarction (AMI) who die with 30 days. The OECD average is about 8 per 100 cases, while in the US it's 6 per 100 cases. Similarly, if you look at the thirty-day mortality rate after admission to hospital for ischemic stroke, the OECD average is about 8 per 100 admissions, while in the US it's about 4 per 100 admissions.

A few years back, I tackled the broader question of "Why does the US Spend More on Health Care than Other Countries?" (May 14, 2012).  Here, I'll just note that the US ends up with a health care system that excels at high tech, high cost care, but does an average to below-average job at other aspects of health care. The OECD report notes that the US manages to have one of the highest five-year survival rates for those with breast cancer, but a substantially below-average five-year survival rate for cases of cervical cancer.

Many discussions of the US health care system take most of how it operates for granted, and then argue over "single payer" or "health care exchanges" or expanding Medicare. My sense is that  specific comparisons across countries can be a useful way to shake up thinking. For another recent post with this element, see "A Cross-National View of Health Care Systems: Thoughts on Canada, the UK, and Germany" (March 10, 2016).
Posted by Timothy Taylor at 8:33 AM