A major technological innovation may be arriving in a very old industry: the production of meat. Instead of producing meat by growing animals, meat can instead be grown directly. The process has been happening in laboratories, but some are looking ahead to large-scale production of meat in "carneries."

This technology has a number of implications, but here, I'll focus on some recent research on how a shift away from conventionally produced meat to cultured or in vitro meat production could help the environment. Carolyn S. Mattick, Amy E. Landis, Braden R. Allenby, and Nicholas J. Genovese tackle this question in "Anticipatory Life Cycle Analysis of In Vitro Biomass Cultivation for Cultured Meat Production in the United States," published last September in Environmental Science & Technology (2015, v. 49, pp/ 11941−11949). One of the implications of their work is that factory-style meat production may produce real environmental gains for beef, but perhaps not for other meats.

Another complication is that not all production of vegetables has a lower environmental impact than, say, poultry or fresh fish. Michelle S. Tom,  Paul S. Fischbeck, and Chris T. Hendrickson provide some evidence on this point in their paper, "Energy use, blue water footprint, and greenhouse gas emissions for current food consumption patterns and dietary recommendations in the US," published in Environment Systems and Decisions in March 2016 (36:1, pp. 92-103),

As background, one of the first examples of the new meat production technology happened back in 2001, when a team led by bioengineer Morris Benjaminson cut small chunks of muscle from goldfish, and then immersed the chunks in a liquid extracted from the blood of unborn calves that scientists use for growing cells in the lab. The New Scientist described the results this way in 2002:


"After a week in the vat, the fish chunks had grown by 14 per cent, Benjaminson and his team found. To get some idea whether the new muscle tissue would make acceptable food, they washed it and gave it a quick dip in olive oil flavoured with lemon, garlic and pepper. Then they fried it and showed it to colleagues from other departments. "We wanted to make sure it'd pass for something you could buy in the supermarket," he says. The results look promising, on the surface at least. "They said it looked like fish and smelled like fish, but they didn't go as far as tasting it," says Benjaminson. They weren't allowed to in any case--Benjamison will first have to get approval from the US Food and Drug Administration."


The first hamburger grown in a laboratory was served in London in 2013. As an article from Issues in Science and Technology reported at the time: ""From an economic perspective, cultured meat is still an experimental technology. The first in vitro burger reportedly cost about $335,000 to produce and was made by possible by financial support from Google cofounder Sergey Brin." But the price is coming down: a Silicon Valley start-up is now making meatballs from cultured meat at $18,000 per pound.

Here's the summary of industrial energy use, which they view as definitely higher for in vitro meat than for pork and poultry, and likely to be higher for beef. They explain:


"These energy dynamics may be better understood through the analogy of the Industrial Revolution: Just as automobiles and tractors burning fossil fuels replaced the external work done by horses eating hay, in vitro biomass cultivation may similarly substitute industrial processes for the internal, biological work done by animal physiologies. That is, meat production in animals is made possible by internal biological functions (temperature regulation, digestion, oxygenation, nutrient distribution, disease prevention, etc.) fueled by agricultural energy inputs (feed). Producing meat in a bioreactor could mean that these same functions will be performed at the expense of industrial energy, rather than biotic energy. As such, in vitro biomass cultivation could be viewed as a renewed wave of industrialization."

With regard to global warming potential, in vitro production of meat is estimated to be lower than beef, but higher than poultry and pork. 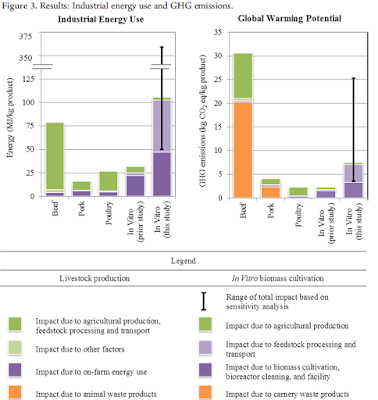 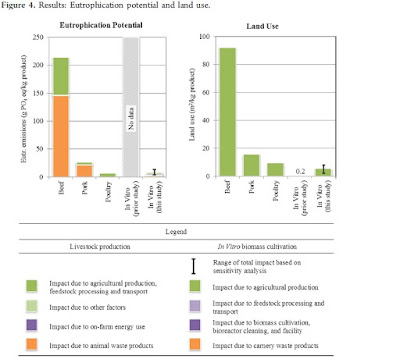 Of course, these estimates are hypothetical. No factory-scale production of cultured meat exists yet. But if the "carnery" does become a new industry in the next decade or so, these kinds of tradeoffs will be part of the picture.

As I noted above, it jumps out from these figures that traditional production of beef has a much more substantial environmental footprint than production of poultry or pork. In their paper, Tom, Fischbeck, and Hendrickson take on a slightly different question: what is the environmental impact of some alternative diet scenarios: specifically, fewer calories with the same mixture of foods, or same calories with an alternative mixture of foods recommended by the US Department of Agriculture, or both lower calories and the alternative diet. The USDA-recommended diet involves less sugar, fat, and mean, and more fruits, vegetables, and dairy.  But counterintuitively (at least for me), they find that the reduced calorie, altered diet choice has larger environmental effects than the current dietary choices. They write:

Why does a shift away from meat and toward fruits and vegetables create larger environmental effects? The authors do a detailed breakdown of the environmental costs of various foods along their three dimensions of energy use, blue water footprint, and greenhouse gas emissions. Here's an overall chart. An overall message is that while meat (excluding poultry) is at the top on greenhouse gas emissions, when it comes to energy use and blue water footprint, meat is lower than fruit and vegetables. 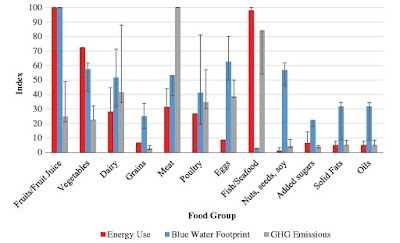 As the authors write: "[T]his study’s results demonstrate how the environmental benefits of
reduced meat consumption may be offset by increased consumption of other relatively high impact foods, thereby challenging the notion that reducing meat consumption automatically reduces the environmental footprints of one’s diet. As our results show food consumption behaviors are more complex, and the outcomes more nuanced." For a close-up illustration of the theme, here's a chart from Peter Whoriskey at the the Washington Post Wonkblog, created based on supplementary materials from the Tom, Fischbeck and Hendrickson paper. A striking finding is that on the dimension of greenhouse gas emissions, beef is similar to lettuce. The greenhouse gas emissions associated with production of poultry are considerably lower than for yogurt, mushrooms, or bell peppers. 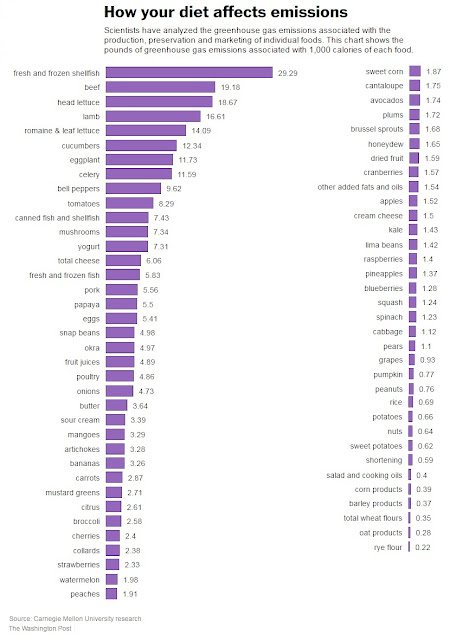 Again, the environmental costs of beef in particular are  high. If cultured meat could replace production of beef in a substantial way, it might bring overall environmental gains. But making defensible statements about diet and the environment seem to require some nuance. Lumping beef, pork, poultry, shellfish, and other fish all into one category called "meat" covers up some big differences, as does lumping all fruits into a single category or all vegetables into a single category.

Addendum: This post obviously focuses on environmental tradeoffs, not the economic tradeoffs that cultured meat would pose for farmers or the animal welfare tradeoffs for livestock. Jacy Reese writes about "The Moral Demand for Cultured Meat" from an animal welfare perspective in Salon, February 13, 2016.
Posted by Timothy Taylor at 9:42 AM