The economies of sub-Saharan Africa face a big question. Growth of real GDP in the last 15 year has averaged about 5% per year, as compared to 2% per year back in the 1980s and 1990s. But was this rapid growth mainly a matter of high prices for oil and other commodities, combined with high levels of China-driven external investment? If so, then Africa's growth is likely to diminish sharply now that oil and commodity prices have fallen and China's growth has slowed. Or was Africa's rapid growth in the last 15 years built at least in part on on sturdier and more lasting foundations? The June 2016 issue of Finance & Development, published by the International Monetary Fund, tackles this topic with a symposium of nine readable articles on "Africa: Growth's Ups and Downs." In addition, the African Economic Outlook 2016, an annual report produced by the African Development Bank, the OECD Development Centre and the United Nations Development Programme, provides an overview of the economic situation in Africa as well as a set of chapters on the theme of "Sustainable Cities and Structural Transformation."

The overall perspective seems to be that while growth rates across the countries of Africa seem certain to slow down, some of the rise in growth will persist--especially if various supportive public policy steps can be enacted. An article by Stephen Radelet in Finance & Development, "Africa's Rise--Interrupted?", provides an overview of this perspective.

In summing up the current situation, Radelet writes:


"At a deeper level, although high commodity prices helped many countries, the development gains of the past two decades—where they occurred— had their roots in more fundamental factors, including improved governance, better policy management, and a new generation of skilled leaders in government and business, which are likely to persist into the future. ... Overall growth is likely to slow in the next few years. But in the long run, the outlook for continued broad development progress is still solid for many countries in the region, especially those that diversify their economies, increase competitiveness, and further strengthen institutions of governance. ... The view that Africa’s surge happened only because of the commodity price boom is too simplistic. It overlooks the acceleration in growth that started in 1995, seven years before commodity prices rose; the impact of commodity prices, which varied widely across countries (and hurt oil importers); and changes in governance, leadership, and policy that were critical catalysts for change."


Here's a graphic showing some of the main changes across Africa in the last couple of decades. Radelet emphasizes that the countries of Africa are diverse, and economic policies and development patterns across the countries will not be identical. But he offers five overall themes for continued economic progress in African with relatively broad applicability.


First up is adroit macroeconomic management. Widening trade deficits are putting pressure on foreign exchange reserves and currencies, tempting policymakers to try to artificially hold exchange rates stable. Parallel exchange rates have begun to emerge in several countries. But since commodity prices are expected to remain low, defending fixed exchange rates is likely to lead to even bigger and more difficult exchange rate adjustments down the line. As difficult as it may be, countries must allow their currencies to depreciate to encourage exports, discourage imports, and maintain reserves. At the same time, budget deficits are widening, and with borrowing options limited, closing the gaps requires difficult choices. ...

Second, countries must move aggressively to diversify their economies away from dependence on commodity exports. Governments must establish more favorable environments for private investment in downstream agricultural processing, manufacturing, and services (such as data entry), which can help expand job creation, accelerate long-term growth, reduce poverty, and minimize vulnerability to price volatility. ... The exact steps will differ by country, but they begin with increasing agricultural productivity, creating more effective extension services, building better farm-to-market roads, ensuring that price and tariff policies do not penalize farmers, and investing in new seed and fertilizer varieties. Investments in power, roads, and water will be critical. As in east Asia, governments should coordinate public infrastructure investment in corridors, parks, and zones near population centers to benefit firms through increased access to electricity, lower transportation costs, and a pool of nearby workers, which can significantly reduce production costs. ... At the same time, the basic costs of doing business remain high in many countries. To help firms compete, governments must lower tariff rates, cut red tape, and eliminate unnecessary regulations that inhibit business growth. Now is the time to slash business costs and help firms compete domestically, regionally, and globally.

Third, Africa’s surge of progress cannot persist without strong education and health systems. The increases in school enrollment and completion rates, especially for girls, are good first steps. But school quality suffers from outdated curricula, inadequate facilities, weak teacher training, insufficient local control, teacher absenteeism, and poor teacher pay. ... Similarly, health systems remain weak, underfunded, and overburdened ...
Fourth, continued long-term progress requires building institutions of good governance and deepening democracy. The transformation during the past two decades away from authoritarian rule is remarkable, but it remains incomplete. Better checks and balances on power through more effective legislative and judicial branches, increased transparency and accountability, and strengthening the voice of the people are what it takes to sustain progress. ...

Finally, the international community has an important role to play. Foreign aid has helped support the surge of progress, and continued assistance will help mitigate the impacts of the current slowdown. Larger and longer-term commitments are required, especially for better-governed countries that have shown a strong commitment to progress. To the extent possible, direct budget support will help ease adjustment difficulties for countries hit hardest by commodity price shocks. In addition, donor financing for infrastructure—preferably as grants or low-interest loans—will help build the foundation for long-term growth and prosperity. Meanwhile, this is not the time for rich countries to turn inward and erect trade barriers. Rather, wealthy nations should encourage further progress and economic diversification by reducing barriers to trade for products from African countries whose economies are least developed.

One possible reaction to a list like that one is "yikes." If countries of Africa need all of those things to go right, then optimism about Africa's economic future begins to look like foolhardiness. But the other possible reaction is that not everything needs to go right all the time for ongoing progress to happen.

The African Development Outlook 2016 fleshes out many of these theme in more detail, and offers some of its own. One theme the report emphasizes is the centrality of urban areas to the development path in many African countries (citations omitted from quota.

The African continent is urbanising fast. The share of urban residents has increased
from 14% in 1950 to 40% today. By the mid-2030s, 50% of Africans are expected to become urban dwellers ... However, urbanisation is a necessary but insufficient condition for structural transformation. Many countries that are more than 50% urbanised still have low-income levels. Urbanisation per se does not bring economic growth, though concentrating economic resources in one place can bring benefits. Further, rapid urbanisation does not necessarily correlate with fast economic growth: Gabon has a high annual urbanisation rate at 1 percentage point despite a negative annual economic growth rate of -0.6% between 1980 and 2011.

In addition, the benefits of agglomeration greatly depend on the local context, including
the provision of public goods. Public goods possess non-rivalry and non-excludable benefits. Lack of sufficient public goods or their unsustainable provision can impose huge costs on third parties who are not necessarily involved in economic transactions. Congestion, overcrowding, overloaded infrastructure, pressure on ecosystems, higher costs of living, and higher labour and property costs can offset the benefits of concentrating economic resources in one place. These negative externalities tend to increase as cities grow. This is especially true if urban development is haphazard and public investment does not maintain and expand essential infrastructure. Dysfunctional systems, gridlocks, power cuts and insecure water supplies increase business costs, reduce productivity and deter private investment. In OECD countries, cities beyond an estimated 7 million inhabitants tend to generate such diseconomies of agglomeration. Hence, the balance between agglomeration economies and diseconomies may have an important influence on whether city economies continue to grow, stagnate or begin to decline.

The report also comments on what is calls "three-sector" development theory, with is the notion that economies move from being predominantly agricultural, to growth in manufacturing, to growth in services. In the context of African nations, it's not clear how economies with large oil or mineral resources fit into this framework, and in a world economy with rapidly growing robotics capabilities, it's not clear that low-wage manufacturing can work as a development path across Africa similar to the way that it did in, say, many parts of Asia. Here's a quick discussion of sectors of growth across Africa:


An examination of the fastest-growing African countries over the past five years reveals very different sector patterns (Table 1.2). In Nigeria, structural changes seem to be in accordance with traditional three-sector theory, as shares of the primary sector  declined while those of other sectors increased. The share of agriculture also declined in many other countries, but increased in Kenya and Tanzania. The share of extractive industries declined in some countries but increased in others as new production started and boosted growth (oil in Ghana and iron-ore mining in Sierra Leone). The share of manufacturing increased in only a few countries (Niger, Nigeria and Uganda), but remained broadly constant or even declined in many others. In contrast, the construction and service sectors were important drivers of growth in many countries. In short, African countries are achieving growth performance with quite different sectoral patterns. However, the simplistic three-sector theory can be misleading as productivity is not only raised by factor reallocation between sectors, but also through modernisation and reallocation within sectors, as well as via better linkages between sectors. In particular, higher productivity in agriculture can boost food processing and leather processing and manufacturing to the benefit of both sectors. 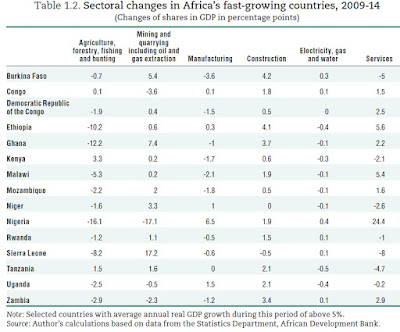 For me, the ongoing theme in all discussions of Africa's economic future is an oscillation between encouragement over the progress that has occurred and a disheartened recognition of how much remains to be done. For example, the report includes a figure showing that hotel rooms across the countries of sub-Saharan Africa have growth by two-thirds in the last five years. 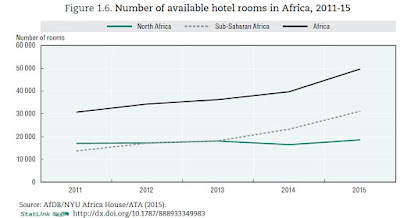 Hotels are in some ways a  proxy for a certain level of business development, mobility between cities, local income levels, and tourism potential, so this rise is promising. On the other side, the total for all of sub-Saharan Africa is roughly 50,000 hotel rooms, and for comparison, the city of Las Vegas alone claims to have almost 150,000 hotel/motel rooms.

For those who want more, where are links to the full list of articles about Africa in the June 2016 Finance & Development: