Many Americans worry about high incarceration rates and a police presence that can be heavy-handed or worse in some communities. Many Americans also are worrying about crime. For example, here's a Gallup poll result from early March: 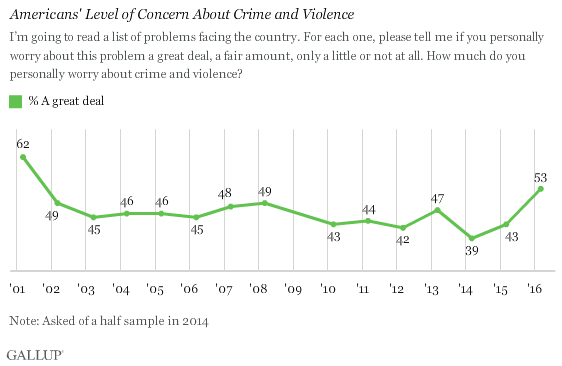 And law-abiding people in some communities, many of them predominantly low-income and African-American, can end up facing an emotionally crucifying choice. One one side, crime rates in their community are high, which is a terrible and sometimes tragic and fatal burden on everyday life. On the other side, they are watching a large share of their community, mainly men, becoming involved with the criminal justice system through fines, probation, fines, or incarceration. Although those who are convicted of crimes are the ones who officially bear the costs, in fact the costs when someone needs to pay fines, or can't earn much or any income, or can only be visited by making a trip to a correctional facility are also shared with families, mothers, and children. Magnus Lofstrom and Steven Raphael explore these questions of "Crime, the Criminal Justice System, and Socioeconomic Inequality" in the Spring 2016 issue of the Journal of Economic Perspectives.

(Full disclosure: I've worked as the Managing Editor of the Journal of Economic Perspectives for 30 years. All papers appearing in the journal, back to the first issue in Summer 1987, are freely available online, compliments of the American Economic Association.)

It's well-known that rates of violent and property crime have fallen substantially in the US in the last 25 years or so. What is less well-recognized is that the biggest reductions in crime have happened in the often predominantly low-income and African-American communities that were most plagued by crime. Loftrom and Raphael look at crime rates across cities with lower and higher rates of  poverty in 1990 and 2008:

As another example, Lofstrom and Raphael refer to a study which broke down crime rates in Pittsburgh across the "tracts" used in compiling the US census. As overall rates of crime fell in Pittsburgh, predominantly African-American areas saw the biggest gains:

It remains true that one of the common penalties for being poor in the United States is that you are more likely to live in a neighborhood with a much higher crime rate. But as overall rates of crime have fallen, the inequality of greater vulnerability to crime has diminished.

On the other side of the crime-and-punishment ledger, low-income and African-American men are more likely to end up in the criminal justice system. Lofstrom and Raphael give sources and studies for the statistics: "[N]nearly one-third of black males born in 2001 will serve prison time at some point in their lives. The comparable figure for Hispanic men is 17 percent ...  [F]or African-American men born between 1965 and 1969, 20.5 percent had been to prison by 1999. The comparable figures were 30.2 percent for black men without a college degree and approximately 59 percent for black men without a high school degree."

I'm not someone who sympathizes with or romanticizes those who commit crimes. But economics is about tradeoffs, and imposing costs on those who commit crimes has tradeoffs for the rest of society, too. For example, the cost to taxpayers is on the order of $350 billion per year, which in 2010 broke down as "$113 billion on police, $81 billion on corrections, $76 billion in expenditure by various federal agencies, and $84 billion devoted to combating drug trafficking." The question of whether those costs should be higher or lower, or reallocated between these categories, is a worthy one for economists.

But the costs explicitly imposed by the legal system are only part of the picture. For example, living in a community where it is common for you to experience or watch as people are regularly stopped and frisked is a cost, too. Lofstrom and Raphael discuss "collateral consequence studies: about how being in the criminal justice system affects employment prospects, health outcomes, and problem behaviors and and depression among children of the incarcerated. In addition, many local jurisdictions have dramatically increased their use of fines in the last couple of decades,, which can often end up being a high enough fraction of annual income for a low-income worker that they become nearly impossible to pay--then leading to additional fines or more jail time. The US Department of Justice Civil Rights Division report following up on practices in Ferguson, Missouri, noted an "aggressive use of fines and fees imposed for minor crimes, with this revenue accounting for roughly one-fifth of the city’s general fund sources." As Lofstrom and Raphael explain:


"Money is fungible. When fines and fees are imposed as part of a criminal prosecution, at least some of the financial burden will devolve on to the household of the person involved with the criminal justice system. When someone who is involved in the criminal justice system has reduced employment prospects, some of those financial costs will again be borne by others in their household. We have said nothing about the family resources devoted to replenishing inmate commissary accounts, the devotion of household resources to prison phone calls, time devoted to visiting family members, and the other manners by which a family member’s involvement with the criminal justice system may tax a household’s resources. To our knowledge, aggregate data on such costs do not exist."


"Many of the same low-income predominantly African American communities have disproportionately experienced both the welcome reduction in inequality for crime victims and the less-welcome rise in inequality due to changes in criminal justice sanctioning. While it is tempting to consider whether these two changes in inequality can be weighed and balanced against each other, it seems to us that this temptation should be resisted on both theoretical and practical grounds. On theoretical grounds, the case for reducing inequality of any type is always rooted in claims about fairness and justice. In some situations, several different claims about inequality can be combined into a single scale—for example, when such claims can be monetized or measured in terms of income. But the inequality of the suffering of crime victims is fundamentally different from the inequality of disproportionate criminal justice sanctioning, and cannot be compared on the same scale. In practical terms, while higher rates of incarceration and other criminal justice sanctions may have had some effect in reducing crime back in the 1970s and through the 1980s, there is little evidence to believe that the higher rates have caused the reduction in crime in the last two decades. Thus, it is reasonable to pursue multiple policy goals, both seeking additional reductions in crime and in the continuing inequality of crime victimization and simultaneously seeking to reduce inequality of criminal justice sanctioning. If such policies are carried out sensibly, both kinds of inequality can be reduced without a meaningful tradeoff arising between them."

While accusations of police brutality are often the flashpoint for public protests over the criminal justice system, my own suspicion is that some of the anger and despair focused on the police is because they are the visible front line of the criminal justice system. It would be interesting to watch the dynamics if protests of similar intensity were aimed at legislators who pass a cavalcade of seemingly small fines, which when imposed by judges add up to an insuperable burden for low-income families. Or if the protests were aimed at legislators, judges, and parole boards who make decisions about length of incarceration. Or if the protests were aimed at prisons and correctional officers. My own preference for the criminal justice system (for example, here and here) would be to rebalance the nation's criminal justice spending, with more going to police and less coming in  fines, and the offsetting funding to come from reducing the sky-high levels of US incarceration. The broad idea is to spend more on tamping down the chance that crime will occur or escalate in the first place, while spending less on years of severe punishments after the crime has already happened.