Information Technology and the US Workforce

Erik Brynjolfsson and Tom M. Mitchell serves as co-chairs of a "Committee on Information Technology, Automation, and the U.S. Workforce," which produced the report "Information Technology and the U.S. Workforce: Where Are We and Where Do We Go from Here?"  (March 2017). The report offers a nice overview of the extremely widespread adoption and application of information technology across the economy (which I'll skip over here) as well as discussion of the effects of information technology on productivity, employment, and inequality. Here, I'll just pass along a few comments on these themes. The emphasis of the report is on summarizing the various views and providing links to research, rather than on trying to draw hard bottom lines.


"[E]conomic and societal changes occasioned by technological developments are shaped, not just by the availability of new technologies and their features, but also by ideologies, power structures, and human aspirations and agendas. Technologies are not exogenous forces that roll over societies like tsunamis with predetermined results. Rather, our skills, organizations, institutions, and values shape how we develop technologies and how we deploy them once created, along with their final impact."


"A related, but more fundamental, issue is that productivity is neither a measure of technological progress nor welfare. Productivity is based on gross domestic product (GDP), which is in turn a measure of production or output. However, technological progress can increase welfare without increasing output. For instance, if Wikipedia replaces a paper encyclopedia or a free GPS mapping app replaces a stand-alone GPS device, then consumers can be better off even if output is stagnant or declining."

[In passing, I'll note that the Spring 2017 issue of the Journal of Economic Perspectives, where I toil in the fields as Managing Editor, has a three-paper symposium bearing on the issue of how or how much the measures of economic growth and productivity are biased by the arrival of new digital technologies. The three papers are "Underestimating the Real Growth of GDP, Personal Income, and Productivity," by Martin Feldstein; "Challenges to Mismeasurement Explanations for the US Productivity Slowdown," by Chad Syverson; and "How Government Statistics Adjust for Potential Biases from Quality Change and New Goods in an Age of Digital Technologies: A View from the Trenches," by Erica L. Groshen, Brian C. Moyer, Ana M. Aizcorbe, Ralph Bradley and David M. Friedman.]


"There have also been substantial shifts in employment in various occupational categories. For instance, the employment rate in clerical and sales jobs has fallen sharply, while employment in professional jobs has grown, as shown in Figure 3.1." 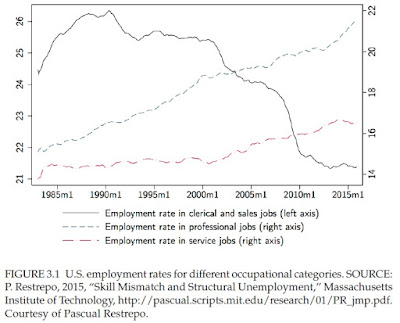 Technology Certainly Makes Some Jobs Obsolete, But Despite Centuries of Dire Predictions, It Has Not Led to Collapsing Demand for Labor

"Predictions that new technologies will make workers largely or almost entirely redundant are as old as technological change itself. Although the story might be apocryphal, the famous Roman historian Pliny the Elder recounts how the Roman Emperor Tiberius killed an inventor who had supposedly invented unbreakable glass for fear of what this would do to the glassmaking trade. Queen Elizabeth I similarly refused to grant William Lee a patent for his mechanical knitting machine, arguing, “Consider thou what the invention could do to my poor subjects.” ...

"However, predictions of widespread, technologically induced unemployment have not come to pass, at least so far. Technological changes over the last 200 years (and presumably many of those that came before) stimulated demand, created new markets, and fueled wage growth with few adverse consequences for aggregate employment. To be sure, technologies did and will continue to decimate particular occupations. As the Luddites feared, artisans lost their jobs in spinning and then weaving
as new technologies automated tasks they had previously performed. Similarly, the replacement of horses by automobiles eliminated the need for blacksmiths. But as these jobs disappeared, new ones sprang up to operate, manage, and service the new technologies. For instance, in the late 1800s, the replacement of the stagecoach by the railroad went hand in hand with the creation of new work for managers, engineers, machinists, repairmen, and conductors. Simultaneously, there was a boom in a range of new service occupations, from teaching to entertainment to sales. Nonetheless, simultaneous automation of a broader range of tasks could create unemployment or perhaps reduce aggregate levels of employment for an extended period of time."


Technology Contributes to Wage Inequality, but How Much is Uncertain


"There is a debate in the research literature, and indeed, among committee members, about how much of the increase in inequality should be attributed to technology. There are three prominent narratives implicating technological change as a force toward greater inequality over the last several decades. First, many new technologies have replaced labor-intensive, routine, and physical tasks and expanded demand for labor in jobs that require social skills, numeracy, abstract thinking, and flexibility. This shift is often said to be responsible for higher returns to a college education and the widening income gap between skilled and less skilled workers. Second, as labor-intensive tasks are automated, the share of income going to capital relative to labor can increase, which may also help to explain the falling share of labor in overall GDP ... Third, improvements in communication technologies have contributed to what has been termed the “superstar phenomenon” whereby the most successful performers in any occupation can now command a larger share of the global market. This in part reflects their improved ability to sell to not only customers in local markets, but also with greater ease to those in regional, national, and even global markets as improved communications technologies reduce the costs of reaching a broader audience. ...

"It bears repeating that this discussion of technology and inequality should not be read to imply that all aspects of inequality and its recent increase in much of the Western world can simply be attributed to technological change: one must also consider the role played by the demise of unions, concessions on wages and job structures, the offshoring of work to places with lower wage rates, tax policy, and the increasing contribution played by financial investments in the accumulation of wealth. Indeed, increasing inequality in the United States has a political dimension, a phenomenon that is, of course, not new."


Technology is Altering the Nature of Work and Career Relationships


"IT is enabling new work relationships, including a new form of on-demand employment. Although current digital platforms for on-demand work directly involve less than 1 percent of the workforce, they display significant growth potential. Many employers are increasingly viewing their relationship with employees as a short-term commitment rather than a lifelong investment. As Manpower Group CEO Jonas Prising recently put it, `Employers have gone from being builders of talent to consumers of work.'"

Posted by Timothy Taylor at 9:16 AM