Rising Job Tenure and Its Tradeoffs

Given the tumultuous changes in the US economy in recent years, I would have guessed that average "job tenure"--that is, the average time that someone with a job has held that job--was declining. My guess would have been wrong. Henry R. Hyatt and James R. Spletzer present the evidence that job tenure has been mostly on the increase since about 2000 in "Shifting Job Tenure Distribution" (U.S. Census Bureau, Center for Economic Studies, May 2016, CES 16-12R). For example, they write:


"According to published statistics from the Current Population Survey (CPS), the proportion of workers with five or more years of tenure on their main job has increased from 44% to 51% from 1998 to 2014, and the proportion of workers with one year or less of tenure on their main job has decreased from 28% to 21%. We document a similar shift in the job tenure distribution for the years 1998 to 2013 using LEHD [Longitudinal Employer-Household Dynamics] microdata, which is nearly identical to the CPS tenure distribution once differences between these source data are accounted for." 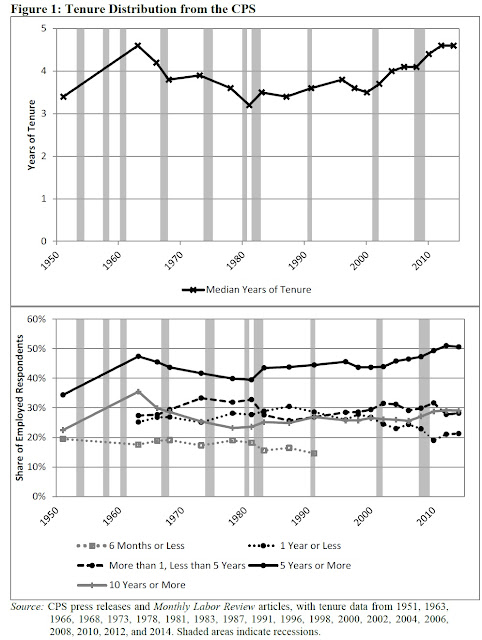 Here's a figure based on the Longitudinal Employer-Household Dynamics data, which is a database in which state governments send administrative records about who works where to the US Census Bureau, which combines them in a way that preserves anonymity for workers and employers. The database covers 95% of private sector jobs. Again, you can see the rise in the share of jobs held for more than five years. 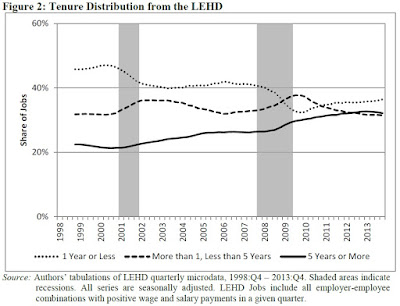 What's going on behind these numbers? Hyatt and Spletzer forthrightly answer: "While there is ample evidence that the labor market is shifting toward more stable jobs, the causes and consequences of declining dynamics and increasing stability remain unknown." But they do massage the data in way that offers some clues. For example, they note that older workers tend to have stayed at their jobs longer, and the US workforce is getting older. So they ask: To what extent does the rise in job tenure just reflect an older workforce? Or they note that the US economy has been experiencing a slowdown in the start-up rate of new companies for about 20 years now, so more workers are with older firms. Again, to what extent does the rise in job tenure reflect the the fact that US firms are older?

The answers to these questions vary with whether they are using Census or LEHD data, but in rough terms, the older workforce can explain about one-third of the rise in job tenure and the growing age of firms can explain about one-sixth of the change, but about half of the rise in job tenure is not explained by the factors they are able to consider.

There is a knee-jerk temptation to feel as if longer job tenure is likely to be a good thing--more stability for workers. But there are tradeoffs.

1) To the extent that longer job tenure is being driven by fewer start-ups and a smaller share of the US workforce being employed at new firms, it is clearly a mixed blessing.

2)The US labor market "churns," as economists sometimes say. There are always millions of people separating from jobs and being hired for new jobs. In good times, the new jobs outnumber the separations; in bad times, it's the reverse. But along with the lower rate of start-up companies, the US labor market has been less showing less churn in the last 15-20 years. Both rates of hiring and of separation rates dropped off for the first decade of the 2000s, although they have rebounded a bit since then. Of course, some of the reason that job separation rates fell around 2007 is that, in a weak economy, workers have a greater tendency to hold on to the job they've got. In addition, jobs where someone has just been hired are on average shorter-term, and so the drop in the hiring rate seems linked to longer job tenure. But of course, a less flexible job market with lower hiring rates is a mixed blessing, too. 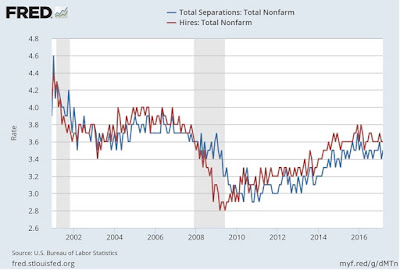 3) The job tenure calculations are based on workers with jobs. Thus, a worker who is unemployed for  a time and then returns to the workforce in a new job will tend to reduce job tenure. But there has also been a decline in the US labor force participation rate--that is, a greater number of adults who don't have jobs and aren't looking for a job. I suspect that if some of of these people had stayed in the labor force, they might have been more likely to be moving in and out of various jobs, which would have pulled down the average job tenure.

4) One benefit of longer job tenure is that workers develop experience and skills which make them a good "match" for their employers, and thus enable them to get wage increases. But at least in the last 10 years or so, "The increase in average real earnings since 2007 is less than what would be predicted by the shift toward longer-tenure jobs because of declines in tenure-held-constant real earnings. Regression estimates of the returns to job tenure provide no evidence that the shift in the job tenure distribution is being driven by better matches between workers and employers." Of course, earnings after about 2007 are sharply affected by the Great Recession.

But overall, the picture that emerges is that job tenure rates aren't up because of workers who are more productively  matched to stable jobs. Instead, job tenure rates are up from a combination of a less dynamic economy and a less fluid labor market, combined with a Great Recession that caused more workers to cling to the job they had.