Snapshots of Merger and Acquisition Activity

Here's a figure showing seven waves of corporate mergers in the US since the 1851, according to the Institute for Mergers, Acquisitions & Alliances (a not-for-profit think tank that does research and workshops, and runs an educational certificate program, with main offices in New York, Vienna, Zurich, and Ho Chi Minh City). As the figure shows, the first three waves of merges have substantial periods of time between them. The most recent four waves are all since 1985. 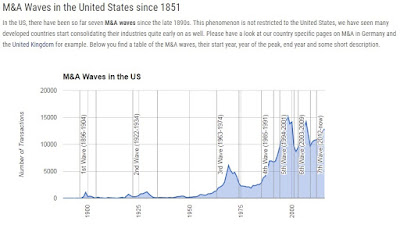 Looking more closely at recent years, here is some additional information on these patterns. In this figure, the blue bars (and the left-hand axis) show the number of announced deals in each year, while the red line (and right axis) show the total value of the deals. For example, the number of deals rose from 2011 to 2014, but not all that sharply, while the value of the deals jumped considerably. I 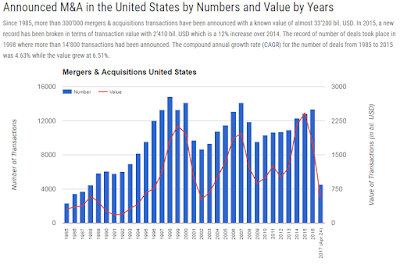 In both this figure, and the one above, the "wave" of mergers in the 1980s doesn't look to me so much like a separate wave, but rather just a time of transition to the higher levels of mergers that would follow. In addition, from a longer historical perspective, it looks more as if the US economy has entered  period since the 1990s when mergers are generally at high levels--although sometimes higher than others.

For another perspectives, here is the number and value of mergers and acquisitions on a worldwide basis since 1985, which again shows either three "waves" or just a generally higher level of mergers since the late 1990s, depending on how you interpret it. 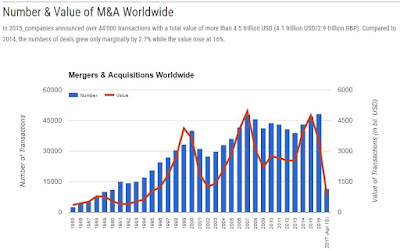 Of course, patterns like these don't prove anything by themselves, and I try not to be someone who over-extrapolates. But I'll just say that these merger and acquisition patterns are certainly consistent with a vision of the US and the global economy in which large companies seem relatively more focused on spending their funds and their managerial time on financial maneuvers that allow them to reduce their exposure to market pressures (either by combining with direct competitors or combining with firms along the supply chain), and thus relatively less focused on seeking to improve their competitive position by internal investments in capital, skills, and innovation.
Posted by Timothy Taylor at 10:16 AM