The State of Global Financial Integration

Before the Great Recession, cross-border financial assets were on the rise. Since then, the overall rise in cross-border assets has leveled off and the pattern of cross-border assets has shifted somewhat from international debt  to foreign direct investment--and also by the rise of global "financial centers." Philip R. Lane and Gian Maria Milesi-Ferretti lay out the patterns in "International Financial Integration in the Aftermath of the Global Financial Crisis," which appears as IMF working paper WP/17/115 (May 10, 2017). They summarize:

"In particular, we have shown how the very fast growth in cross-border positions in relation to global GDP has come to a halt since the financial crisis, reflecting both a retrenchment of cross-border banking activity and the increased weight of less-financially-integrated emerging and developing economies in global GDP. Across country groups, we have documented the disproportionate role played by financial centers—both small offshore centers and a few larger advanced economies—in total holdings, as well as the growing but still relatively modest role played by emerging and developing economies. Across financial instruments we have shown how the retrenchment in cross-border banking activity and the much more modest increase in portfolio positions relative to pre-crisis trends has been offset by rapidly increasing FDI [foreign direct investment] positions. These have reflected to an important extent claims on and from financial centers, where pass-through financial vehicles as well as the shifting domiciles of multinationals have played a crucial role."

Here's an illustrative figure of global financial external assets and liabilities. The height of the bars shows the rise up to 2007, and the leveling out since then. The colors of the bars show three categories, the fairly familiar categories of advances and emerging/developing countries, and the perhaps less familiar category of "financial centers," which in this paper includes "advanced economies with sizable financial center activity (Belgium; Hong Kong S.A.R.; Ireland; Luxembourg; Netherlands; Singapore; Switzerland; and the United Kingdom), emerging economies with similar characteristics (Mauritius and Panama) as well as small financial centers (such as Bermuda and the
Cayman Islands)." The authors note of these financial centers that "as of 2007, these accounted for close to 10 percent of world GDP but over 43 percent of global financial assets. By 2015, their share in world GDP had declined to 8 percent, but their global share of external assets remained around 43 percent." 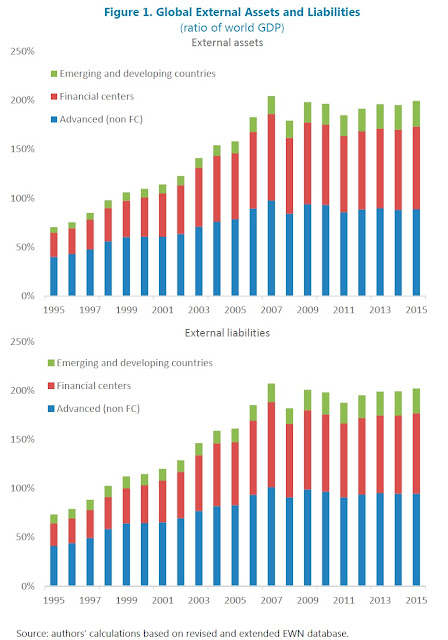 When the authors look at these international asset holdings in more depth, holdings related to international banking and overall do debt are falling in recent years, but the level of asset holdings related foreign direct investment is rising. In turn, this offsetting rise in FDI seems to be driven in substantial part by activities occurring through the financial centers.  They write:

We also document how cross-border FDI positions have continued to expand, unlike positions in portfolio instruments and other investment. This increase is primarily explained by FDI positions vis-à-vis financial centers, which include an important role for so-called special purpose vehicles. This suggests that the increased complexity of the corporate structure of large multinational corporations is playing an important role in this respect. ...

While most of the larger financial centers have important multinational corporations with
extensive cross-border activities, other factors play an important role in explaining both the size and composition of FDI claims and liabilities as well as their dynamics.

The first is the growing importance of Special Purpose Entities. These are legal entities with “little or no employment; or operations, or physical presence in the jurisdiction in which they are created by their parent enterprises which are typically located in other jurisdictions (economies)” (OECD, 2008). Such vehicles are used to raise capital or hold assets/liabilities and generally perform no production activities. Statistics on the relative importance of SPEs in total FDI are only available for a limited set of countries. Helpfully, those include the Netherlands and Luxembourg, which are the countries with the largest stocks of FDI claims and liabilities after the United States. The vast majority of their FDI claims and liabilities (over ¾ for the Netherlands and over 90 percent for Luxembourg) are indeed SPEs. Total FDI claims by SPEs for just these two countries have grown by over $3.5 trillion between 2007 and 2014—over ¼ of the increase in the stock of global FDI claims during the same period.

The second factor is the increased tendency of multinational companies to move their
domicile to a financial center. To the extent that the company is moving from a country
where it has larger production facilities than in the financial center this will generally
increase the stock of global FDI (think for instance of a U.S. pharmaceutical company with important local production facilities moving its headquarters to Ireland). In that case, global FDI would increase by the value of the U.S. production facilities minus the value of any facility previously located in Ireland. Indeed, the stock of FDI claims overseas by Ireland has increased by $600 billion between 2007 and 2014, and by that date it is over 5 times Irish GDP. The counterpart to an increase in FDI assets in the countries hosting re-domiciled firms is a matching increase in foreign portfolio equity liabilities, given that the underlying shareholders of the entities remain the same.

My own interpretation of these patterns is that the kind of foreign direct investment which involves a company taking real management interest in running a firm elsewhere, and which often involves transfers of skill and technology, may well be in decline. However, the kind of foreign direct investment that involves setting up foreign headquarters and foreign financial vehicles as a way of pushing back against tax and regulatory issues is on the rise.

Posted by Timothy Taylor at 9:45 AM