When a state or local government offers a tax incentive to a business for locating or expanding in its jurisdiction, cross-cutting motives are at work. For the business, it's a chance to get a tax break--maybe for a business decision that would have happened anyway. For the government, it's a chance to show that it's "doing something" to help the economy and to claim credit for the location or growth of certain businesses--even if those are business decisions that would have happened anyway. The issue of the extent to which tax incentives actually alter business decisions or help a local economy overall is difficult to sort out, but for any social scientist, the starting point is to have some actual data.

Timothy J. Bartik has compiled "A New Panel Database on Business Incentives for Economic Development Offered by State and Local Governments in the United States" (Upjohn Institute, February 2017). For a short overview of this work, see Bartik's article "Better Incentives Data Can Inform both Research and Policy" in the Upjohn Institute Employment Research newsletter for April 2017. As Bartik writes in the newsletter:


"Using data from 1990 to 2015, the “Panel Database on Incentives and Taxes” estimates marginal business taxes and business incentives for 45 industries in 33 states; the industries compose 91 percent of U.S. labor compensation, and the states produce over 92 percent of U.S. economic output. The database has data for a new facility starting up in each of 26 “start years.” Compared to prior studies, the new database provides more incentive details, such as how incentives are broken down by different incentive types (e.g., job creation tax credits vs. property tax abatements), and the time pattern by which incentives are paid out over a facility’s life cycle."

For example, are state and local tax incentives for business rising or falling in the last 25 years? Here's a figure. Here's a time trend in business incentives, expressed as a percentage of the gross stat and local taxes paid by business. Clearly, the level is dramatically higher than 25 years ago. Bartik notes that a big reason for the jump around the year 2000 is the expansion of the "Empire Zone" incentives in New York. 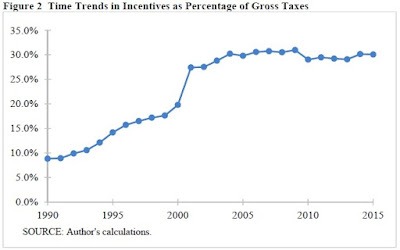 Of course, this overall increase conceals differences across states.

"From 2001 to 2007, big increases in incentives occurred in New Mexico, Missouri, Indiana, North Carolina, Nebraska, and Texas. This includes some Southern and Midwest states plus the Great Plains state of Nebraska and the southwestern state of New Mexico. Over this same time period, New York significantly reduced incentives, from 5.79 percent to 5.20 percent, although New York incentives remained high. From 2007 to 2015, big incentive increases occurred in Tennessee, New Jersey, Wisconsin, Minnesota, Colorado, Oregon, and Arizona. What is noteworthy here is that some states that previously had very low incentives, such as Tennessee, Wisconsin, Minnesota, Colorado, and Oregon, began to use incentives at a much higher level. But over this same time period, big decreases in incentives occurred in New York, Michigan, and Missouri. The big decreases in New York were due to the demise of the Empire Zone program. In Michigan, Governor Rick Snyder jettisoned the expensive MEGA incentive program as part of a policy package that rolled back general business taxes. The Missouri decrease is due to the Quality Jobs program (a JCTC) being replaced with a less costly job creation tax credit, Missouri Works."

Here's the issue with front-loading incentives. A business thinking about making a location or an expansion decision is focused on the relatively short-term. Bartik cites an estimate that businesses often discount revenues earned off in the future by about 12% per year. As a result, a tax break that is 10 or 20 years in the future decisions has relatively little effect on their decision. However, for the government, that tax break is very likely to end up being cashed in--at least if the business continues over that time.

Thus, if a state or local tax incentive is spread over a long period of time, the government is effectively offering something of real cost (the tax break), which doesn't affect the business decision all that much. If business incentives are to be offered at all, it makes more sense to front-load them. The figure shows the pattern of tax incentives over tine in Oregon (black line), which heavily front-loads incentives, and in Tennessee (green line), which doesn't front-load much. The blue line shows the overall pattern in the data in 2000, and the red line shows the data pattern for 2015--showing that front-loading has become just a little more common in the last 15 years. 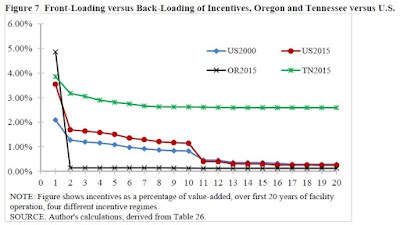 Bartik writes: "As of 2015, in the average U.S. state, incentives are substantially front-loaded. This front-loading has increased over time, but front-loading is arguably not as great as it should be. And some states tend to provide very long-term incentives that probably do not have large payoffs in swaying business location decisions."

What about the form in which incentives are given? The data from the survey reveals:

"Over time, how has the use of different incentive types changed? ... [A]veraged across all states by far the biggest change is that JCTCs have gone from virtually nothing in 1990 to 45 percent of all incentives today, or from 0.01 percent of value-added to 0.64 percent of value-added. Of the 0.96 percentage point increase in overall incentives from 1990 to 2015 (from 0.46 percent to 1.42 percent), about 0.63 percent is due to increased JCTC usage, or about two-thirds of the total incentive increase. ...

Which approach is most likely to be effective? Bartik is suitably cautious here, and careful to label various results as preliminary. But he does write in the newsletter (citations omitted):

What about the hardest question of all--that is, in how many cases does the incentive actually alter the choice a business makes, rather than just adding a little gravy to the choice that would have been made anyway? Appropriately hedged, Bartik writes:

The database suggests incentive effects toward the low end of prior estimates: the average incentive package, 1.4 percent of value-added, might tip the location decision of 6 percent of incented businesses— the other 94 percent of the time, the state would have experienced similar growth without the incentive. This typical 6 percent tip rate of incentives is a low batting average. To have benefits greater than costs, incentives must do something special— they either need unusually high benefits per job created, or incentive designs must exceed the typical batting average, lowering costs per job created. ...

Although the rate of growth of incentives has slowed down, it is still more likely that states will significantly increase rather than decrease incentives. New states have entered more vigorously into the incentive competition. Incentives are still far too broadly provided to many firms that do not pay high wages, do not provide many jobs, and are unlikely to have research spinoffs. Too many incentives excessively sacrifice the long-term tax base of state and local economies. Too many incentives are refundable and without real budget limits. States devote relatively few resources to incentives that are services, such as customized job training. Based on past research, such services may be more cost-effective than cash in encouraging local job growth.

So if your state or local government is considering incentive, the first step is to think  a second, and then a third time, and perhaps even a fourth time about whether it actually makes sense. If the decision is to proceed, then the discussion should move to issues of design: for example, a front-loaded payment that supports customized training for a high tech firm that has a good chance of  generating local spinoffs has a better chance of being a good deal for the taxpayers and the local economy than a 20 year tax break.
Posted by Timothy Taylor at 8:31 AM