The Economics of the 'Stans

The semi-official name for the region is "Central Asia," but I confess that I usually think of it as "the 'Stans"--that is, Kazakhstan, Kyrgyzstan, Tajikistan, Turkmenistan and Uzbekistan. These countries have now been independent of the former Soviet Union for 25 years. Taken together, they have nearly 70 million people, comparable to the population of the United Kingdom or France. As someone who is driven by curiosity and guilt, it bothers me that I do not know more about this region. Thus, I was delighted to find that  Uuriintuya Batsaikhan and Marek Dabrowski have written a primer on the economics of this area, "Central Asia at 25" (Bruegel Policy Contribution #13, May 2017).

From a broad-brush perspective, some of the economic experience of this region looks similar to other "transition economies" that separated from the Soviet Union: that is, they first experienced several years of severe recession and hyperinflation, but then adjusted and have performed somewhat better. For illustration, here's a graph showing growth rates for these five economies in the last 25 years. 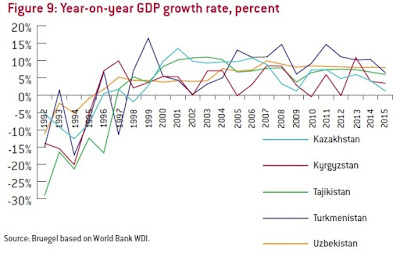 And here's a figure showing inflation rates over that time. Notice that the left-hand axis measures inflation on a logarithmic scale, so the upper numbers on the left-hand side represent inflation in the range of several hundred percent per years. 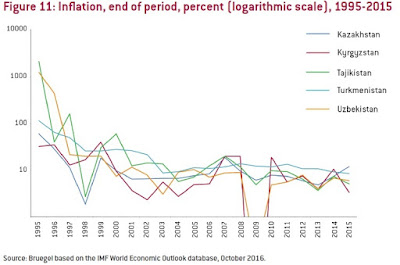 The economic and political legacy of these countries as they gained autonomy from the Soviet Union also has some similarities. Batsaikhan and Dabrowski write:


Similarly to other parts of the Soviet Union, agriculture was forcibly collectivised in the early 1930s. The human costs of the Soviet modernisation of Central Asia were enormous. They included several rounds of famine in the 1920s and 1930s, repression and terror in the 1930s, the building of a large network of labour camps (the so-called Gulag system) where political opponents from the entire Soviet Union were imprisoned and where they perished in large numbers, and mass-scale resettlements (ssylka in Russian) of populations from the European part of the Soviet Union. The latter affected social groups such as the kulaks (better-off farmers) and included the deportation of entire ethnic groups in the 1940s, including Volga Germans, Chechens, Ingush, Crimean Tatars, Crimean and Caucasian Greeks, Meskhetian Turks, Koreans, Karachays and Poles.
After the death of Stalin in 1953 and the partial dismantling of the Gulag system, the Soviet-type forcible modernisation and industrialisation continued but with the use of less coercive methods. These included the conversion of pastures (‘virgin land’ or tselina in Russian) in northern Kazakhstan into large-scale wheat farms, the building of the Main Turkmen and Karakum canals, and the operation of the Semipalatinsk Nuclear Test Site and the Baikonur Cosmodrome (both in Kazakhstan). Many of those projects caused severe environmental damage (such as the disappearance of the Aral Sea and radioactive pollution over large areas of Kazakhstan), which have not been overcome yet. ...
The rapid and forcible industrialisation of the Soviet era (with a strong focus on military needs) was associated with huge structural distortions and microeconomic ineffectiveness. After the dissolution of the Soviet Union, many industrial enterprises in Central Asia lost their previous markets and were unable to compete under the new market conditions. Partial de-industrialisation in the post-Soviet period was thus no surprise. After a painful transition period, growth picked up in 2000s, largely driven by growing exports of commodities such as oil and natural gas (Kazakhstan, Turkmenistan and Uzbekistan), aluminium (Tajikistan), gold (Kyrgyzstan), cotton (Tajikistan and Uzbekistan) and other metals (Kazakhstan).

Although the nations of Central Asia have some similarity in their economic challenges, there are notable differences, too. At the simplest level, they vary considerably in population: "Uzbekistan is the most populous country with 31.3 million people, followed by Kazakhstan, 17.5 million, Kyrgyzstan, 6 million, Tajikistan, 8.5 million and the least populated Turkmenistan, 5.4 million."

Moreover, the standard of living in these countries varies considerably. The figure shows GDP per capita since independence. The solid lines are the five countries of Central Asia: the dashed lines are some nearby comparison economies. The figure shows that Kazakhstan and Turkmenistan have seen substantial economic growth in the last couple of decades, while Kyrgyzstan, Tajikistan, and Uzbekistan have not. 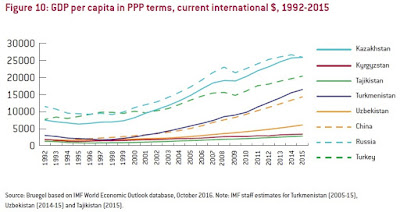 Geopolitically, these countries sit between Russia and China. (To help remain oriented, the three countries to the west of the Caspian Sea, unlabelled on this map, are on map, are Georgia, Armenia, and Azerbaijan.) 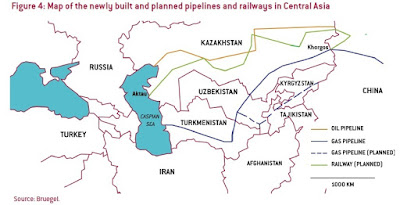 As the map illustrates, "the region is distant from the major centres of world economic activity: North America, Western Europe, East and South East Asia. ... [A]ll countries are landlocked (Kazakhstan is the largest landlocked country in the world and Uzbekistan is double landlocked, ie it borders only landlocked countries) with limited transportation connections inside and outside the region."

(Trivia question: Other than Uzbekistan, onlyy one other country is double-landlocked. It's Liechtenstein, sitting between Switzerland and Austria).

The map also shows the main energy and transportation infrastructure that is being built across the region, much of which connects the region with China. Here's a figure showing trade with China and Russia: both are up a lot in the last 15 years or so, but trade with China seems to be taking the lead. As one example:  "Turkmenistan’s exports to China constituted 1 percent of its total exports in 2009, increasing to almost 80 percent by 2015, almost all of which is natural gas; Turkmenistan’s second largest trading partner, Turkey, takes only 5 percent of its total exports." 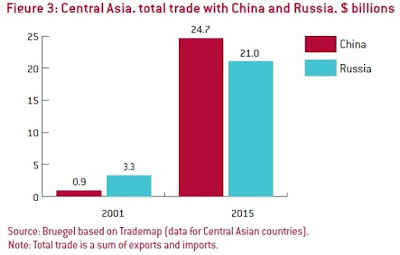 But while trade with China has been on the rise, and the infrastructure projects will likely keep it on the rise, the three lagging economies of the region are especially dependent on remittances from workers who have taken jobs abroad. Most of these jobs are in Russia, presumably because of the long-standing historical ties, but other substantial destinations for migrant workers from this region include Turkey and relatively well-off Kazakhstan. 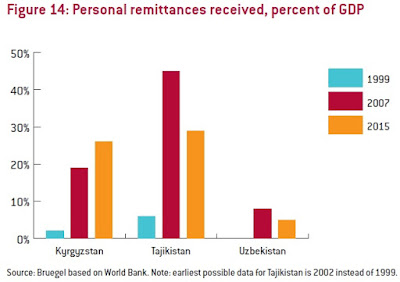 Overall, what does the reform agenda look like in Central Asia?


All Central Asian countries are doing poorly in the areas of governance and enterprise restructuring and competition policy, pointing to their limited progress in more complex institutional and legal reforms.  ... Corruption remains a major problem in the region, particularly in Turkmenistan and Uzbekistan .... The largely authoritarian character of the political systems in Central Asia is the main cause of their poor governance and business climate, and their insecure property rights and rule-of-law deficit. According to the Freedom House Freedom in the World 2017 report, only Kyrgyzstan is rated as ‘partly free’, while the others are ‘not free’. Uzbekistan and Turkmenistan belong to the group of the 10 most politically oppressive countries in the world, alongside North Korea and Eritrea. ...

On the other hand, all Central Asian countries, Kazakhstan and Kyrgyzstan where reforms are more advanced, face the same challenges of oppressive and predatory post-Soviet states. These are deeply rooted corruption, rent seeking, state capture, administrative harassment of business and more broadly, a high degree of business uncertainty and insecurity over property rights. The situation looks particularly bad in all areas where economic management interacts with authoritarian political systems and legal institutions, especially those related to the judiciary, law enforcement agencies and public administration. ... Closer intra-regional cooperation would also improve the business and investment climate. Given the region’s remote geographical location, its complicated borders, infrastructure inherited from Soviet times and cultural proximity, unrestricted movement of goods, services, people and capital between Central Asian countries would greatly contribute to their economic development. Closer cooperation would also help Central Asian countries to jointly promote their interests vis à vis those of their major neighbours.