The way to have a higher sustainable catch of fish, long-term, is to have a lower catch of fish, short-term. This insight isn't all that paradoxical or surprising. Fisheries are a standard example for economists of what can go wrong when property rights are not clear. If the level of fishing is low, then the resource can replenish itself naturally, and specific rules or property rights are not needed. But when the level of fishing becomes high enough that the resource cannot replenish itself, each individual fishing-boat retains an incentive to keep going out there and getting what it can--after all, if one boat doesn't, another boat will. The predictable results is that the fishery becomes depleted.

As they point out, the last quarter-century or so has seen dramatically more effort to catch fish, with the actual catch stagnant or declining. They write of a "long-term decline in fish stocks, stagnant or even slightly declining catches since the early 1990s, and an increase in the level of fishing by a factor of as much as four. The productivity of global fisheries decreased tremendously, as evidenced by the fact that catches did not increase nearly as rapidly as the global level of effort (apparent in a doubling of the size of the global fleet and a tripling of the number of fishers)."

Here's a figure summarizing the extent to which fisheries around the world are underfished, fully fished, or overfished. 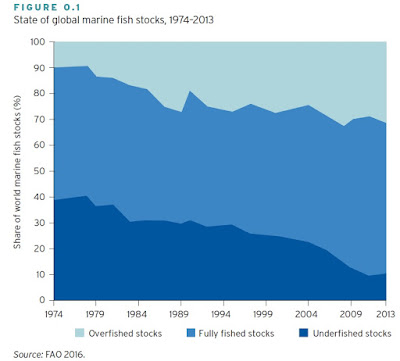 The report is largely a discussion of a model of global fisheries and what it would take to rebuild them. The authors write:

Severely overexploited fish stocks have to be rebuilt over time if the optimal equilibrium is to be reached and the sunken billions recovered. To allow biological processes to reverse the decline in fish stocks, fishing mortality needs to be reduced, which can only happen through an absolute reduction in the global fishing effort (as captured by the size and efficiency of the global fleet, usually measured in terms of the number of vessels, vessel tonnage, engine power, vessel length, gear, fishing methods, and technical efficiency). Reducing the fishing effort in the short term would represent an investment in increased fishing harvests in the longer term. Allowing natural biological processes to reverse the decline in fish stocks would likely lead to the following economic benefits:

This study looks at two hypothetical pathways that would allow fish stocks to recover. At one extreme, if the fishing effort were reduced to zero for the first several years and then held at an optimal level, global stocks could quickly recover to over 600 million tons in 5 years and then taper off toward an ideal level. Reducing the global fishing effort by 5 percent a year for 10 years would allow global stocks to reach this ideal level in about 30 years ...

This report makes a very clear case for the need for reform. It does not analyze policies, financing, or the socioeconomic impacts of embarking on such reform. Many case studies have shown that different strategies are called for in different circumstances. Whichever strategies are chosen, fishing capacity will have to be reduced, jeopardizing the livelihoods of millions of fishers. Financing will be needed to fund the development of alternatives for them, to provide technical assistance at all levels, and to conduct additional research on ecosystem changes and related ecological processes.

Later in the paper, they do offer a quick discussion of some policy issues. One minimal step would be to cut back on the policies that subsidize fishing.


However, global subsidies are significant: some recent studies estimate global fisheries subsidies at US$35 billion a year, around US$20 billion of which are provided in forms that tend to further increase fishing  capacity. This subsidy level is equivalent to as much as one-third of the value of global fisheries production.

Most fisheries are in national waters, and thus the rules are ultimately set and enforced by nations. I've discussed in the past "Saving Global Fisheries Through Property Rights" (April 12, 2016). Such rights can be created through "catch shares" for individuals or through some form of community-based management. Either way, the challenge is to have someone managing fisheries for the long run--which in many places, means reducing the current catch.
Posted by Timothy Taylor at 9:00 AM