Japan: The Challenges of Aging, Slow Growth, and Government Debt

Japan is the third-largest economy in the world, behind the US and China. It'e experience seems to foretell some of the key issues facing other high-income economies, like slow productivity growth, rapid aging, and rising government deficits. But in the last few years, it also seems to have recovered to at least a moderate rate of economic growth. What are some of the main patterns and lessons in Japan?  For background, I'll draw on the work of theOECD, which just published one of its "Economic Surveys" of Japan in April 2019.

Back in the 1980s, a number of popular books and reports published in the US anointed Japan as the future leader of the global economy. A standard claim was that the disorganized competitive market forces of the US economy were unable to keep up with the government-directed cooperative ventures of Japan's economy. Then in the early 1990s, Japan's economy experienced a meltdown in stock and housing prices, and its economy entered a period of near-zero growth. Here's figure comparing Japan's in per capita terms to the rest of the OECD countries.  The left-hand set of bars show that when it comes to per capita output, Japan's growth was lagging well behind and is now catching up. The right-hand set of bars show how this pattern is linked to an aging population. If one looks only at Japan's output relative to its working-age population, it wasn't all that far behind from 1997-2012, and has actually been ahead of average OECD growth since 2012. 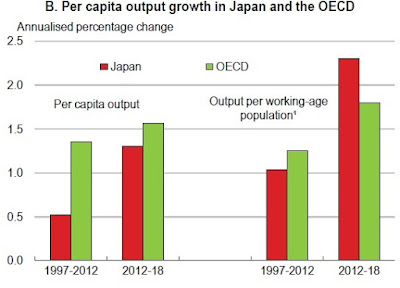 Japan's is facing a situation of a declining population and workforce, and the share of the population that is elderly is on the rise. This rising share of elderly has been driving up government spending on pensions and health care, and together with attempts to stimulate its economy through government spending (much of it on infrastructure), Japan has run up an enormous government debt. In the last few years, it has been aggressively using the Bank of Japan to buy and hold its government debt. Meanwhile, productivity growth has been stagnant. Let's say just a bit more about these patterns.

Here's a figure showing Japan's total population, broken down by age group. The OECD writes: "With Japan’s population projected to fall by one-fifth to around 100 million by 2050, many parts of the country are facing depopulation. Efficiency would be increased by expanding the joint provision of local public services, including health and long-term care and infrastructure, across jurisdictions and developing compact cities." 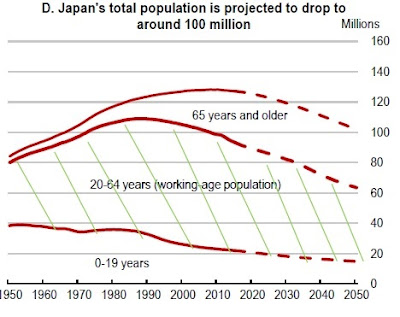 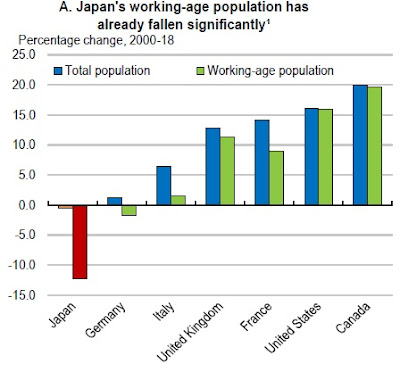 The combination of slow growth and a declining population has meant ongoing declines in the price of real estate in Japan for most of the last three decades, before stabilizing in the last few years. 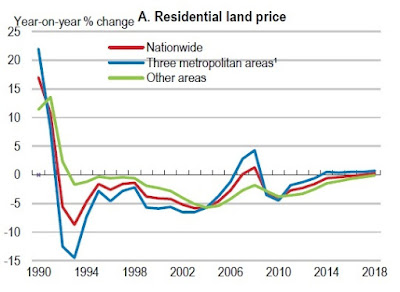 Here's a figure showing Japan's population age 65 and older as a share of the working-age population aged 20-64. The bar shows the level in 2017; the arrow shows where it's headed by 2050. Many high-income countries are getting older, but Japan is an extreme case. The OECD writes: "Half of the children born in Japan in 2007 are expected to live to the age of 107, which has major implications for the labour market. The number of elderly is projected to rise from 50% of the working-age population in 2015 to 79% by 2050 ..." 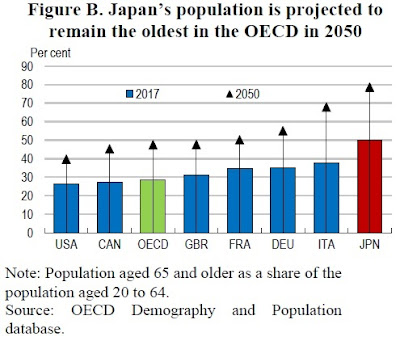 Supporting the elderly and attempting to stimulate the economy has led to very high levels of government debt in Japan. The OECD writes: "Twenty-seven consecutive years of budget deficits have driven gross government debt to 226% of GDP in 2018, the highest ever recorded in the OECD area. The government projects that population ageing will boost spending on health and long-term care by 4.7% of GDP by 2060. Measures to ensure the sustainability of Japan’s social insurance programmes, as spending rises and the number of working-age persons falls from 2.0 per elderly to 1.3 by 2050, is a priority." 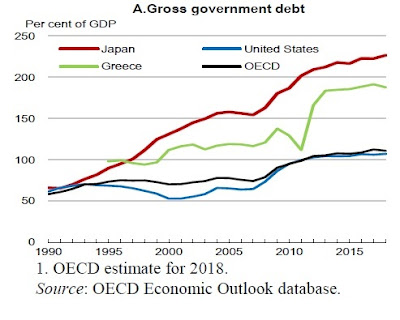 Japan has traditionally had a high savings rate, and in the past, the common pattern was that Japan's government debt was mostly funded by the high savings levels of its citizens. However, in the last few years the Bank of Japan has become much more aggressive that other countries in its "quantitative easing," where the central bank essentially prints money to buy government debt. 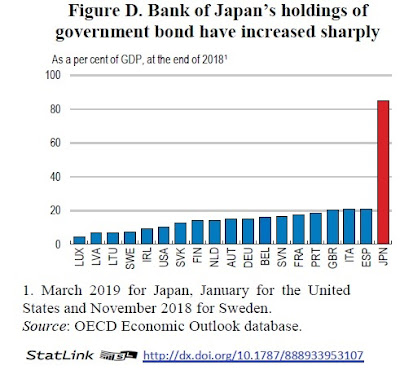 All of this is happening against a backdrop of relatively low labor productivity in Japan. This figure compares Japan to countries in the upper half of the OECD nations--that is, those countries that have higher income levels. A common pattern in Japan is that the labor input in Japan is higher than the comparison group, because labor force participation and hours worked in Japan are high. However, the productivity of labor in Japan has been well below the comparison group.  A shrinking labor force and lagging productivity are not a recipe for success. 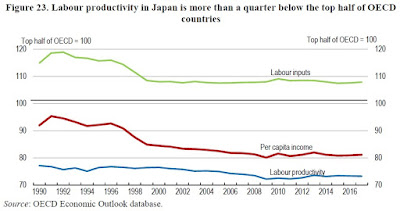 So what needs to be done in Japan? Clearly, a main approach has been to try jump-start the economy with large fiscal deficits and aggressively loose monetary policy. While this seems likely to continue, the OECD warns that it's not a strategy that can be pursued forever. Ultimately, an economy needs to have the output of its workforce expand--and for this to happen in a situation where the number of people in the workforce is falling.

One set of approaches is to get more work from the existing workforce. The OECD notes that as life expectancies head toward 100 years and higher, the traditional patterns of retirement need to change. The report says:

More than 80% of [Japan's] firms continue to set mandatory retirement at age 60, even though life expectancy at that age is 26 years, up from 17 in 1970. While workers can continue until age 65, most are re-hired as non-regular workers at significantly lower wages and in jobs that make less use of their skills. The right of firms to set a mandatory retirement age should be abolished to allow more workers to continue their careers, while fully utilising their skills. An end to mandatory retirement requires shifting away from seniority-based wage systems by giving more weight to job category and performance. In addition, the pension eligibility age should be raised above 65, as healthy life expectancy has reached 75. Lengthening careers in the era of 100-year life spans also requires lifelong learning and job-related training to avoid the decline in skill levels among older workers. An end to mandatory retirement would increase firms’ incentives to increase such investment in older workers, which is currently low in Japan. Finally, longer working lives would also be facilitated by better work-life balance for all workers by strictly enforcing the new 360-hour annual limit on overtime hours, imposing adequate penalties on firms that exceed it and introducing a mandatory minimum period of rest between periods of work.

The share of Japanese women in the labor force has risen in recent years, with a push from expanded child care programs. But Japan has long had a "dual-track" economy, with one set of workers who have regular work, good pay and benefits, and a career path, and a second track of irregular work, low pay, and little chance for advancement. Women in Japan have often ended up in this second track. The OECD writes:

The employment rate for women has risen sharply over the past five years, from 60.7% in 2012 to 69.6% in 2018, well above the 60.1% OECD average (Table 9). However, half of the new workers are non-regular workers. The working lives of women are interrupted and shortened by the burden of providing care for family members, leaving them under-represented in managerial positions and on boards of directors . ... Removing barriers to women requires policies to: i) improve work-life balance by strictly enforcing the new 360-hour annual limit on overtime; ii) further reduce waiting lists for childcare; and iii) attack discrimination, which tends to exclude women from fast-track career
paths. Breaking down labour market dualism is also essential, as women account for two-thirds of non-regular workers, who are paid substantially less.

Of course, pushing back retirement ages and expanding the existing workforce would also help to improve Japan's long-run budget picture. But the OECD report emphasizes that other efforts like cost-sharing in health care, means-testing of benefits for the elderly, and various kinds of cost-cutting will also be needed.

How to get more productivity from Japan's workers? This issue has been the heart of Japan's long-run problems for decades. Of course, Japan's economy has a number of well-known world-class companies at highest level of global competitiveness. But it also lots of small and medium enterprises with much lower productivity. The OECD writes: "Despite a high level of public support for SMEs [small and medium enterprises], productivity in large firms was 2.5 times higher than in SMEs in FY 2017 in manufacturing, a large gap by international standards ..." Japan's service industries lag well behind their international peers in productivity, as well.

Subsidizing small and medium enterprises, as long as they remain small, is not a long-run path to higher productivity. Instead, the dropping Japanese workforce offers a chance for these inefficient firms to be combined, reorganize, managed better, and exposed to greater competition. Many of these companies seem to be in a quirky situation where they complain that they don't have enough capacity to produce--but they aren't taking the steps and making the investments to push for higher productivity of their existing workforce. The OECD report talks a lot about reforms to corporate governance, so that Japan's companies would do less sitting on their piles of cash and more looking for growth and efficiency opportunities. But spreading a more productivity-based mindset across all the companies of Japan, not just the world leaders, isn't an easy task.

Japan has other issues beyond aging, budgets, and productivity. For example, Japan seems likely to bear costs of rising trade disputes involving China and around the world, even if if often isn't directly involved in the complaints. But the success which Japan has in addressing its challenges, for better or for worse, will shape how other high-income countries like the US view similar policy choices in the decades ahead.

For some additional perspective on Japan's economy, Tanweer Akram has written "The Japanese Economy: Stagnation, Recovery, and Challenges," in the Journal of Economic Issues (June 2019, pp. 403-410).
Posted by Timothy Taylor at 11:49 AM