Some Snapshots of the Global Energy Situation

"Global primary energy grew by 2.9% in 2018 – the fastest growth seen since 2010. This occurred despite a backdrop of modest GDP growth and strengthening energy prices. At the same time, carbon emissions from energy use grew by 2.0%, again the fastest expansion for many years, with emissions increasing by around 0.6 gigatonnes. That’s roughly equivalent to the carbon emissions associated with increasing the number of passenger cars on the planet by a third." Spencer Dale offers these and other insights in his introduction to the the 2019 BP Statistical Review of World Energy. It's one of those books of charts and tables I try to check each year just to keep my personal perceptions of economic patterns connected to actual statistics.  Here are a few figures that jumped out at me.

One main drive of the rise in world energy use is economic growth in emerging market countries. The horizontal axis of this figure shows average energy use per person. The vertical axis shows the cumulative share of total world population. The yellow line shows the pattern for 1978, while the green line shows four decades later in 2018. 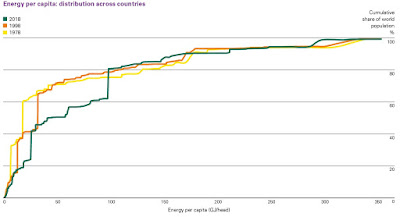 From the caption under the figure: "In 2018, 81% of the global population lived in countries where average energy demand per capita was less than 100 GJ/head, two percentage points more than 20 years ago. However, the share of the global population consuming less than 75 GJ/head declined from 76% in 1998 to 57% last year. Average energy demand per capita in China increased from 17 GJ/head in 1978 to 97 GJ/head in 2018." The figure constructed from national-level data on average energy consumption. Thus, the big jump the blue line at right about 100 GJ/head is the population of China. Overall, the shift from the yellow to the blue line shows how energy consumption is rising in emerging market economies. 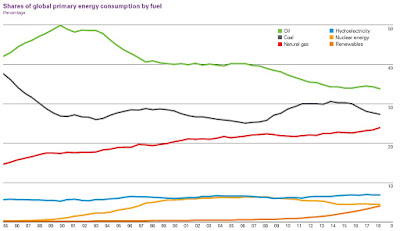 High oil prices, reducing the quantity demanded, are part of the economic picture as to why the share of energy produced by oil has declined. The figure shows oil prices back to the Pennsylvania oil boom of the 1860s, with the light-green line showing prices adjusted for inflation. Oil prices have been volatile since the 1970s, but they seem at present to be rising to the middle of their range over the last 4-5 decades. 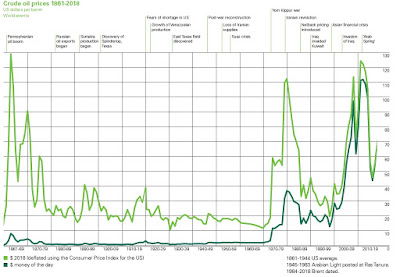 What about renewable energy and carbon emissions? From Spencer Dale's overview:

Renewable energy appears to be coming of age, but to repeat a point I made last year, despite the increasing penetration of renewable power, the fuel mix in the global power system remains depressingly flat, with the shares of both non-fossil fuels (36%) and coal (38%) in 2018 unchanged from their levels 20 years ago. This persistence in the fuel mix highlights a point that the International Energy Agency (IEA) and others have stressed recently; namely that a shift towards greater electrification helps as a pathway to a lower carbon energy system only if it goes hand-in-hand with a decarbonization of the power sector. Electrification without decarbonizing power is of little use. ... On the supply side, the growth in power generation was led by renewable energy, which grew by 14.5%, contributing around a third of the growth; followed by coal (3.0%) and natural gas (3.9%). China continued to lead the way in renewables growth, accounting for 45% of the global growth in renewable power generation, more than the entire OECD combined.

Here's is a figure showing how electricity is generated around the world. Coal still leads the way, by far. Natural gas is on the rise, while oil is dropping. "Renewables," which is led by wind, but also includes solar and smaller categories like geothermal and biomass, is on the rise, but still under 10%. 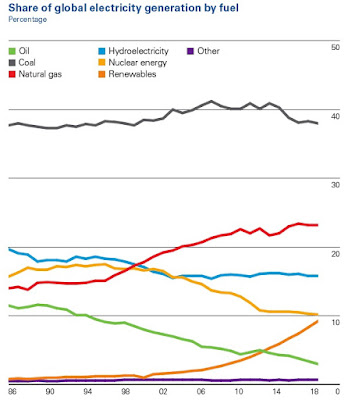 Finally, here's a table showing carbon emissions in 2018. This is a trimmed-down version of a bigger table in the text. It mainly shows carbon emissions by region. (CIS is "Commonwealth of Independent States," which refers to the remnants of what was once the Soviet Union.) Notice that the Asia-Pacific region accounts for half of all global carbon emissions, with China alone accounting for more than one-quarter of global carbon emissions. Also, the average annual growth rate of carbon emissions was negative for North America and for Europe from 2007-2017, but rising during that time frame in Asia Pacific, as well as Africa, the Middle East, and South/Central America. As I've written before, a meaningful approach to limiting or reducing global carbon emissions will need to include North American and Europe, but our participation won't be nearly enough. 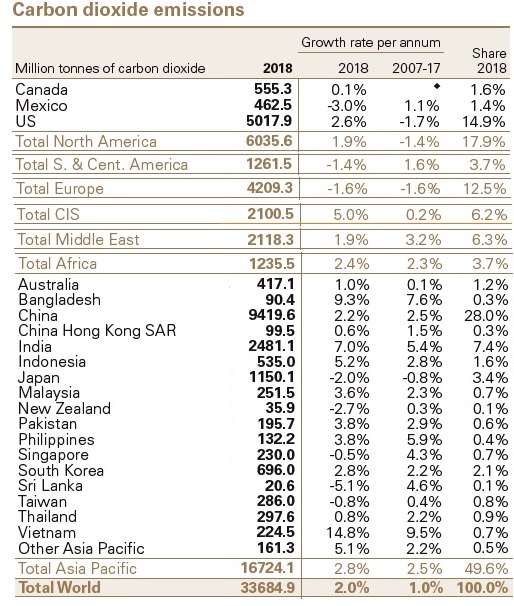