The Global Paper Industry: Still on the Rise

Paper is an old industry, dating back to 100 BC in China. For several decades now, there have been predictions that paper would decline, as businesses converted to the "paperless office" and as people moved to reading online rather than on dead tree. How is that transition going? The short answer is "only OK." For a longer answer, the Environmental Paper Network offers a review in The State of the Global Paper Industry, subtitled "Shifting Seas: New Challenges and Opportunities for Forests, People and the Climate" (April 2018). 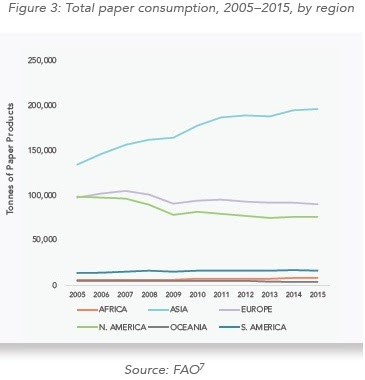 Here's a figure showing per capita consumption of paper, with North America still leading the way. 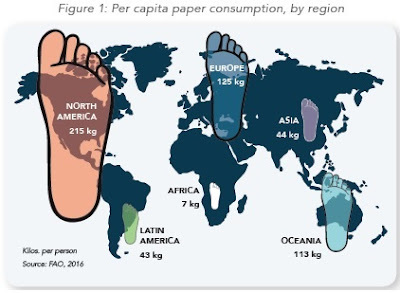 Why has the demise of paper been so slow to arrive? As shown in the table above, one main reason is the growth of paper production in China. The report notes: "China alone, with its rapid build-up of capacity over the past two decades, has taken over as the leading paper producer, providing more than 25% of the world’s paper.The USA, long the global leader in paper production, moved to second place in 2009." This pattern raises the possibility that paper consumption is also likely to rise substantially if and when economic growth proceeds in other parts of the world

The other reason is that most consumption of paper products isn't about newspapers, reports, and other reading material. It's packaging. Here's a pie chart showing the breakdown of uses of paper in a recent year, and a figure showing the change over time. 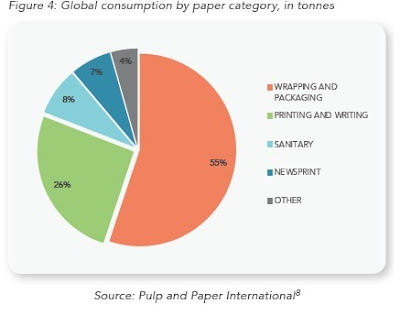 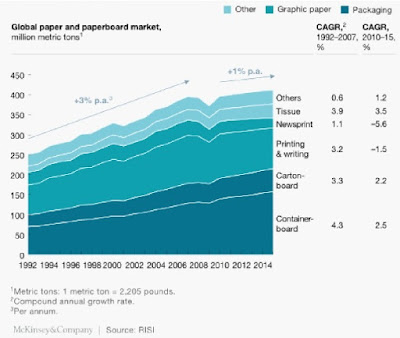 A main concern for the Environmental Paper Network is that paper production is often an environmentally dirty industry. The report notes:

The pulp and paper manufacturing industry is one of the world’s biggest polluters and must evolve to employ best available technologies and new innovations to clean up its act. The sector is not only the fifth largest consumer of energy, accounting for 4% of all the world’s energy use, but the process of paper uses more water to produce one ton of product than perhaps any other industry. On average 10 litres of water are required to make one A4 sheet of paper – in some cases, it’s as high as 20 litres. The chemically intensive nature of the paper pulping and bleaching process is far from clean. The toxic chemicals used often end up being discharged as effluent into waterways where they pollute rivers, harm eco-systems, bio-accumulate and eventually enter the food chain. Besides carbon emissions, pulp and paper mills also release air pollutants in the form of fine particulate matter (PM2.5), nitrogen and sulphur oxides which can also affect public health. While the industry has made some progress in recent years to operate more sustainably, it has been slow to adopt advances in technology that can deliver higher energy savings and water reductions whilst promoting less toxic production methods.

The report is also careful to note that reductions in paper use don't always provide environmental benefits. Using paper towels in a public restroom is probably more environmentally friendly than a hot-air dryer.  Even the move from paper to digital communication can be tricky to convert into environmental pluses and minuses. The report notes: "Life-cycle assessments of some commodities, for example of books, have compared the energy or climate change costs of paper and electronic alternatives, drawing conclusions about how many e-books need to be read on an e-reader before the unit energy costs are less than the paper option. Few of such studies adequately address the full life-cycle impacts of digital devices, including all the minerals used in their production and post-disposal impacts."

Thus, the challenge in thinking about environmental effects of the paper industry is to focus on uses where the social benefits of paper are relatively low. The report uses the economics language of "utility" to discuss this subject, although the term isn't quite used in the textbook economics sense:

Some paper applications have considerable social benefits, and therefore high utility. Other applications have either no social benefits, a highly limited lifespan or much more durable alternatives (or more than one of these). They are therefore deemed to be low utility. In surveys of opinion of the utility of different paper applications, the results have assigned high utility to such items as legal papers, passports, money, medical records, toilet paper and books, and low utility to unread magazines, unwanted direct mail (junk mail), excessive packaging and throwaway cups. Reducing use in paper applications that are high volume and low utility can make a big impact, while not causing disadvantage. Excessive packaging, therefore, is an example of a good place to look for efficiencies. Reducing use of paper napkins, on the other hand, being low utility but also relatively low volume, will make less impact, while reducing the use of books, which are fairly high volume but also high utility, could be unpopular and limit the sharing of information by people that have no access to digital devices.

Measuring overall recycling in an economy is hard, and the statistics aren't great. But here's one set of estimates on the extent of paper recycling.

Paper has its uses, and some of those uses seem likely to persist and even to rise with global economic growth. The challenge, as usual, is to strike a cleaner balance between economic benefits and environmental costs.
Posted by Timothy Taylor at 11:30 AM