Mortality Rate of Children Over the Last Two Millennia

Here's a figure showing the patterns from Max Roser at the "Our World in Data" website (June 11, 2019). Of course, you will need to expand the version here, or go to the other website, to see the details. 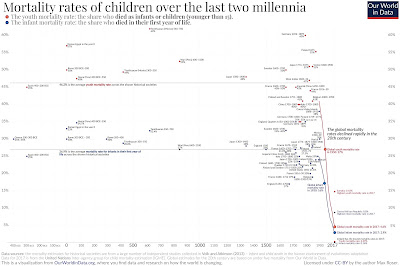 I'll put off all the arguments over reasons why this happened and what it means for public policy for another day. It's Father's Day today, I just want to take a few minutes and marvel at this fundamental change in what it means to be a parent in the 21st century, especially in a high-income country. My children were much less likely to die.
Posted by Timothy Taylor at 10:00 AM