Where US Government Debt is Headed

The Congressional Budget Office has published "The 2019 Long-Term Budget Outlook" (June 2019), which offers a chance for a quick overview of where US government spending, taxes, and debt are headed in the next 30 years. For those who have been paying attention, there are no bombshell revelations here. But for thus just arriving at the party, the patterns may be eye-opening.

Here's a figure showing accumulated federal debt over time as a share of GDP. As you can see, increases in debt in the past have been associated with responses to war and to recession. But on the current path, US debt will surge well beyond the previous high--the debt that was used to finance fighting World War II. And it will do so without any need for a war or a recession to drive spending upward. 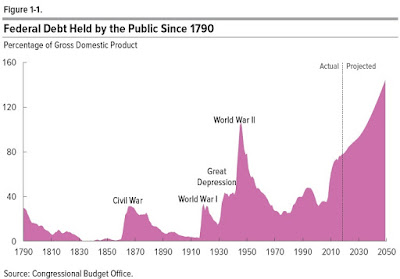 Here's a figure showing the 30-year projections for federal revenue and spending. U For revenues, you can see the drop in tax revenue during the Great Recession, the recovery in tax revenue after the recession, and the effect of the Trump tax cut in 2018. But under current law, federal revenues remain at pretty much the traditional historical level. However, outlays are rising, which leads to higher annual deficits and ultimately to higher debt.

This figure compared federal spending in 2019 and the projections for 2049 to show the change in the two big patterns of higher payments for interest and health care. 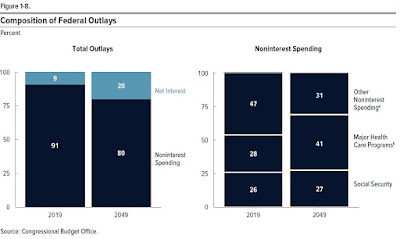 1) Interest payments are already 9% of federal spending. Before just brushing past that number too quickly, it's worth noting that net interest is 1.8% of GDP--call it about $360 billion that the government is spending because of past borrowing, and thus doesn't have available for current spending, tax cuts, or deficit reduction. On the current path, interest spending will be 20% of all federal spending by 2049.

2) The other bar graph compares some main categories of non-interest federal spending in 2019 and 2049. The big change is the rise in the share going to major health care programs, and the corresponding drop in "all other" spending. Of course, this squeeze from  higher health care costs won't just show up in government budgets, but will also be apparent in private-sector payments for health insurance. In both cases, it puts a squeeze on other categories of spending.

3) This is a "current law" projection. It has become standard practice for the federal budget to play games by forecasting that certain spending programs will be cut and certain taxes will rise in the future. But when the actual date of such changes approaches, they are then pushed back a few more years. The CBO also constructs an "alternative fiscal scenario" which doesn't assume that these spending cuts and tax increases scheduled for the future will actually happen. In that scenario, the rise in deficits, health care spending, interest payments, and debt is much larger.

4) Although the changes in the federal budget picture are coming from the spending side, rather than the taxes side, it's not clear that the appropriate policy response should be on the spending side. A big part of the rise in federal spending is on programs for the elderly, like Social Security and Medicare. Medicaid has already become the primary payer for nursing home care. Given that the proportion of elderly people in the US is rising, federal spending will rise for these reasons. Of course, one could react to this change just by cutting all other federal programs, and let the US budget evolve even further away from investments in the future and even more toward cutting checks for pensions and health care. But a gradual rise in taxes to help pay for these programs for the elderly is also a reasonable option. However, the current "plan" of just letting government borrowing rise along with spending on these programs is not a sensible long-run option.

5) If the federal government could make real but moderate changes in the near-term, it could get its borrowing on a different path. The cumulative result of lower borrowing, year after year, would be reduced interest payments in the middle- and the long-term. But moving over to that alternative path has proven difficult. Indeed, what was troublesome about the Trump tax cuts was not that they dramatically altered the ongoing path of federal revenues: as the figure above shows, they didn't. The concern was that when the economy is perking along with unemployment rates staying below 4%, it should be a time for deficits to be reduced and the debt/GDP burden to fall at least a little, and that isn't what's happening.

6) Given these budget projections, I'm suspicious of any proposals by politicians for big additional spending programs. First tell me your plan for getting off the current path for federal debt. Then I'm willing to listen to grand new visions.
Posted by Timothy Taylor at 12:17 PM