Some Snapshots of the Economic Well-Being of U.S. Households

For the last six years, the Federal Reserve has been doing an annual Survey of Household Economics and Decisionmaking, which is designed to be nationally representative of the 18-and-older US population. The most recent survey was carried out in October and November 2018, and the Federal Reserve published the result in "Report on the Economic Well-Being of U.S. Households in 2018" in May 2019. Here, I'll offer a few tables from the report that especially caught my eye. What was interesting to me is how the survey answers conveyed both a sense that the US economy is going pretty well, but also that many people felt dissatisfied.

For example, "Three-quarters of adults in 2018 indicate they are either `living comfortably' (34 percent) or `doing okay' financially (41 percent), similar to the rate in 2017. The rest are either `just getting by' (18 percent) or “finding it difficult to get by' (7 percent)." When people are asked how their financial situation compares to their parents at the same age, a majority says "better," with blacks and Hispanics more likely to say "better" than whites. 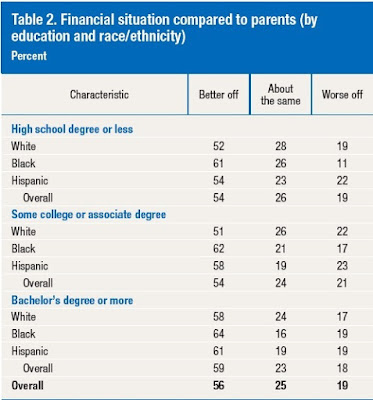 However, even with unemployment rates as low as they have been for a half-century, lots of people would like to work more than they currently are. "Two in 10 adults are working but say they want to work more hours." In other cases, those who are not working may be limited by health, family responsibilities, or an inability to find a suitable job.

It's also plausible that when some people with irregular or temporary jobs are saying that they want "more" work, what they are talking about is a job that is more secure and predictable in its hours. About one-third of respondents report that they have done "gig work" in the previous month.


In this survey, gig work covers personal service activities, such as child care, house cleaning, or ride-sharing, as well as goods-related activities, such as selling goods online or renting out property. This definition of gig work includes both online and offline activities, underscoring the fact that most of these activities predate the internet. Many adults who engage in gig work use it to supplement their income, but some rely on it for their main source of income. Finally, these gig activities are often done occasionally and do not take much time, and thus may not fit neatly in a standard concept
of what is considered to be “work.” 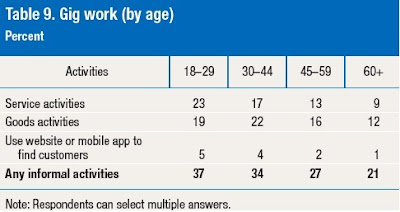 A substantial share of people have not current on paying their bills--often because of an unpaid credit card balance.

Even without an unexpected expense, 17 percent of adults expected to forgo payment on some of their bills in the month of the survey. Most frequently, this involves not paying, or making a partial payment on, a credit card bill. Four in 10 of those who are not able to pay all their bills (7 percent of all adults) say that their rent, mortgage, or utility bills will be left at least partially unpaid. Another 12 percent of adults would be unable to pay their current month’s bills if they also had an unexpected
$400 expense that they had to pay.

The survey also asks about the "unbanked" and the "underbanked":

Lots of people don't feel that they are on track for retirement:

There's lots more in the report with breakdowns of income, education, student loans, housing, neighborhoods, and so on. But again, the overall sense is that most people feel fairly good about their status, but also have a list of economic worries and insecurities about not enough work, being up against the edge of regular bills, and a sense that they aren't preparing for retirement. Of course, some of these worries are just the stuff of life. Some of the worries might be addressed by helping people learn to manage their money better. But the stresses of these uncertainties and insecurities are also real and meaningful in the lives of many people, and they are likely to respond to politicians who acknowledge these concerns and offer promises to address them.
Posted by Timothy Taylor at 12:00 PM