The last two US recessions were both linked to financial markets: that is, the dot-com boom-and-bust of the late 1990s leading up to the recession of 2001, and how the housing market boom-and-bust worked its way through the financial system in the lead-upto the Great Recession from 20017-2009. One could that that financial markets actually led the say into the last three US recessions, depending on how one views the meltdown of the US savings and loan industry in the lead-up to the 1990-91 recession. Thus, when looking around for how the next recession might arise, it's natural to scan financial markets, and corporate bonds keep coming up as a potentially worrisome area.


Between 2008-2018 global corporate bond issuance averaged USD 1.7 trillion per year, compared to an annual average of USD 864 billion during the years leading up to the financial crisis. As a result, the global outstanding debt in the form of corporate bonds issued by non-financial companies reached almost USD 13 trillion at the end of 2018. This is twice the amount in real terms that was outstanding in 2008. The United States remains the largest market for corporate bonds. But non-financial companies from most other economies, including Japan, the United Kingdom, France and Korea, have all increased their use of corporate bonds as a means of borrowing. On a global scale, the most significant shift has been the rapid growth of the Chinese corporate bond market. The People’s Republic of China (China) has moved from a negligible level of issuance prior to the 2008 crisis to a record issuance amount of USD 590 billion in 2016, ranking second highest in the world. 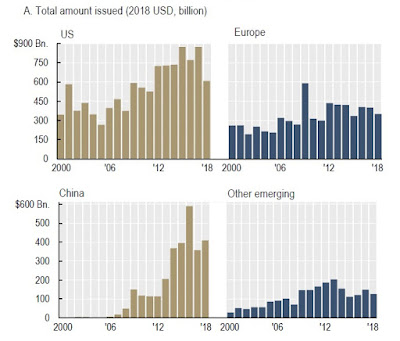 Much of this rise in corporate debt was desired by policy-makers and beneficial to the world economy. After all, when central banks reduce interest rates, the hope is to stimulate borrowing that will raise aggregate demand in the economy. When policy-makers pass regulations to limit the risks taken by banks, they are in effect pushing some of that borrowing out of the banking sector and into bond markets--where the risks will be carried by private investors.


But when borrowing rises sharply, there are also natural questions to ask. Is the overall level of risk associated with these loans rising or falling? Are the borrowers actually planning to repay, or are they planning to take out more loans in the future--thus raising the possibility of "roll-over risk" if it becomes harder for them borrow in the future? Or to make these questions concrete, think about how the coronavirus news affects the risks of the bonds already issued in the enormous surge of borrowing by Chinese corporations.

Another way of looking at risk is to look at the "covenant protection," which refers to the legal language in the bond contracts and how much power it gives to those who purchased the bonds if repayment isn't made on time. These protections have been weakening, too.

Compared to the pre-2008 period there has been a marked decrease in the use of key covenants for non-investment grade bonds. ... While lower levels of covenant protection may allow companies to escape default for a longer time, the expectation of a company’s default and achievable recovery rates may still affect investor portfolios negatively. Moreover, historical data shows that low quality covenants have a significant negative effect on recovery rates.

Yet another way of looking at risk in corporate bonds is to look at how much the companies need to repay in the relatively near-term of the next few years.

As of December 2018, companies in advanced economies need to pay or refinance USD 2.9 trillion within 3 years and their counterparts in emerging economies USD 1.3 trillion. At the 1-, 2- and 3-year horizons, advanced and emerging market companies have the highest corporate bond repayments since 2000. Notably, for emerging market companies, the amount due within the next 3 years has reached a record of 47% of the total outstanding amount; almost double the percentage in 2008. 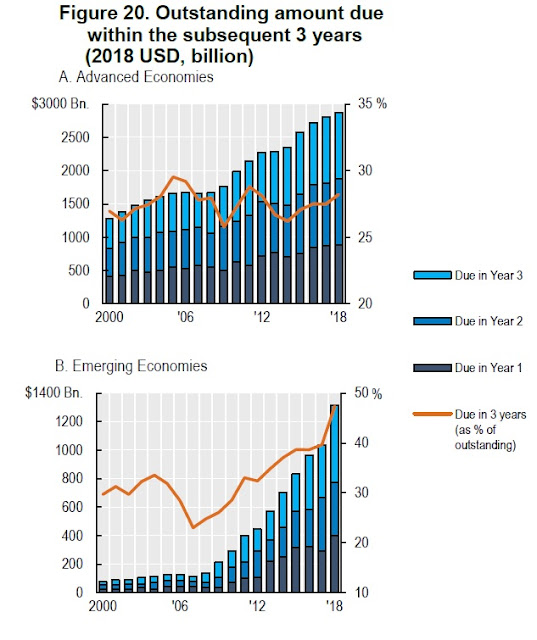 The OECD report has lots more detail about specific categories of corporate bonds and their risks. Here, I'll just add that from a macroeconomic perspective, the issue here isn't the safety or riskiness of specific corporate bonds, or even the corporate bond sector as a whole. The issue is that corporate debt is a magnifier in both good and bad economic times. If the world economy receives a a sufficiently large negative shock, corporations with more debt--and more risky debt--are going to find themselves in a more fragile financial position. As a result, they will be more likely to cut back on investing in expanding production through new plant and equipment, research and development, and hiring additional workers.


For China's economy, one way in which disruptions from the coronavirus are going to percolate through to the rest of the economy is through China's corporate bond market. For the US economy, at least some monetary and banking policymakers are already doing some advance thinking about how to react if the US corporate bond market comes under stress.

For some previous posts and link to reports and commenters worried about corporate debt, see: