The Transformation of Federal Spending

When the president submits a proposed budget each year, I don't pay much attention to the details. It will inevitably be declared "dead on arrival" by the opposition party, and what actually happens will be hashed out over the next year. However, I do often spend some time turning the pages of some supplementary budget documents, including the Historical Tables and the Analytical Perspectives volumes. For example, Table 6.1 of the Historical Tables is called "Composition of Outlays: 1940-2025." Here's some data from that table, showing a dramatic but not-much-discussed transformation of federal spending in the last 60 years. 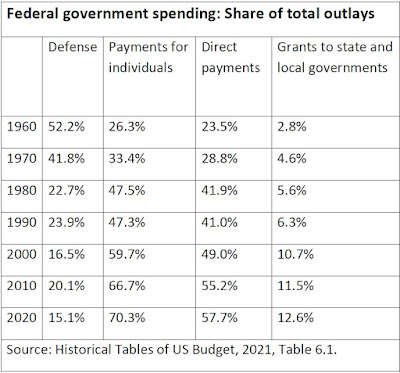 A few things to notice:

3) The last two columns of the figure show the breakdown in federal "Payments for individuals," that is, how much went directly to individuals and how much went via grants to state and local governments. Back in 1960, roughly 1 out of every 35 federal dollars spent went to state and local governments for payments to individuals; now, it's about 1 out of every 8 federal dollars spent goes to this purpose.

In some ways, this table represents what used to be called the "peace dividend"--that is, a movement of government spending from defense to non-military uses.

This fundamental transformation in federal spending so that it focuses on payments to individuals just sort of happened, but it seems to to me to represent a shift in how most Americans now see the central purpose of the federal government. One occasionally hears the battle cry, "If we can put an astronaut on the moon, then ..." But landing a person on the moon is an old-fashioned activity from the earlier spending patterns of the federal government, because it's not about payments to individuals. If you wonder why it seems as if there are so few federal financial resources for areas like R&D, science, roads and bridges, water supply and sewage, cybersecurity, diplomacy, education at all levels, environmental monitoring, and other areas, one relevant answer is that by far the primary purpose of the federal government has become to make payments to individuals.

For a couple of other posts from a few years back on this broad theme, see: