The US Rental Housing Market

The US rental housing market is in the middle of some major shifts, as outlines by the Joint Center for Housing Studies of Harvard University in its report "America's Rental Housing 2020" (January 2020). Here are some of the changes.

The "rentership rate"--the share of households renting--rose sharply from about 2004 to about 2016, before leveling out the last few years. 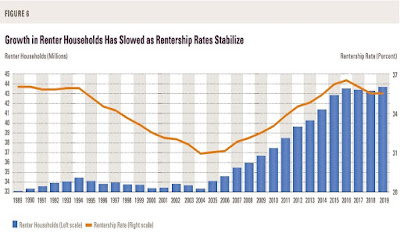 From 2000 to 2010, most of the growth in the housing rental market was coming from those with relatively lower incomes. But in the last decade, most of the growth in the rental housing market is coming from those with relatively higher incomes. "But at 22 percent in 2019, rentership rates among households earning $75,000 or more are at their highest levels on record. Even accounting for overall income growth, rentership rates for households in the top decile jumped from 8.0 percent in 2005 to 15.1 percent in 2018 as their numbers more than doubled." 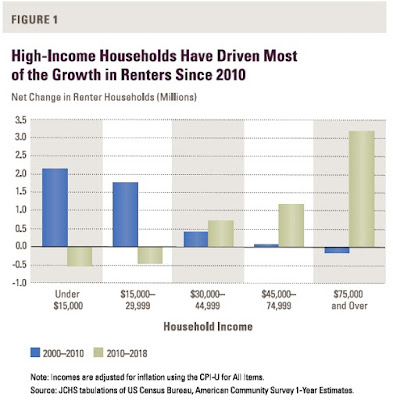 Rent is a big burden for many. The report looks at renters who are "cost burdened," referring to those who pay more than 30% of their income in rent. "Thanks to strong growth in the number of high-income renters, the share of renters with cost burdens fell more noticeably from a peak of 50.7 percent in 2011 to 47.4 percent in 2017, followed by a modest 0.1 percentage point increase in 2018. ... Meanwhile, 10.9 million renters—or one in four—spent more than half their incomes on housing in 2018." Another big shift is that there is a rise in the "cost-burdened renters" in middle-income groups (say, $30,000-$75,000 per year in annual income), especially in  "larger, high-cost metropolitan areas."

Vacancy rates for rentals are down, and are especially low for lower-cost, lower-quality rentals. 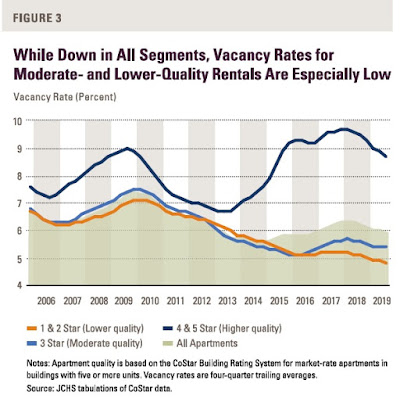 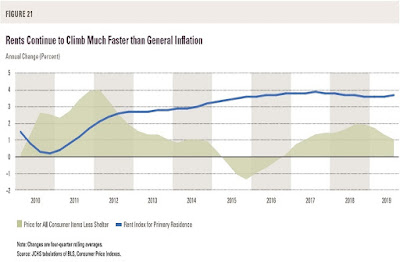 The value of apartment properties has risen quickly, too. 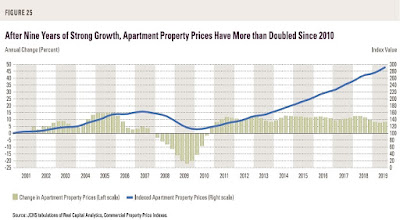 Some background factors are also shifting. In the market for rental properties, stock of rentals rising in two areas  over last 15-20 year: single-family homes, and multi-family buildings with 20 or more units. These changes represent a shift in the rental housing market away from individual landlords and toward corporate ownership of rentals. In the area of single-family homes, for example, a number of institutional investors bought houses as rental properties in the aftermath of the drop in housing prices around 2010. The report notes:


Ownership of rental housing shifted noticeably between 2001 and 2015, with institutional owners such as LLCs, LLPs, and REITs accounting for a growing share of the stock. Meanwhile, individual ownership fell across rental properties of all sizes, but especially among buildings with 5–24 units. Indeed, the share of mid-sized apartment properties owned by individuals dropped from nearly two-thirds in 2001 to about two-fifths in 2015. Given that units in these structures are generally older and have relatively low rents, institutional investors may consider them prime candidates for purchase and upgrading. These changes in ownership have thus helped to keep rents on the climb.

Another shift is that many renters seem happier being renters, and less likely to view a rental as a short-term stop on the path to homeownership. Renters are staying in place longer, too. The report notes:


Changes in attitudes toward homeownership may lead some households to continue to rent later in life. The latest Freddie Mac Survey of Homeowners and Renters reports that the share of genX renters (aged 39–54 in 2019) with no interest in ever owning homes rose from 10 percent in March 2017 to 17 percent in April 2019. ... Fully 75 percent of renters overall, and 72 percent of genX renters, stated that renting best fits their current lifestyle. ...

[M]any renters are staying in the same rental units for longer periods. Between 2008 and 2018, the share of renters that had lived in their units for at least two years increased from 36 percent to 41 percent among those under age 35, and from 62 percent to 68 percent among those aged 35–64. Similarly, the National Apartment Association reported a turnover rate of just 46.8 percent in 2018— the lowest rate of move-outs since the survey began in 2000.

The US rate of homeownership has often been in the range of 63-65%, going up above that range during the housing boom around 2006, back down after that, and then rebounding a bit in the last few years.  Looking at long-run trends of aging, marriage/parenthood, and income, the US Department of Housing and Urban Development organized a pro-and-con symposium a few years ago on the question of whether the US homeownership rate will have fallen to less than 50% by 2050. Homeownership rates for young adults and for blacks are especially low. The US rate of homeownership was about average by international standards 20-25 years ago, but now is below the average. For earlier posts on these themes, see:


With regard to the broader social issue of rental prices being so high for so many people, the economic answer is straightforward. For those with very low incomes, help them afford the rent. But for the market as a whole, the way to get lower prices is to raise supply. For example, it's an interesting question as to why the individual landlord has been in such decline, and the extent to which this drop has been due to additional administrative, regulatory, and zoning costs being imposed at the state and local level. It seems to me possible that we are in the middle of a social shift in which many households at a variety of income levels put less emphasis on homeownership--which in turn means greater public attention to conditions of supply and demand in housing rental markets.
Posted by Timothy Taylor at 11:25 AM