Americans spent $5.8 billion on pet care services in 2017, according to recent estimates from economists at the US Bureau of the Census. To be clear: "The pet care services industry (NAICS code 812910) includes services such as grooming, boarding, training and pet sitting. It does not include veterinary services, boarding horses, transporting pets, pet food or other pet supplies."

My first thought on seeing the pet care services article was to be reminded, yet again, of the enormous size and richness of the US economy. My second thought was about costs of US national elections.

According to the OpenSecrets website run by the Center for Responsive Politics, total spending for federal elections in 2016--including the presidential campaign, as well as races for the House and Senate--was $4.6 billion. One suspects that with billionaires Michael Bloomberg and Tom Steyer tossing around money will raise the total election campaign spending for 2020. (Bloomberg has reported put $464 million into his campaign so far, and Steyer has put $267 million into his campaign.) But even so, Americans will probably spend roughly the same on pet care services in 2020 than the total amount spent on all campaigns for the presidency and Congress.

As another comparison, the US corporations that spend most heavily on advertising in 2018 are Comcast ($6.12 billion), AT&T ($5.36 billion), Amazon ($4.47 billion), Procter & Gamble ($4.3 billion. It's very likely in the 2020 that perhaps 5-7 large companies will each individually have an advertising budget above the total spent by all presidential candidates (in 2016, $1.4 billion), and the top 1-2 corporate spending budgets will exceed the total spent on all campaigns for the presidency and Congress combined.

On one side, the total amounts spent on national election campaigns do seem large. But give the power that politicians wield over the $4.6 trillion federal budget, not to mention over the passage of domestic regulations and foreign policy, all in the context of a US GDP of $22 trillion in 2020, the amounts spent on campaigning don't seem vastly out of line.

From this perspective, what's remarkable is not how much the US spends on elections, but how little. This isn't a new observation: back in 2003, the Journal of Economic Perspectives ran an article called "Why Is There so Little Money in U.S. Politics?" by Stephen Ansolabehere, John M. de Figueiredo and James M. Snyder Jr. They argued that the evidence does not support a view of campaign contributions as an investment by special interests expecting a return; instead, campaign contributions are better viewed as a form of consumption spending, in which contributors enjoy a sense of connectedness and participation.

Ultimately, it's not the total amount of spending on campaigns that annoys or concerns me. It's that the ads are banal, uncreative, information-free, not gently but obviously full of spin. In addition, the campaigns see fit to hit you with the same ads over and over again. By Election Day, it is hard for me to avoid a feeling that the advertising agencies for the candidates--and by extension the candidates themselves--feel disdain or contempt for the electorate.

My other concern is that while people obsess over total campaign spending, which mostly happens out in the open through live candidate events and media advertising, the totally different category of lobbying expenses fly under the radar. The OpenSecrets website also collects data on lobbying expenses; in 2019, for example, over 11,000 registered lobbyists spent $3.5 billion. My suspicion is that this total is an underestimate, because a lot of what might reasonably be called lobbying is not registered and recorded. But we know that lobbying happens every year, whether there is an election or not. How this lobbying is directed is murky, and what it accomplishes in adjusting the fine print of legislation or nipping certain proposals in the bud is opaque. Here's a figure from OpenSecrets: 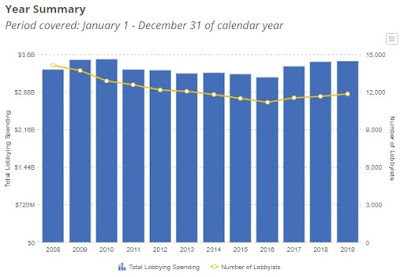