How US Science and Engineering Depends on Immigrants

Every other year, the National Science Foundation is required to publish a "Science and Engineering Indicators" report. For the January 2020 version, the NSF went with a summary report, called "The State of U.S. Science & Engineering 2020," which is then accompanied by seven more detailed reports. Here, I'll focus on some evidence from the overview report on the subject of how the US science and engineering workforce depends on immigrants, both as worker and also as students in its higher education system. 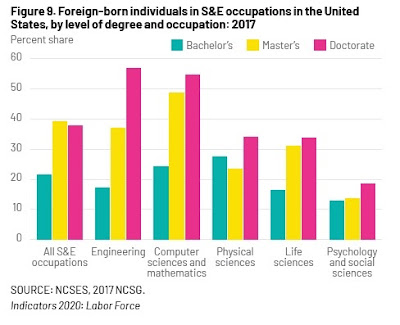 Within the US higher education system, a disproportionate number of the science and engineering degrees go to immigrants--many of whom then remain in the US economy at least for a time

In the United States, a substantial proportion of S&E doctoral degrees are conferred to international students with temporary visas. In 2017, temporary visa holders earned one-third (34%) of S&E doctoral degrees, a relatively stable proportion over time. They account for half or more of the doctoral degrees awarded in engineering, mathematics and computer sciences, and economics. Three Asian countries—China, India, and South Korea—are the largest source countries and accounted for just over half (54%) of all international recipients of U.S. S&E research doctoral degrees since 2000. By comparison, students on temporary visas earn a smaller share (6% in 2017) of S&E bachelor’s degrees. However, the number of these students has more than doubled over the past 10 years.

I know that we live in times of substantial concern about how technology may be transferred from the United States to other countries. Whatever one's concerns in that area, there is also another side to consider, which is that in raw numerical terms the US has a heavy dependence on imported science and engineering workers and American universities in science and engineering fields maintain their status and preeminence thank in substantial part to their foreign students.

The NSF report also points out that when it comes to sheer numbers of science and engineering degrees, the dominant position of the US and European economies is eroding. For example, here are the trends in the number of university degrees  given in science and engineering. That rising purple line is the total for China, taking off. Concerns are sometimes raised that a number of these degrees in China may not represent especially high quality achievement in learning. But the sheer numbers are nonetheless striking--and the quality does seem to be improving over time. 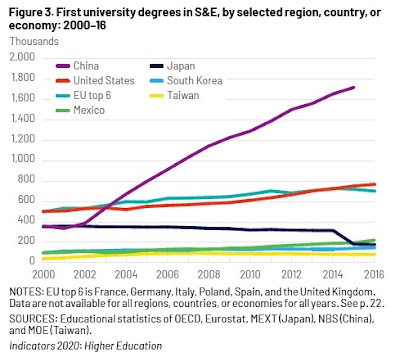 A similar if less vivid trend is apparent in granting of doctoral degrees in science and engineering fields. Here, the large EU economies have a lead compared to the US, with China and India rising rapidly 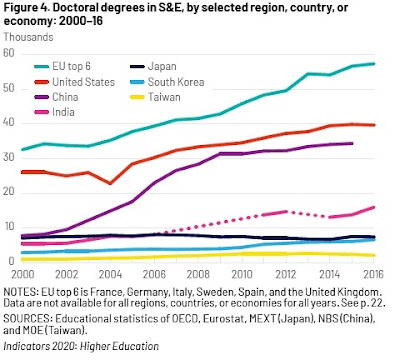 The economic competitiveness of nations is built to a substantial extent on the talents of their workforce.  It seems likely that future economic growth for the US and other advanced economies will depend heavily on the industries built on advances in science and engineering. One of the great competitive advantages for the US economy has been that its education system, economy, and society are attractive and open to so many workers and students from around the world with skills in these areas.
Posted by Timothy Taylor at 2:54 PM