Research and development isn't enough by itself. . New discoveries needs to be brought into the economy in the form of new companies, new products, and new jobs. But it matters. A long-standing concern among economists is that a market-oriented economy may tend to underinvest in R&D, because even with intellectual property like patents and trade secret law, an innovator captures on average only a modest share of the social benefits from R&D. Thus, a variety of estimates suggest that the social return from more R&D spending is 60%, or that the US should be aiming over time to double its R&D spending.

This figure shows total domestic spending on R&D (government, private-sector, nonprofits). The US leads the way. The purple line is China, which surpassed Japan about a decade ago and Europe about five years ago. 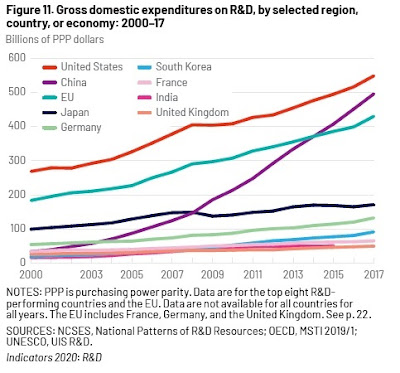 If you look at the growth rate of R&D from 2000-2017, you can see that the China is the most obvious area catching up to the US, but certainly not the only one. 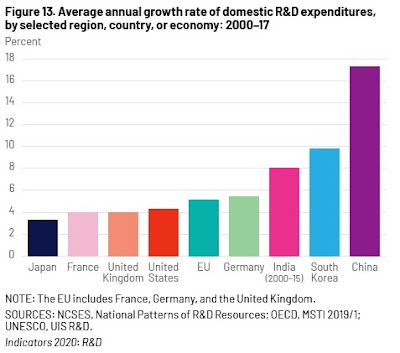 As a result of these ongoing shifts, the US used to be the preeminent region for R&D spending. But now, the the primary geographical  home of most global R&D is the East and South Asia region. 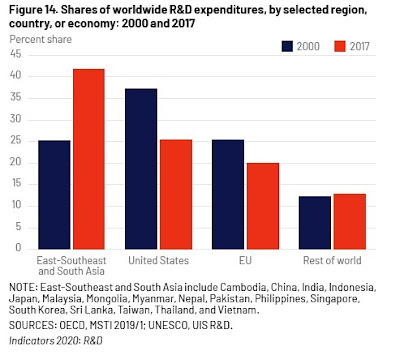 One issue is that the US spends about 2.5% of GDP on R&D in most years, give or take a few tenths of a percent. Germany, Japan, and South Korea spend more. China spends a lower share of GDP on R&D, but the share has been rising and of course China's GDP has also been growing quite rapidly in recent decades. 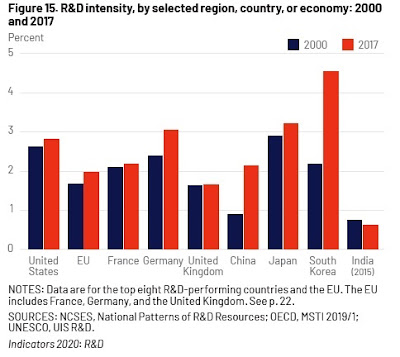 In the US, government spending on R&D has been pretty flat for the last decade or so; instead, it has been business spending on R&D leading the way. Business involvement in R&D spending is clearly a good thing, because it suggests that business are seeing ways to bring new discoveries into the day-to-day operations. However, there are also concerns that when it comes to research and development, business can be heavier on the "D" and lighter on the "R." The giant corporate laboratories of the past like AT&T's Bell Labs, Xerox's Palo Alto Research Center, IBM's Watson Labs, and DuPont's Purity Hall have diminished in scope or closed altogether. Relatively few modern companies finance research in basic science, or in long-horizon, high-risk projects that may turn out to be central to whole new industries. 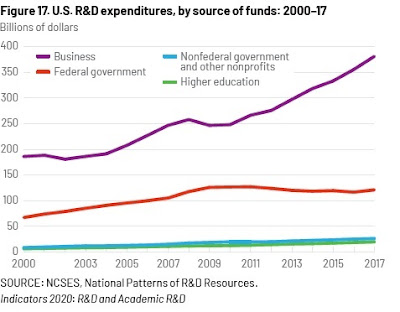 When confronted with these kinds of issues, a standard US response is to raise suspicions that the quality of R&D being done in China or across other countries of east and south Asia may not be very high. It's of course hard to measure the quality of research, but one method is to look at whether research articles are heavily cited by follow-up research. The NSF report explains:

The impact of an economy’s S&E [science & engineering] research can be compared through the representation of its articles among the world’s top 1% of cited articles, normalized to account for the size of each country’s pool of S&E publications. This normalized value is referred to as an index and is similar to a standardized score. For example, if a country’s global share of top articles is the same as its global share of all publication output, the index is 1.0. The U.S. index was 1.9 in 2016, meaning that its share of the top 1% of cited articles was about twice the size of its share of total S&E articles (Figure 22). Between 2000 and 2016, the EU index of highly cited articles grew from 1.0 to 1.3 while China’s index more than doubled, from 0.4 to 1.1, indicating rising impact from both areas. 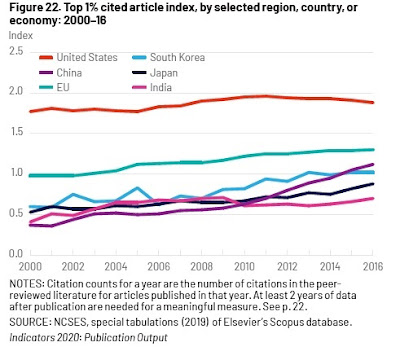 In short, this metric suggests that US research efforts are more likely to be in the top 1% of the research literature. It also suggests that the gap is closing.

I often see proposals for the US to focus on building its transportation infrastructure, like roads, bridges, railroads, and airports. One can certainly make a reasonable case for such investments. But I also suspect that transportation spending is not going to be the main driver for leading global economies for the remaining four-fifths of the 21st century. A serious national conversation on how best to expand US R&D spending substantially is overdue.
Posted by Timothy Taylor at 11:31 AM