I am now in my 34th year as Managing Editor of the Journal of Economic Perspectives. The JEP is published by the American Economic Association, which decided about a decade ago--to my delight--that the journal would be freely available on-line, from the current issue back to the first issue. You can download it various e-reader formats, too. Here, I'll start with the Table of Contents for the just-released Winter 2020 issue, which in the Taylor household is known as issue #131. Below that are abstracts and direct links for all of the papers. I will probably blog more specifically about some of the papers in the next week or two, as well. 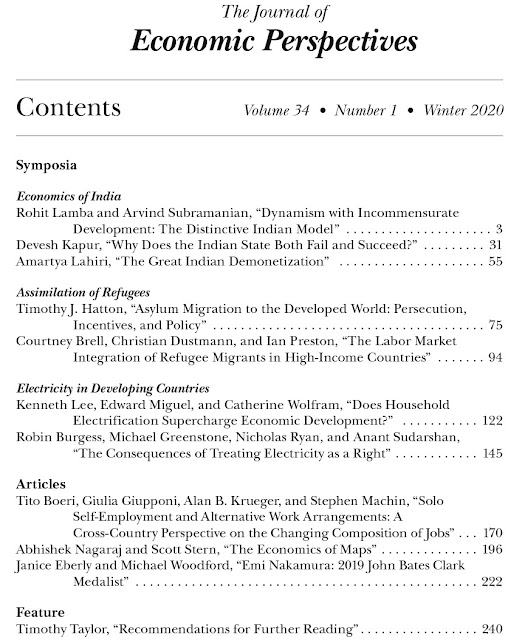 "Dynamism with Incommensurate Development: The Distinctive Indian Model," by Rohit Lamba and Arvind Subramanian
India's sequencing of economic and political development has been unusual. In contrast to the West and more recently East Asia, democratization has preceded economic growth. Notwithstanding its unique path, India has grown substantially over the last four decades, pulling hundreds of millions out of poverty. The pace, durability, and stability of economic growth has been matched by few countries in the post-war period. This dynamism, though, has not been matched by development in several dimensions: a structural transformation that has skipped high-productivity manufacturing despite surplus labor, an increased spatial divergence in income despite integration in internal markets, limited convergence in education and other social metrics across castes but divergence across religions, a deep societal preference for sons that is associated with poor outcomes for women and high levels of stunting amongst children, and an environmental degradation that is severe for its level of income. The paper speculates on two immediate challenges: reviving dynamism when human capital development remains weak and the financial system is impaired and accelerating development when state capacity remains limited.
Full-Text Access | Supplementary Materials

"Why Does the Indian State Both Fail and Succeed?" by Devesh Kapur
The Indian state's performance spans the spectrum from woefully inadequate, especially in core public goods provision, to surprisingly impressive in successfully managing complex tasks and on a massive scale. It has delivered better on macroeconomic rather than microeconomic outcomes, where delivery is episodic with inbuilt exit than where delivery and accountability are quotidian and more reliant on state capacity at local levels, and on those goods and services where societal norms on hierarchy and status matter less than where they are resilient. The paper highlights three reasons for these outcomes: under-resourced local governments, the long-term effects of India's "precocious" democracy, and the persistence of social cleavage. However, claims that India's state is bloated in size and submerged in patronage have weak basis. The paper concludes by highlighting a reversal of past trends in that state capacity is improving at the micro level even as India's macro performance has become more worrisome.
Full-Text Access | Supplementary Materials

"The Great Indian Demonetization," by Amartya Lahiri
On November 8, 2016, India demonetized 86 percent of its currency in circulation. The stated objectives of the move were to seize undeclared income, to destroy counterfeit currency, to speed up formalization of the economy, and to increase the tax base. I find that the evidence over the subsequent three years suggests that the move had limited success in achieving its stated objectives. Disaggregated data suggests that demonetization did have appreciable costs in terms of lost jobs and output. However, the output costs appear to have been temporary.
Full-Text Access | Supplementary Materials

Symposium on Assimilation of Refugees

"Asylum Migration to the Developed World: Persecution, Incentives, and Policy," by Timothy J. Hatton
The European migration crisis of 2015-2016 and the migrants from Central America gathering on the US border since 2017 have created headlines and presented challenges for Western governments. In this paper, I examine the trends in, and determinants of, the number of asylum seekers applying for refugee status in the developed world. This must be understood against the background of an international policy regime that evolved in response to refugee crises and geo-political imperatives. While policy has drawn a sharp distinction between refugees and other immigrants, that difference has become increasingly blurred among asylum migrants. In this light, I examine the interplay between migration pressures, public opinion, and asylum policies in recent decades.
Full-Text Access | Supplementary Materials

"The Labor Market Integration of Refugee Migrants in High-Income Countries," by Courtney Brell, Christian Dustmann and Ian Preston
We provide an overview of the integration of refugees into the labor markets of a number of high-income countries. Discussing the ways in which refugees and economic migrants are differently selected and so might be expected to perform differently in a host country's labor market, we examine employment and wages for these groups over time after arrival. There is significant heterogeneity between host countries, but in general, refugees experience persistently worse outcomes than other migrants. While the gaps between the groups can be seen to decrease on a timescale of a decade or two, this is more pronounced in employment rates than it is in wages. We also discuss how refugees are distinct in terms of other factors affecting integration, including health, language skills, and social networks. We provide a discussion of insights for public policy in receiving countries, concluding that supporting refugees in early labor market attachment is crucial.
Full-Text Access | Supplementary Materials

Symposium on Electricity in Developing Countries

"Does Household Electrification Supercharge Economic Development?" by Kenneth Lee, Edward Miguel and Catherine Wolfram
In recent years, electrification has reemerged as a key priority in low-income countries, with a particular focus on electrifying households. Yet the microeconomic literature examining the impacts of electrifying households on economic development has produced a set of conflicting results. Does household electrification lead to measurable gains in living standards or not? Focusing on grid electrification, we discuss how the divergent conclusions across the literature can be explained by differences in methods, interventions, potential for spillovers, and populations. We then use experimental data from Lee, Miguel, and Wolfram (2019)—a field experiment that connected randomly selected households to the grid in rural Kenya—to show that impacts can vary even across individuals in neighboring villages. Specifically, we show that households that were willing to pay more for a grid electrification may gain more from electrification compared to households that would only connect for free. We conclude that access to household electrification alone is not enough to drive meaningful gains in development outcomes. Instead, future initiatives may work better if paired with complementary inputs that allow people to do more with power.
Full-Text Access | Supplementary Materials


"The Consequences of Treating Electricity as a Right," by Robin Burgess, Michael Greenstone, Nicholas Ryan and Anant Sudarshan
This paper seeks to explain why billions of people in developing countries either have no access to electricity or lack a reliable supply. We present evidence that these shortfalls are a consequence of electricity being treated as a right and that this sets off a vicious four-step circle. In step 1, because a social norm has developed that all deserve power independent of payment, subsidies, theft, and nonpayment are widely tolerated. In step 2, electricity distribution companies lose money with each unit of electricity sold and in total lose large sums of money. In step 3, government-owned distribution companies ration supply to limit losses by restricting access and hours of supply. In step 4, power supply is no longer governed by market forces and the link between payment and supply is severed, thus reducing customers' incentives to pay. The equilibrium outcome is uneven and sporadic access that undermines growth.
Full-Text Access | Supplementary Materials

"Solo Self-Employment and Alternative Work Arrangements: A Cross-Country Perspective on the Changing Composition of Jobs," by Tito Boeri, Giulia Giupponi, Alan B. Krueger and Stephen Machin
The nature of self-employment is changing in most OECD countries. Solo self-employment is increasing relative to self-employment with dependent employees, often being associated with the development of gig economy work and alternative work arrangements. We still know little about this changing composition of jobs. Drawing on ad-hoc surveys run in the UK, US, and Italy, we document that solo self-employment is substantively different from self-employment with employees, being an intermediate status between employment and unemployment, and for some, becoming a new frontier of underemployment. Its spread originates a strong demand for social insurance which rarely meets an adequate supply given the informational asymmetries of these jobs. Enforcing minimum wage legislation on these jobs and reconsidering the preferential tax treatment offered to self-employment could discourage abuse of these positions to hide de facto dependent employment jobs. Improved measures of labor slack should be developed to acknowledge that, over and above unemployment, some of the solo self-employment and alternative work arrangements present in today's labor market are placing downward pressure on wages.
Full-Text Access | Supplementary Materials

"The Economics of Maps," by Abhishek Nagaraj and Scott Stern
For centuries, maps have codified the extent of human geographic knowledge and shaped discovery and economic decision-making. Economists across many fields, including urban economics, public finance, political economy, and economic geography, have long employed maps, yet have largely abstracted away from exploring the economic determinants and consequences of maps as a subject of independent study. In this essay, we first review and unify recent literature in a variety of different fields that highlights the economic and social consequences of maps, along with an overview of the modern geospatial industry. We then outline our economic framework in which a given map is the result of economic choices around map data and designs, resulting in variations in private and social returns to mapmaking. We highlight five important economic and institutional factors shaping mapmakers' data and design choices. Our essay ends by proposing that economists pay more attention to the endogeneity of mapmaking and the resulting consequences for economic and social welfare.
Full-Text Access | Supplementary Materials

"Emi Nakamura: 2019 John Bates Clark Medalist," by Janice Eberly and Michael Woodford
Emi Nakamura is the 2019 recipient of the John Bates Clark Medal from the American Economic Association. Emi is an empirical macroeconomist whose work has studied the nature of price-setting and the effects of monetary and fiscal policies, among other issues, and has been notable for using less aggregated data, while addressing central questions about the macroeconomy. We describe Emi's key research contributions, with particular emphasis on those identified by the Honors and Awards Committee of the American Economic Association in her Clark Medal citation, as well as her broader contributions to the field of economics.
Full-Text Access | Supplementary Materials