China-US Trade: Some Patterns Since 1990

In US-based conversations about China-US trade, it sometimes seems to me that the working assumption is that China's economy is heavily dependent on trade with the United States--which in turn would give the US government strong leverage in trade disputes.  How true is that assumption? Here's some baseline evidence from the DHL Global Connectedness Index 2020: The State of Globalization in a Distancing World, by Stephen A. Altman and Phillip Bastian (December 2020). 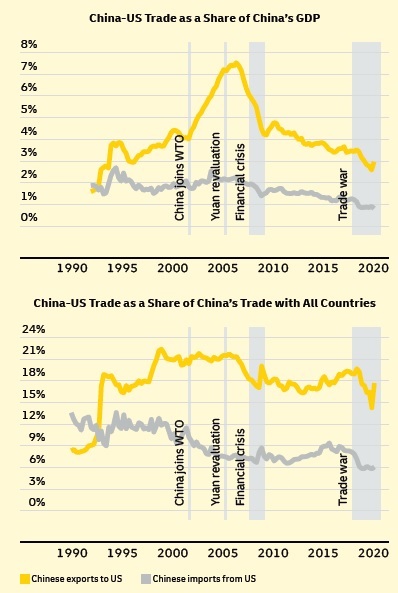 What about if we do the same calculations about US-China trade, but this time looking at the size of the flows relative to the US economy? The next figure shows how US imports from China as a share of US GDP: typically about 2.4-2.8% of US GDP in the last decade, before dropping lower in the trade war.
The next panel shows that US imports from China have risen as a share of total US trade to about 21% of total US trade in the years before the pandemic--and seems to have rebounded back to that level after a short drop in the trade war. 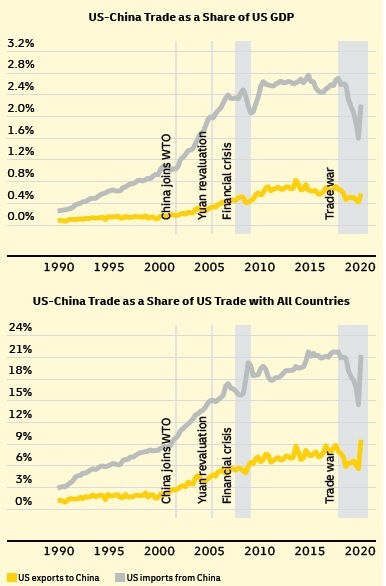 Altman and Bastian describe some other patterns of US-China economic interactions as well:

Beyond trade, trends are mixed across other flows between the US and China. FDI flows in both directions rose from 2018 to 2019, although Chinese FDI into the US remained far below its 2016 peak. According to a recent analysis from the Peterson Institute for International Economics, “despite the rhetoric, US-China financial decoupling is not happening.” On the other hand, Chinese tourism to the US began declining in 2018, after 15 consecutive years of increases. And while it does not (yet) show up in broad patterns of international flows, US-China tensions over key technologies continue to boil, most notably with respect to 5G networking equipment (centered on Huawei) and social media (TikTok, WeChat) ...

Of course, the reality of international trade is that saying "China depends on the US for a substantial share of export sales" has precisely the same meaning as saying "the US depends on China for a substantial share of its supplies from imports."  Yes, the US could buy more from non-China countries and China could sell more to non-US countries, but changing the address labels on the shipping crates doesn't make much difference to the underlying economic forces at work. I'm reminded of a comment from Lawrence Summers in an interview last spring about US-China relations:

At the broadest level, we need to craft a relationship with China from the principles of mutual respect and strategic reassurance, with rather less of the feigned affection that there has been in the past. We are not partners. We are not really friends. We are entities that find ourselves on the same small lifeboat in turbulent waters a long way from shore.