Viscusi is known for, as he says early in the paper, attempting to "strike a meaningful balance between risk and costs," even though "[e]conomic analyses in these domains are sometimes challenging and necessarily involve treading on controversial terrain.
Thus, his analysis starts with standard estimates for the "value of a statistical life" of $11 million. The idea of a VSL is discussed here and here.  But the key point to understand is that the number is built on actual  real-world choices about risk, like how much more do people get paid for a riskier job, or what safety requirements for a car or a consumer product are judged to be "acceptable" or "too expensive." For example, say the government proposes a regulation that costs $110 million, but it is projected to reduce risks in a way that saves 11 lives in a city of 1.1 million people. That decision is implicitly saying that it's worthwhile for government to spend of $10 million per life saved. This reduction in risk is referred to as a "statistical" life saved. Using the standard measure of $11 million, mortality costs alone for COVID-19 in the US were $3.9 trillion through December 2020.
It's a little harder to use these same statistical methods to measure morbidity, rather than mortality, because morbidity covers everything from feeling crappy for a few days to a long and life-threatening hospital stay. But Viscusi uses some studies based, for example,  on what people are willing to spend to avoid hospitalization, and argues that the health costs of morbidity may add 40-50% to costs of mortality.
As one more health-related cost, Viscusi has long argued that at some high level of lost income (or high costs), the reactions to those lower income levels will also raise the risks of death, and he cites some of his own recent work to this effect:

[A] loss in income of just over $100 million will lead to one expected death ...  This relationship highlights the important link between the performance of the economy and individual health. Shutting down economic activity to limit the pandemic has adverse health consequences in addition to the favorable reduction in risk due to increased social contacts. Income transfers such as unemployment compensation consequently serve a health-related function in dampening these losses.

Again, the value of a statistical life studies depend are not based on a social or political judgement about fairness or equity: they are based on empirical studies of what people are actually willing to pay to reduce certain risks (or what compensation they need to receive for taking on those risks). Thus, the calculations lead to Viscusi "treading on controversial terrain," as he puts it.

For example, it is generally true that those with lower-incomes will need less compensation for taking on risk. He writes:

There are strong income-related dependencies of the VSL. Many estimates of the income elasticity of the U.S. VSL are in the range of 0.6, and some available estimates are in excess of 1.0. Proper application of these income-related variations in the VSL would reduce the VSL applied to the poor. Many of those most affected by COVID-19 have below average income levels, including essential workers in grocery stores and other retail establishments, as well as those engaged in the production and delivery of food. Similarly, people whose jobs do not permit them to work at home and who must rely on public transit for their commute also are subject to considerable COVID-19 risks. Policies that protect their lives would be less highly valued if there were income adjustments. Given the strong
societal interest in maintaining the efforts of such individuals, it is unlikely that there would be support for applying a lower value to their lives, which in turn would lead to less policy emphasis on protecting their well-being.

Similarly, the value of a statistical life studies tend to find an inverse U-shape with age. Here's an illustrative figure from Viscusi, based on the empirical evidence: 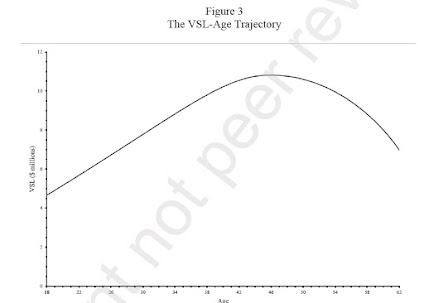 As Viscusi notes, the interpretation whether the empirical findings of a different VSL by age has led to political controversies.

Embarking on any age variation in the VSL is a controversial undertaking. In its analysis
of the Clear Skies Initiative, the U.S. Environmental Protection Agency (EPA) adopted a
downward age adjustment for those age 65 and older, reducing their applicable VSL by 37%. The result was a political firestorm against the “senior discount,” leading to headlines in critical articles such as “Seniors on Sale, 37% off” and “What’s a Granny Worth?” EPA abandoned this approach given the public outcry.

Notwithstanding the potential controversy that arises from even considering the prospect
of downward adjustments in the VSL for people who are older, what would the effect of
adopting an age-adjusted VSL be on the estimates of the mortality costs of COVID-19 Instead of a VSL of $11 million for the age 85, their VSL declines to $3 million. The average age-adjusted VSL for the COVID-19 age distribution is $6.3 million if there is no discounting of the VSLY stream and $5.2 million if a discount rate of 3% is applied to the stream of VSLY values. The total effect of accounting for age adjustments to the VSL is to cut the mortality cost estimate roughly in half.

To be clear, Viscusi is not advocating that public policy should place a different value on people's lives by age, income, or any other metric. He writes:

[T]he risk equity concept that I have found to be attractive in many contexts is what I term `equitable risk tradeoffs.' Thus, rather than equalizing an objective measure of risk or life expectancy levels, the task is to adjust policies to set the risk-money tradeoff equal to a common population-wide VSL.

Some people find the VSL approach to thinking about risk just a useful way of codifying the choices that we are already making; others find it one more example of economics run amok. If you fall into the latter category, you might want to at least consider that when it comes to COVID-19 and future pandemics, Viscusi-style monetary values on mortality and morbidity offer a justification for a much more aggressive public spending response than the United States has actually done. As one example, Viscusi writes:

Given the tremendous benefits that could be derived by having more adequate medical resources, it is preferable from a benefit-cost standpoint to make provision before health crises arise so that severe rationing is not required for the next pandemic. In anticipation of future pandemics, it is feasible to acquire high-quality ventilators at a cost from $25,000 to $50,000. Adding in the cost of medical support personnel would raise the annual  cost to about $100,000. A reserve supply of ventilators could be a component of an anticipatory pandemic policy. Preparing for future pandemics remains a cost-effective strategy even for annual probabilities of a pandemic on the order of 1/100. However, survey evidence by Pike et al. (2020) suggests that support for protective efforts of this type is unlikely to emerge, as there is a lack of public concern with long-term pandemic risks. As a result, there is likely to be a continued shortfall in preparations for prospective risks, leading to future repetitions of the difficult rationing decisions posed by COVID-19.

In addition, Viscusi points out that a number of medical ethicists in the last year have been talking about how to ration available health care resources in various ways, : that is, about who will get certain kinds of care and who won't. Viscusi-style estimates of the value of a statistical life make the case for high levels of government spending to avoid such rationing. As he writes:

If human life is accorded an appropriate monetized value, the application of VSL and efficient principles for controlling risks will lead to greater levels of protection than will result if medical personnel follow the guidance provided by many prominent medical ethicists.

Posted by Timothy Taylor at 3:58 PM