Most of the ingredients of the standard intro econ class have been pretty stable for a long time: opportunity cost and budget constraints, supply and demand, perfect and imperfect competition, externalities and public goods, unemployment and inflation, growth and business cycles, benefits and costs of international trade. In contrast, the topic of how the central bank conducts monetary policy has shifted substantially more than decade ago, in a way that makes earlier textbooks literally obsolete. Jane Ihrig and Scott Wolla offer an overview of the changes in "Monetary Policy Had Changed, Has Your Instruction?" (Teaching Resources for Economics at Community Colleges Newsletter, March 2021).  For a more in-depth discussion, Ihrig and Wolla wrote: “Let’s close the gap: Revising teaching materialsto reflect how the Federal Reserve implements monetary policy” (October 2020, Federal Reserve Finance and Economics Discussion Series 2020-092)

(The TRECC Newsletter has financial support from the NSF and other sources. It currently has about 1500 subscribers. If you are are involved in community college teaching, or you teach a substantial number of lower-level undergraduate courses, you may want to put yourself on the subscription list.)

As Ihrig and Wolla point out, the traditional pedagogy of how monetary policy works focuses on how the Federal Reserve can raise or lower a specific targeted interest rate: the "federal funds" rate. It goes like this:

One big change is in the "policy implementation" arrow. When I was taking intro econ in the late 1970s or when I was teaching big classes in the late 1980s and into the 1990s, the textbooks all discussed three tools for conducting monetary policy: open market operations, changing the reserve requirement, or changing the discount rate.
Somewhat disconcertingly, when my son took AP economics in high school last year, he was still learning this lesson--even though it does not describe what the Fed has actually been doing for more than a decade since the Great Recession. Perhaps even more disconcertingly, when Ihrig and Wolla looked the latest revision of some prominent intro econ textbooks with publication dates 2021, like the widely used texts by Mankiw and by McConnell, Brue and Flynn, and found that they are still emphasizing open market operations as the main tool of Fed monetary policy.
The Fed still targets the federal funds interest rate. But as for the earlier methods of policy implementation, there literally is no reserve requirement any more--no requirement that the banks  hold a certain portion of their assets on reserve at the Fed. The discount rate, where the Fed makes direct loans to institutions, has not been a commonly-used tool of monetary policy, because it was seen as a sign of financial weakness, perhaps even looming insolvency, if a bank needed could not get credit from other sources and needed to borrow from the Fed. The Fed still does open market operations for various reasons, but it is not the tool used to target the federal funds interest rate.
What changed? In the Great Recession, the Fed had reduced its target interest rate--the federal funds interest rate--essentially to zero percent, as show in the figure. The Fed had hit the "zero lower bound," as economists say, but it still wanted and needed to try to boost the economy. 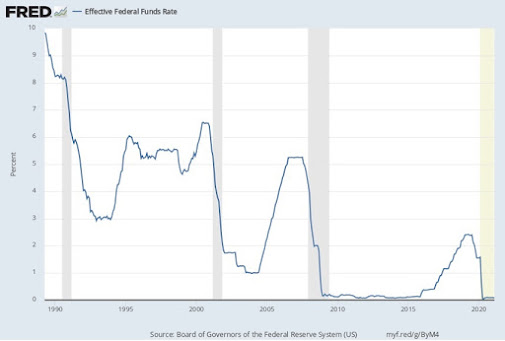 In  particular, during the Great Recession there was deep uncertainty about the true value of certain mortgage-backed securities, and with very few buyers willing to purchase such securities, their value had plunged. Banks and financial institutions that were holding such securities as part of their assets were threatened with insolvency as a result.  Thus, the Fed started a program of "quantitative easing," where the Fed purchased both these mortgage-securities and also Treasury debt directly. Ihrig and Wolla describe it this way:

This shift in framework was spurred on by actions during the global financial crisis. Between 2008 and 2014 the Fed conducted a series of large-scale asset purchase programs to lower longer-term interest rates, ease broader financial market conditions, and thus support economic activity and job creation. These purchases not only increased the Fed's level of securities holdings but also increased the total level of reserves in the banking system from around $15 billion in 2007 to about $2.7 trillion in late 2014. At this point, reserves were no longer limited but instead became quite plentiful, or "ample."

Bank reserves expanded enormously, as shown in this figure. In turn, this shift from "limited reserves" to the new era of "ample reserves" opened up the possibility for a new tool of monetary policy: the Fed could pay interest on these bank reserves. 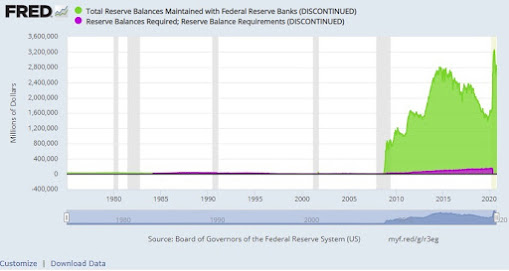 In short, the primary tool that the Fed now uses for the conduct of monetary policy is "interest on reserves," often abbreviated as IOR. This isn't hard to explain. Reserves go up and down for two reasons: one is if the Fed is using quantitative easing to buy Treasury debt or mortgage-backed securities directly, or not; the other is if banks prefer to hold reserves at the Fed and receive the IOR payments, or not. By moving the IOR up or down, the Fed still seeks to target the federal funds interest rate. For example, that rise in the fed funds rate from about 2016-2018, shown above, was a result of a rise in the interest rate paid on reserves.
Thus, if you (or your textbook) is not emphasizing interest paid on reserves as the primary tool of monetary policy, or if (heaven forbid) you are still emphasizing open market operations as the main tool of monetary policy, you are more than a decade out of date. That said, here are some of my remaining questions about how to teach at the intro level how monetary policy is conducted.
1) Should the previous pedagogy from before the ample-reserves era be eliminated from intro-level textbooks? The case for keeping it is partly that many intro-level books teach some recent economic history of the last few decades, and one can explain the shift to the "ample reserves" period. Also, some central banks around the world, like the People's Bank of China, still use tools like altering reserve reserve requirements. But as time passes, the case for dropping the earlier pedagogy grows.
2) Although interest on reserves is the primary tool that the Fed has been using for targeting the Federal funds interest rate, there is also a secondary tool: the overnight reverse repurchase agreement facility that the Fed can use to put a floor under the federal funds interest rate, if it does not rise as desired with changes in the interest paid on reserves. Frankly, I despair of teaching the reverse repo market in an intro-level class. Given that the Fed does not see it as the primary tool, it's one of those topics where I would wait for an appropriate student question and be ready to talk about it during office hours. Or maybe it deserves a "box" in a textbook as some additional terminology worth mentioning. But maybe there's a smart teacher out there with a way to make this work for the intro-level class?
3) Although interest on reserves it the Fed's main policy tool for normal times, neither of the last two recessions have been "normal." One big change mentioned above was the shift to quantitative easing. Another change is the shift to "forward guidance," or trying to affect current economic conditions by announcing the future path of Fed interest rate policy. Yet another is emergency lending facilities aimed at certain parts of financial markets, to make sure they will keep functioning even under economic stress. Here's Ihrig and Wolla in the Fed working paper:

For example, during both crises, the Fed conducted large-scale asset purchases to either deliberately push down longer-term interest rates (the motive during the 2007-2009 financial crisis and subsequent recession) or aid market functioning and help foster accommodative financial conditions (the motive during the COVID-19 pandemic). As a traditional open market operation, when the Fed also made adjustments to existing lending facilities and introduced new, emergency lending facilities to help provide short-term liquidity to banks and other financial institutions. For example, the Fed expanded its currency swap program where it loans dollars to foreign central banks to alleviate dollar funding stresses abroad. It also introduced the Primary Dealer Credit Facility during both stress events, which provided overnight loans to primary dealers and helped foster improved conditions in financial markets.

The current standard practice for teaching the conduct of monetary policy at the intro level is still emerging. At present, my own take is to discuss the shift from limited reserves too ample reserves to give some sense of how these issues have evolved, but as time passes, it will eventually be time to drop the old limited-reserves approach entirely. Instead, for the current time, the tools of monetary policy to teach at the intro level would be interest on reserves, quantitative easing, forward guidance, and emergency (but temporary) lending facilities.