What's Happening with Global Connectedness in the Pandemic?

The last few decades have been a time of economic globalization. But that trend has been faltering for a few years now, with rising political obstacles to trade and migration. Will the global pandemic recession be a force that separates the world economy, or perhaps reinforce some patterns of globalization while hindering others? Steven A. Altman and Phillip Bastian tackle these questions in the DHL GLobal Connectedness Index 2020, subtitled "The State of Globalization in a Distancing World" (December 2020). 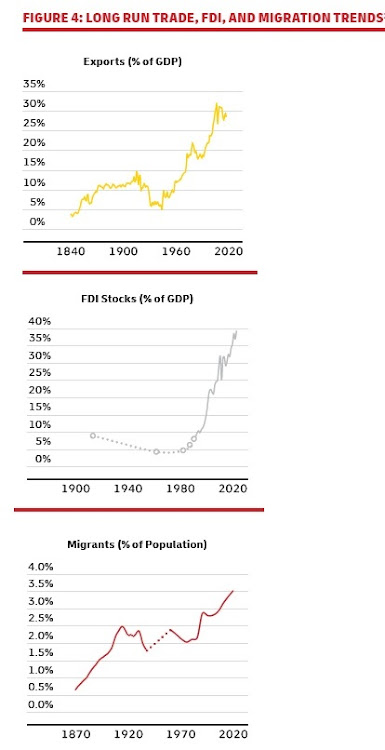 But although the long-run trend toward globalization is clear, Altman and Bastian point out that many people have heard so much about globalization that they tend to overestimate its prevalence. They write:

[M]ost business and personal activity is still domestic rather than international. Roughly 21% of all goods and services end up in a different country from where they were produced. Companies buying, building, or reinvesting in foreign operations via FDI [foreign direct investment] accounted for only 7% of gross fixed capital formation last year. Just 7% of voice call minutes, including calls over the internet, were international. And a mere 3.5% of people lived outside of the countries where they were born. ...

If many of these global “depth” measures are lower than you expected, you are in good company. Surveys of managers, students, and the general public have consistently shown that most people think international flows are larger than they really are. This pattern shows up across countries, as well as respondent characteristics such as level of education, age, gender, and political leanings. ... In public policy, people who overestimate these types of measures tend to presume that globalization is a much bigger factor in joblessness, wage stagnation, and climate change than evidence suggests.

On trade in goods, the report notes:

Covid-19 is on track to cause a much smaller decline in trade intensity than the 2008-09 global financial crisis. This reflects both how quickly trade recovered during 2020 and the fact that many of the industries that were hit hardest by the pandemic (e.g. restaurants) provide local services rather than heavily traded goods. It is also notable that a significant part of the forecasted decline in trade intensity in 2020 is due to lower commodity prices. ... [R]emoving the effects of price changes ...  the share of real global output that is exported is expected to remain above its 2009 level in 2020. ...

Covid-19 has also accelerated the growth of international e-commerce. According to one study, cross-border discretionary e-commerce sales soared 53% year-on-year during the second quarter of 2020. Cross-border sales, nonetheless, accounted for only 10% of all consumer e-commerce transactions in 2018, suggesting ample headroom for additional growth. The share of online shoppers who made purchases from foreign suppliers rose from 17% in 2016 to 23% in 2018. An analysis by the McKinsey Global Institute forecasts that international business and consumer e-commerce could expand trade in manufactured goods by 6 – 10% by 2030.

For international flows of capital, the  report looks foreign direct investment and portfolio equity investment: "The distinction between the two is that FDI gives the investor (typically a multinational corporation) a voice in the management of a foreign enterprise, whereas portfolio equity investment does not. For statistical purposes, if the investor owns at least 10% of the foreign company, it is normally classified as FDI; below 10% it is deemed portfolio investment."

The UN Conference on Trade and Development (UNCTAD) forecasts that FDI flows will decline 30 – 40% in 2020, and that they are likely to slip another 5 – 10% in 2021, before starting to recover in 2022. The pandemic has crimped FDI flows through various channels: reductions in earnings available to invest, worsening business prospects, restrictions on business travel, uncertainty both in general and specifically about global supply chains, and so on. Nonetheless, double-digit drops in FDI flows are not uncommon, and certainly not as alarming as a similar drop in trade would be. For example, FDI flows shrank 43% in 2001 and 35% over a two-year period during the global financial crisis, and they have swung widely both up and down over the last five years due to changes in US tax policy.

For international investment in stocks, the general pattern in recent years has been as shift away from "home bias," where investors stick to their own country, and toward greater international diversification. "Portfolio equity stocks closed out 2019 at 37% of world stock market capitalization, just shy of the record level reported in 2018." This graph shows the monthly pattern of portfolio investment in emerging markets in 2020: a big dip in March, but then mostly a resumption of the usual pattern. 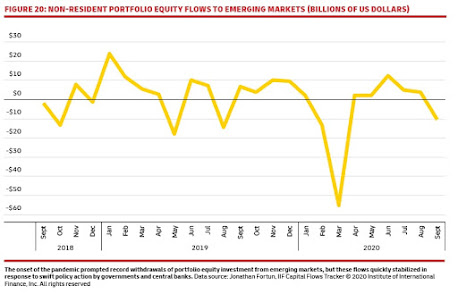 When it comes to flows of information, 2020 has been a remarkable year. As businesses, schools, and social lives shifted online with the pandemic, international internet traffic rose dramatically. As the figure shows, it has been rising about 20% per year, but in 2020 it rose almost 50%. 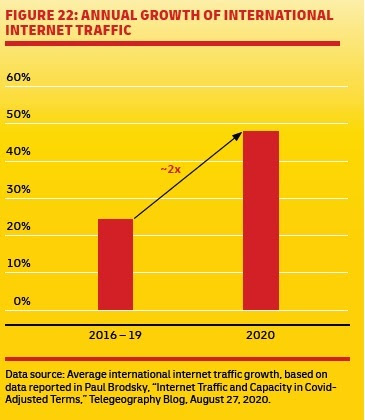 But on the other side, domestic internet traffic must be rising very substantially, too. The report notes: "The Internet continues to power large increases in information flows within and across borders, but international information flows are no longer consistently growing faster than domestic information flows. Covid-19 has caused data traffic to boom in 2020, but it remains unclear whether the pandemic has made the nature of information flows more—or less—global."

Flows of people across international borders have dropped dramatically, with no real sign yet of a bounceback. In terms of tourism, "The UNWTO [UN World Tourism Organization] does not foresee widespread lifting of travel restrictions until mid-2021 and forecasts that it will take 2.5 to 4 years for international tourist arrivals to rebound to their 2019 levels."
Flows of people who spread economic and education connections are way down, too:

Of course, if new international students keep staying away, the decline will accumulate over the next few years. In the world of academia, my sense is that lots of professors are experiencing a quality/quantity tradeoff: yes, attending a conference via Zoom has lower value-added, because of the loss of the personal touch, but on the other side, one can "attend" many more conferences.

The overall takeaway here is that globalization is resilient. Yes, it is taking a hit in 2020. But even if globalization were to decline somewhat, it would still be an important force in the economy. Here are a few more comments from Altman and Bastian:

Despite recent trade turbulence, the ratio of gross exports to world GDP is still remarkably close to its all-time high. Even after falling from a peak of 32% in 2008 to 29% in 2019, this measure of global trade integration is still 20% higher than it was in 2000, twice as high as it was in 1970, and almost six times higher than in 1945. ... Globalization can go into reverse—as demonstrated by the trendlines between the 1920s and 1950s—but recent data do not depict a similar reversal. ...

[T]he world is—and will remain—only partially globalized. Globalization can rise or fall significantly without getting anywhere close to either a state where national borders become irrelevant or one where they loom so large that it is best to think of a world of disconnected national economies. All signs point to a future where international flows will remain so large that decision-makers ignore them at their peril, even as borders and cross-country differences continue to make domestic activity the default in most areas.