The standard argument for government regulators who supervise the extent of bank risk is that if banks take on too much risk in the pursuit of short-term profits, but also raise the risk of  becoming insolvent, there are dangers not just to the banks themselves, but also risk to to bank depositors, the supply of credit in the economy, and other intertwined financial institutions. To put it another way, if the government is likely to end up bailing out individuals, firms, or the economy itself, then the government has a reason to check on how much risk is being taken.

But what if countries start to load up the bank regulators with a few other goals at the same time? What tradeoffs might emerge? Sasin Kirakul, Jeffery Yong, and Raihan Zamil describe the situation in "The universe of supervisory mandates – total eclipse of the core?"  (Financial Stability Institute Insights on policy implementation No 30, March 2021). 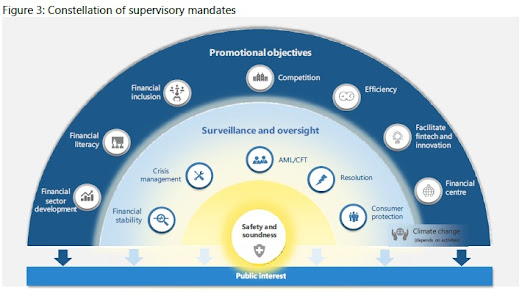 The basic goal of supporting the public interest is at the bottom, with the core idea of safety and soundness of banking institutions right above.  This is surrounded by five of what they call "surveillance and oversight" goals: financial stability; crisis management; AML/CFT, which stands for anti-money laundering/combating the financing of terrorism; resolution, which refers to closing down insolvent banks, and consumer protection. The outer semicircle then includes seven "promotional objective, which refers to promoting financial sector development, financial literacy, financial inclusion, competition in the financial sector, efficiency, facilitating financial technology and innovation, and positioning the domestic market as an international financial center.  Then off to the right you see "climate change," which can be viewed as either an oversight/surveillance goal (that is, are banks and financial institutions taking these risks into account) or a promotional goal (is sufficient capital flowing to this purpose).

There are ongoing efforts to add just a few more items to the list. For example, some economists at the IMF have argued that central banks like the Federal Reserve should go beyond the monetary policy issues of looking at employment, inflation, and interest rates, and also beyond the financial regulation responsibilities that many of them already face, and should also look at trying to address inequality.

For the United States, the current statutory goals for financial regulators include safety and soundness as well as the first five surveillance and oversight goals--although in the US setting these goals are somewhat divided between different agencies like the Federal Reserve, the Office of the Comptroller of the Currency, and the Federal Deposit Insurance Commission. There are also statutory directives for certain agencies to pursue consumer projection and and financial inclusion, and non-statutory mandates to promote financial literacy, fintech/innovation, and to in some way take climate change concerns into account.

In some situations, of course, these other goals can reinforce the basic goal of safety and soundness in banking. In other situations, not so much. For example, during a time of economic crisis, should the financial regulator also be pressing hard to make sure all banks are safe and sound, or should it give them a bit more slack at that time? Does "developing the financial sector" mean building up certain banks to be more profitable, while perhaps charging consumers more? What if promoting fintech/innovation could cause some banks to become weaker, thus reducing their safety and soundness and perhaps leading to less competition? Does the climate change goal involve bank regulators in deciding what particular firms or industries are "safe" or "risky" borrowers, and thus who will receive credit?

There's a standard problem that when you start aiming at many different goals all at once, you often face some tradeoffs between those goals. For example, imagine a person planning a dinner with the following goals: tastes appealing to everyone; also tastes different and interesting; includes fiber, protein, vitamins, all needed nutrients; low calorie; locally sources; easily affordable; can prepare with no more than one hour of cooking time; and freezes well for leftovers. All the goals are worthy ones, and with some effort, one can often find a compromise solution that fits most of them. But you will almost certainly need to do less on some of the goals to make it possible to meet other goals. (Pre-pandemic, one of the last dinner parties my wife and I gave was for guests who between them were vegetarian, gluten-free, dairy- free, and no beans or legumes. Talk about compromises on the menu!)

In the case of the regulators who supervise banks, the more tasks you give them to do, the less attention and energy they will inevitably have for the core "safety and soundness" regulation. Also, more goals typically mean that the regulators have more discretion when trading off one objective against another, and thus it becomes harder to hold them to account. Those who need to aim at a dozen or more different targets are likely to end up missing at least some of them, much of the time.