Debt and Deficits: Nostalgia for the 1980s

Back in the mid-1980s, the federal government under the Reagan administration ran what were widely considered to be excessive and risky budget deficits: from 1983 to 1986, the annual deficit was between 4.7% of GDP and 5.9% of GDP per year. The accumulated federal debt held by the public as a share of GDP rose from 21.2% of GDP in 1981 to 35.2% of GDP by 1987. I cannot exaggerate how much ink was spilled over this problem, some of it by me, back in those innocent and carefree time, before we learned to stop worrying and love the deficit.
The Congressional Budget Office has just released "The 2021 Long-Term Budget Outlook" (March 2021). There's nothing deeply new in it, but it made me think about how attitudes about budget deficits and government debt have evolved. The report notes:

At an estimated 10.3 percent of gross domestic product (GDP), the deficit in 2021would be the second largest since 1945, exceeded only by the 14.9 percent shortfall recorded last year. ... By the end of 2021, federal debt held by the public is projected to equal 102 percent of GDP. Debt would reach 107 percent of GDP (surpassing its historical high) in 2031 and would almost double to 202 percent of GDP by 2051. Debt that is high and rising as a percentage of GDP boosts federal and private borrowing costs, slows the growth of economic output, and increases interest payments abroad. A growing debt burden could increase the risk of a fiscal crisis and higher inflation as well as undermine confidence in the U.S. dollar, making it more costly to finance public and private activity in international markets.

Here are a few illustrative figures. The first one shows accumulated federal debt over time since 1900. You see the bumps for debt accumulated during World Wars I and II, and during the Great Depression of the 1930s. If you look at the 1980s, you can see the Reagan-era rise in debt/GDP.  But after the debt/GDP ratio had sagged back to 26.5% by 2001, you can see the the big jump for debt incurred during the Great Recession, and then debt incurred during the pandemic recession, and then where the projections under current law would take us.

From an historical point of view, you can think of fiscal policy during the Great Recession and the pandemic recession as similar to what happened during the Great Recession and World War II. In both cases, there were two huge stresses within a period of about 15 years, and the federal government addressed both of them with borrowed money. In historical perspective, those Reagan-era deficits that caused such a fuss were just a minor speed bump. However, what's projected for the future has no US historical equivalent.
This figure shows projections for annual budget deficits, rather than for accumulated debt. The figure separates out the amount of deficits that are attributable to interest payments in past borrowing (blue area). The "primary deficit" (purple area) is the deficit due to all non-interest spending. You'll notice that the primary deficit doesn't get crazy-high: it steadily grows from about 2.5% of GDP in the mid-2000s to 4.6% of GDP by the late 2040s. The problem is that the federal government gets on what I've called the "interest payments treadmill," where high interest payments are helping to create large annual deficits, and then large annual deficits keep leading to higher future interest payments.

If the government could take actions to hold down the rise in the primary deficit over time, with some mixture of spending cuts and tax increases (or does it sound better to say spending "restraint" and tax "enhancements"?), then this could also keep the US government from stepping on the interest payments treadmill.
This figure shows projected trends for spending and taxes, under current law. You can see the sepnding jump during the Great Recession, and then the jump during the pandemic recession. Assuming current law, projected tax revenues as a share of GDP don't change much going forward. However projected outlays do rise. 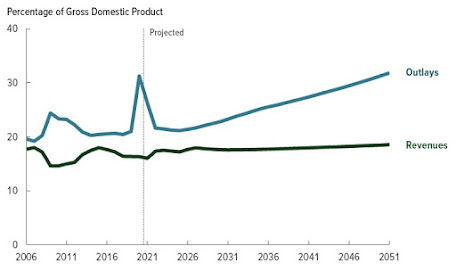 CBO explains the rise in outlays:

Larger deficits in the last few years of the decade result from increases in spending that outpace increases in revenues. In particular:

There's been some talk in recent years about how, in a time of low interest rates, it could be an excellent time for the US government to make long-run investments that would pay off in future productivity. This case has some merit to me, but it's not what is actually happening. Instead, the fundamental purpose of the US government has been shifting. Back in 1970, about one-third of all federal spending was direct payments to individuals: now, direct payments to individuals are 70% of all federal spending. The federal government use to have missions like fighting wars and putting a person on the moon: now, it cuts checks. The CBO has this to say about the agenda of using federal debt to finance investments:

Moreover, the effects on economic outcomes would depend on the types of policies that generate the higher deficits and debt. For example, increased high-quality and effective federal investment would boost private-sector productivity and output (though it would only partially mitigate the adverse consequences of greater borrowing). However, in CBO’s projections, the increasing deficits and debt result primarily from increases in noninvestment spending. Notably, net outlays for interest are a significant component of the increase in spending over the next 30 years. In addition, federal spending for Social Security, Medicare, and Medicaid for people age 65 or older would account for about half
of all federal noninterest spending by 2051, rising from about one-third in 2021.

For decades now, we have known that a combination of the aging of the post-World War II "baby boom" generation combined with rising life expectancies was going to raise the share of elderly Americans. We have also known for decades that primary programs for meeting the needs of this group--like Social Security and Medicare--have made promises that their current funding sources can't support. We have been watching US health care costs rise as a share of GDP For decades.  Meanwhile, the US economy has been experiencing slow productivity growth, which makes addressing all problems closer to a zero-sum game.

Neither during the Great Recession of 2007-2009 nor during the heart of the pandemic recession in 2020 and early 2021 was an appropriate time to focus on the long-term future of government debt. But averting our eyes from the trajectory of the national debt is not a long-term strategy.
Posted by Timothy Taylor at 10:00 AM