The word "exuberance" has a special meaning for investors. Back in 1996, then-Federal Reserve chair Alan Greenspan gave a speech as stock prices rose during the "dot-com" boom. He asked: "But how do we know when irrational exuberance has unduly escalated asset values, which then become subject to unexpected and prolonged contractions ...?" When the Fed chair starts "just asking" questions about exuberance, people take note.

Still, when those in the financial community use the language of "exuberance," my eyebrows go up. The March 2021 issue of the BIS Quarterly Review from the Bank of International Settlements uses "exuberance" a couple of times in a lead article, "Markets wrestle with reflation prospects" (pp. 1-16).   Here's a snippet (references to graphs and boxes omitted):

Equities and credit gained on the back of a brighter outlook and expectations of greater fiscal support, with signs of exuberance reflected in the behaviour of retail investors. ...

Low long-term interest rates have been critical in supporting valuations. Since recent US price/earnings ratios were among the highest on record, they suggest stretched valuations if considered in isolation. However, assessments that also take into account the prevailing low level of interest rates indicate that valuations were in line with their historical average. ...[E]quity prices are particularly sensitive to monetary policy in environments akin to the current one, featuring high price/earnings ratios and low interest rates.

Even if equity valuations did not appear excessive in the light of low rates, some signs of exuberance had a familiar ring. Just as during the dotcom boom in the late 1990s, IPOs [initial public offerings] saw a major expansion and stock prices often soared on the first day of trading. The share of unprofitable firms among those tapping equity markets also kept growing. In addition, strong investor appetite supported the rise of special purpose acquisition companies (SPACs) – otherwise known as “blank cheque” companies. These are conduits that raise funds without an immediate investment plan.

The increasing footprint of retail investors and the appeal of alternative asset classes also pointed to brisk risk-taking. An index gauging interest in the stock market on the basis of internet searches surged, eclipsing its previous highest level in 2009. This rise went hand in hand with the growing market influence of retail investors. In a sign of strong risk appetite, funds investing in the main cryptoassets grew rapidly in size following sustained inflows, and the prices of these assets reached all-time peaks ...

Here are some illustrative figures. The first shows the number and value of initial public offerings. 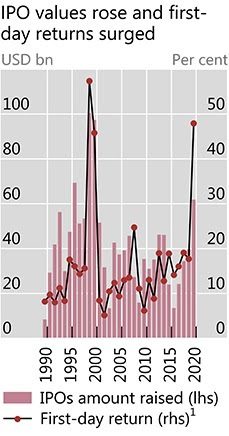 This figure shows the rise of the "blank cheque" SPAC companies. 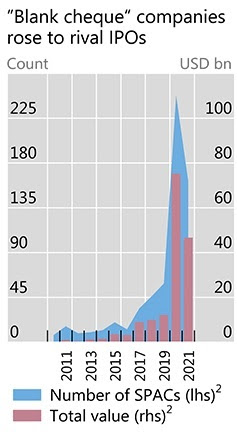 This figure shows data based on Google searches about interest in the stock market.

Sirio Aramonte and Fernando Avalos contribute a short "box" discussion to this article with more details on "The rising influence of retail investors." They write (the graphs to which they refer are included below):

Telltale signs of retail investors' growing activity emerged from patterns in equity trading volumes and stock price movements. For one, small traders seem to be often attracted by the speculative nature of single stocks, rather than by the diversification benefits of indices. Consistent with such preferences gaining in importance, share turnover for exchange-traded funds (ETFs) tracking the S&P 500 has flattened over the past four years, while that for the S&P 500's individual constituents has been on an upward trend over the same period, pointing to 2017 as the possible start year of retail investors' rising influence (Graph B, left-hand panel). In addition, retail investors are more likely to trade assets on the basis of non-fundamental information. During the late 1990s tech boom, for instance, they sometimes responded to important news about certain companies by rushing to buy the equity of similarly named but distinct firms. Comparable patterns emerged in early 2021 – for instance, when the value of a company briefly quintupled as investors misinterpreted a social media message as endorsing its stock.

In the United States, retail investors' sustained risk-taking has been channelled through brokerage accounts, the main tool they have to manage their non-retirement funds. Brokerage accounts allow owners to take leverage in the form of margin debt. In December 2020, the amount of that debt stood at $750 billion, the highest level on record since 1997, both in inflation-adjusted terms and as a share of GDP. Its fast growth in the aftermath of March 2020 exceeded 60% (Graph B, centre panel). There is evidence that retail investors are currently taking risky one-way bets, as rapid surges in margin debt have been followed by periods of stock market declines.

In seeking exposure to individual companies, retail investors trade options. Call (put) options pay off only when the price of the underlying stock rises (falls) past a preset value, with gains potentially amounting to multiples of the initial investment. In this sense, options have embedded leverage that margin debt magnifies further. Academic research has found that option trading tends to be unprofitable in the aggregate and over longer periods for small traders, not least because of their poor market timing.

Reports in early 2021 have suggested that the surge in trading volumes for call options – on both small and large stocks – has indeed stemmed from retail activity. For example, internet searches for options on five technology stocks – a clear sign of retail investors' interest – predicted next-day option volumes. This link was particularly strong for searches that took place on days with high stock returns, suggesting that option activity was underpinned by bets on a continuation of positive returns ...

Equity prices rose and fell as retail investors coordinated their trading on specific stocks through social media in January 2021. While online chat rooms were already a popular means of information exchange in the late 1990s, the trebling of the number of US internet users and the rise in no-fee brokerages since then has widened the pool of traders who can combine their efforts. In a recent episode, retail investors forced short-sellers to unwind their positions in distressed companies. A similar move in the more liquid silver market floundered a few days later. These dislocations were short-lived, not least because, in response to collateral requests from clearing houses, some brokerages limited their customers' ability to trade. Even so, it has become clear that deliberate large-scale coordination among small traders is possible and can have substantial effects on prices.

Certain actions of retail investors can raise concerns about market functioning. Sudden bursts of trading activity can push prices far away from fundamental values, especially for less liquid securities, thus impairing their information content. In a move that underscored the materiality of this issue, the US Securities and Exchange Commission suspended trading in the shares of companies that had experienced large price movements on the back of social media discussions.

Here's the figure showing how exchange-traded funds are being used more for individual stocks. 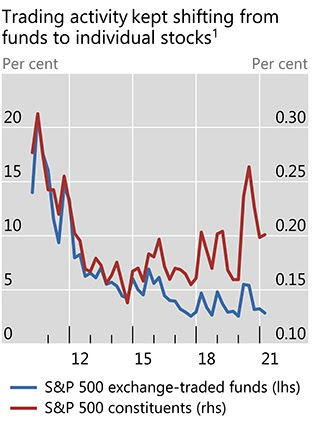 Here's the figure showing the rise in margin debt for retail investors. 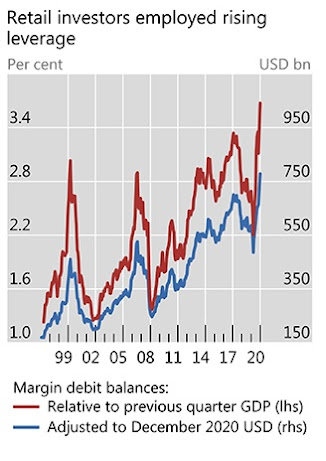 I'm certainly not in the investment advice business, and I'm very aware that Greenspan's 1996 comments about "irrational exuberance" were more in the middle of a stock market rise than at the end. That said, there do seem to be elements of occasional exuberance at play.
Posted by Timothy Taylor at 10:25 AM